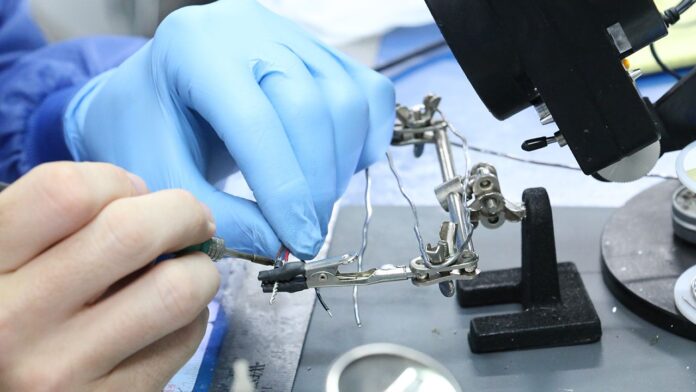 No, Timberline Manufacturing doesn’t make any type of wood-based products.

Nor does the company assemble boots or shoes.

So what is Timberline? If you’re not familiar with the Marion-based company, you’re not alone.

“I often describe us as one of the best-kept secrets in the Corridor,” president and CEO Tom Pientok said.

But to the OEMs and other downstream companies supplied by Timberline products, the company’s reputation is far from secret.

And while the company serves customers across the 48 contiguous states, Mr. Pientok estimated that 70% of Timberline’s revenue is sourced to Iowa-based clients.

“We depend on Iowa,” Mr. Pientok stated simply.

That Iowa-focused customer base wasn’t necessarily intentional, he added.

“I think it’s the fact that we’re a single-site location,” he said. “Iowa was our core as the company evolved, and we still only have one manufacturing facility, so geographically we’re located here. For our OEM customers, we’re close and convenient from a logistics perspective. Especially pre-COVID, it was very easy for a customer to work with our engineering team directly to help resolve a problem or a need.”

Still, for many of Timberline’s customers, being Iowa-based has its advantages, said Mr. Pientok, who came to his current role at Timberline after a long tenure leading Apache Hose in southwest Cedar Rapids.

“We work with some customers who love to keep their business in Iowa,” he said. “We definitely have a handful that are very loyal to the state.”

Timberline — so named by a completely random stab at an address in a phone book, as Mr. Pientok describes it — didn’t start in the specialized sphere of high-tech wiring assemblies and electrical components. Founded in 1993 by Mike Johnson and Mike Brummer at Mr. Johnson’s kitchen table, the company’s first contract was making battery pack spacers for Cedar Rapids-based Norand – ironically, Mr. PIentok’s employer at the time.

“For a handful of years, they figured out that contract manufacturing was a need, and they would build anything for anyone,” he said. “They did some assembly work for Fair-Play scoreboards, which are in about every gymnasium in the country, and for a host of smaller local companies. Then, business started to grow in the late 1990s, they decided that it was time to move from building anything for anyone to focus (their efforts), and the decision was made to home in on these electrical components.”

The company has marked several significant milestones since then. In December 2012, Mr. Johnson and Mr. Brummer sold the company to its employees, and Timberline became a full Employee Stock Ownership Plan (ESOP) operation, with a series of guiding principles for employee-owners prominently displayed in the company’s lobby.

That lobby is the gateway to the other significant company development — the opening of Timberline’s new, state-of-the-art facility in 2019, relocating the company to 1035 Blairs Ferry Rd., just west of the company’s original home on Lyons Road.

The new facility measures 90,000 square feet, double the size of its predecessor, and solved a few vexing issues Timberline had been facing.

“The old building served its need,” Mr. Pientok said. “It grew with us, and there were a number of additions. It got to the point that the building was so full. We could have added on there, but we decided it was time for a new facility designed to improve the workflow. We added some safety features and some innovations in material handling, plus it’s fully climate controlled.

“People drive by and say, ‘wow, it’s a beautiful facility,’” he added. “Certainly, it’s aesthetically beautiful, and we’re very proud of it, but it’s also functionally beautiful, so we were able to greatly enhance material flow and productivity.”

Timberline is now Marion’s largest manufacturer, employing an estimated 240 workers – about 70% of them in manufacturing and warehousing roles – and generating annual sales of nearly $40 million.

Even so, Timberline hasn’t been immune to the impacts of the COVID-19 pandemic, Mr. Pientok noted.

“At that time, we weren’t sure what was going to happen with our customer base,” he said. “We were fortunate that our key outsourced (companies) continued to produce and had good years. Plus, because of the border shutting down, companies were needing to find alternative sources of supply, bringing a level of production back.”

“One thing that became a real issue at that point was the ability to find labor, and that’s continued,” he noted. “The ability to attract and retain good labor is a real challenge. Also, we avoided major supply chain issues until about three months ago, when the supply chain crunch really started to hit us. People and parts are a daily challenge for us, so our supply-based lead times have increased significantly, in some cases by double or triple. There’s no question that demand is outstripping our ability to supply. It’s difficult to articulate that to our customer base. They’ve been stressed as the result of the stress on our supply chain and labor market.”

Despite those challenges, Mr. Pientok remains optimistic about his company’s outlook.

The future for Timberline is bright,” he said. “We’ve had great success throughout our history, and now we’ve grown to a point where we need to look at adding the right resources and invest in human capital. We’re always looking at ways to leverage technology to drive our growth and invest in our customer needs while remaining a customer-centric organization and not letting our growth get in the way of taking care of our customers. Timberline has built a great reputation in the industry, and our strategic plan calls for us to build a platform for growth and attack a couple of key areas within our product grouping.”