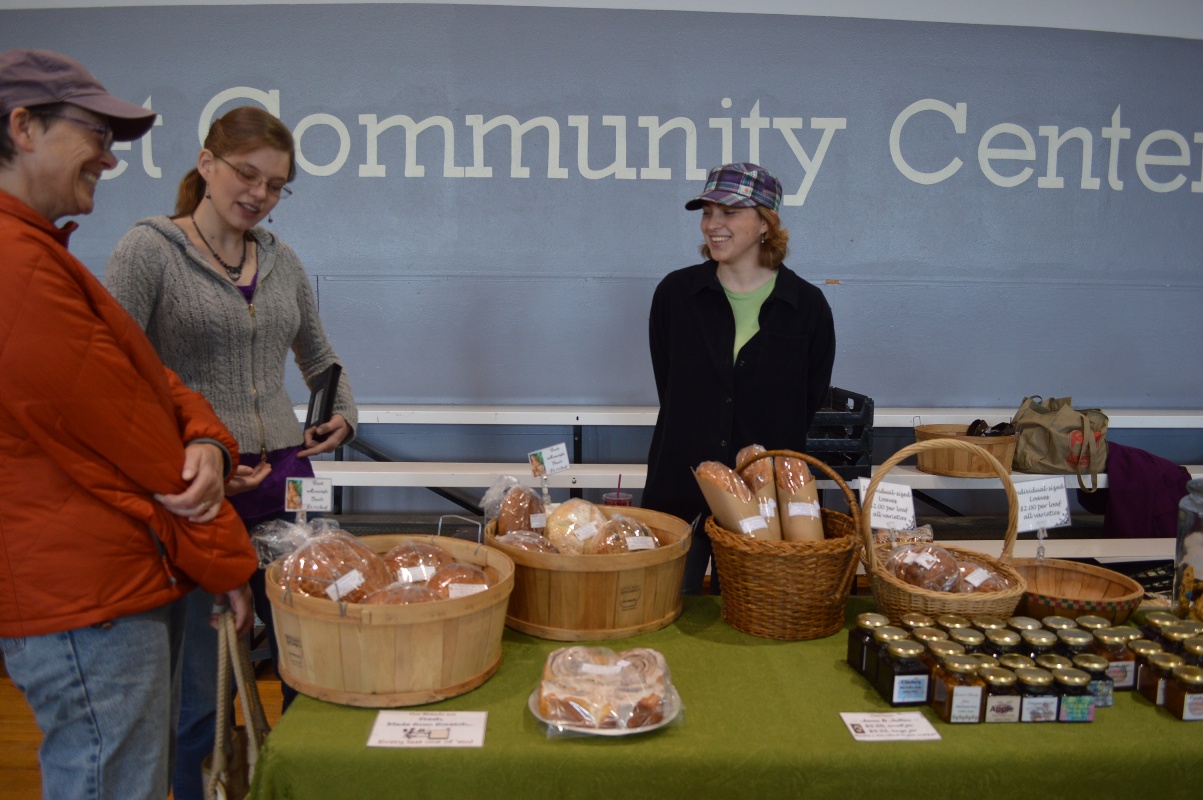 Danielle Martin and Laura Strabala are hanging up their baking hats after seven years of selling artisan breads and more at Eastern Iowa farmers markets.

The sisters, who operate Wild Prairie Acres in rural Lisbon, started at the Mount Vernon Farmers Market at the tender ages of 16 and 17. They expanded from there, including a regular spot at the summer Downtown Farmers Market in Cedar Rapids, but are now “retiring” from selling in their mid-20s.

“We hadn’t planned to make this any kind of a career,” said Ms. Martin, noting that the two will continue as Mount Vernon market managers, but will no longer sell their vegetables, herbs, baked goods, jam and jellies as they make time for other pursuits.

She is expecting her first child in August with her husband, Jeremy Martin, while her sister works as a senior caregiver in Iowa City.

Growers, bakers, farmers and craftspeople not only spend hours during cold mornings, rain or the heat of Iowa summers selling their products at area markets, but most days and nights are spent in preparation through gardening, baking and doing whatever it takes to provide fresh, local foods and goods for their customers.

That’s one of the reasons Iowa City is adding a new venue and day to its popular outdoor market season.

For years, Iowa City has had more vendors than space at its downtown market. A new Tuesday location will offer an opportunity for some of the vendors who don’t have a spot at that market, said Cassidy Bell, Iowa City’s market supervisor, in addition to an added site for some of the regular Iowa City vendors.

The downtown market will continue at the Chauncey Swan parking ramp on Wednesday nights and Saturday mornings beginning in May. In addition, Iowa City is building on an effort started last year during winter months inside the Iowa City Marketplace (former Sycamore Mall) by offering an outdoor venue at the mall from 3-6 p.m. Tuesdays.

Ms. Bell said about 50 vendors will participate in the market in the parking lot off Sycamore Street, beginning May 6.

“We’re hoping to have a continuing presence at Sycamore year-round,” she said, citing the weekly winter markets that began in November.

The Sycamore site replaces Iowa City’s year-old Mercer Market, which replaced a market that met outside Sycamore Mall for about a decade, Ms. Bell said. “So the Sycamore Market is a replacement for Mercer, but also a return to something that works,” she said.

Just across town, Ethel Madison was still contemplating this month whether or not the East Side Iowa City market would be able to resume this season, coming off a small turnout of vendors after its inaugural year in 2012.

Ms. Madison said the location is prime, near Rochester and Scott Boulevard, if at least six vendors would show interest.

“We only ran one year, and one year isn’t enough to get vendors and customers coming out,” she said of the Sunday market.

At the west end, University Heights Mayor Louise From said a new market that started last year will continue on the first Tuesdays of the month, beginning in June. More than 12,000 cars pass daily by the site, just two blocks west of Kinnick Stadium, providing good visibility along with a nice setting on Melrose Avenue, she said.

Mallory Smith, community development director for the city of Columbus Junction, said she hopes a new location for the farmers market there provides a better experience for both vendors and customers.

The site, in the new Youth Center building at the Louisa County Fairgrounds, is “too good to be true for a farmers market,” she said, citing cover from the elements, electricity, good visibility, ample parking, a kitchen and room for vendors to pull up in their vehicles.

Special events are planned for the second Friday of each month, beginning with a discussion May 9 by Chad Pregracke, the “Garbage Man of the Mississippi,” who was named CNN’s Hero of the Year in 2013.

Salsa-making contests, chili cook-offs and other events complement the farmers market experience at Columbus Junction and places like Washington, Iowa, where the longtime market will join in the city’s 175th anniversary celebration in June.

Kathy Tandy said the same is true at the farmers market in Oxford, where special community benefits are held each month, such as filling backpacks for school children in September.

While markets are often kept active through such community events, knowing when to retire as a vendor is a personal decision.

“With age, I decided I can sit and crochet,” said Yvonne Gregory, who would make 800 jars of jelly to sell, along with baked goods and produce, when she first started as one of the organizers of the Tipton Farmers Market, now in its 31st year.

She and her husband, who are retired farmers, live south of Tipton and Ms. Gregory remains involved as a co-manager of the farmers market.

“We have to make it, bake it or grow it ourselves,” she said of the items sold at the market, acknowledging the hard work involved for the vendors.

Bernie Oberhauser cited that extensive effort in deciding to retire from the La Porte City Farmers Market this year, at age 81.

“It’s been a long haul,” he said of his 21 years at the market, where he made an appearance every Friday to sell radishes, peppers, tomatoes, beets, egg plant, sweet corn, squash and watermelon. “I grew just about everything.”

He still plans to stay busy with his personal gardening and helping at the nursing home in La Porte City.

Ms. Martin and Ms. Strabala also will keep gardening and baking, but for family and friends rather than customers.

The sisters, who started as vendors in 2007, will sell their last cinnamon rolls at Mount Vernon’s indoor market on April 26.

“It was only supposed to last one year and that was it,” Ms. Strabala said with a smile. “Most things don’t work out like I plan anyway.”