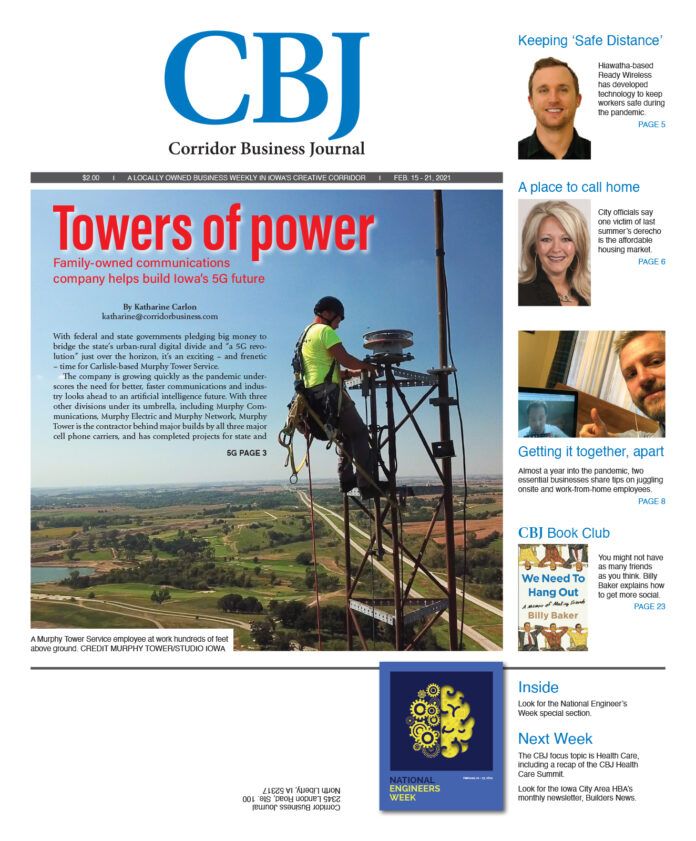 With federal and state governments pledging big money to bridge the state’s urban-rural digital divide and “a 5G revolution” just over the horizon, it’s an exciting – and frenetic – time for Carlisle-based Murphy Tower Services.

The company is growing quickly as the pandemic underscores the need for better, faster communications and industry looks ahead to an artificial intelligence future. With three other divisions under its umbrella, including Murphy Communications, Murphy Electric and Murphy Network, Murphy Tower is the contractor behind major builds by all three major cell phone carriers, and has completed projects for state and local governments, colleges and universities, utilities, and companies like Bechtel Communications and Ericsson.

“We are a wireless and wireline (fiber) infrastructure contractor, helping to build out the 5G revolution across the Midwest,” explained Jane Murphy, strategic communications advisor for the family-owned company that has grown to about 120 employees over its 20-year history, adding it is working to “help fulfill the governor’s priority to close the digital divide in Iowa.”

The full-service soup-to-nuts communications company offers end-to-end wireless and wireline construction services, from directional drilling for installation of high-speed fiber in the ground to building entire cell sites and towers that reach high into the sky.

Over the past several years, the company has left a mark on the Corridor, completing small cell build-outs to enhance communications at University of Iowa Hospitals and Clinics, Kinnick Stadium, Hancher Auditorium and other UI buildings on behalf of Verizon; Murphy Network installing Distributed Antenna System (DAS) radio and equipment at both the stadium and the UI’s Carver Hawkeye Arena to improve wireless signal for US Cellular and T-Mobile; and Murphy Communications installing fiber-to-home for Sharon Telephone Company serving Hills, Sharon Center, Frytown and rural Riverside.

Now Murphy Tower hopes to be a big player in the state’s acceleration toward a 5G future.

“We do basically everything from underground to the tops of these towers to in-building,” Ms. Murphy said. “And yes, it’s all related to that 5G rollout.”

The target of unfounded conspiracy theories, Murphy Tower co-owner and CEO Pat Murphy calls 5G “the latest and greatest” generation of wireless cellular service, offering a theoretical hundredfold increase in speed over 4G LTE, although cell phone carriers are so far nowhere near that kind of velocity.

5G’s predecessors all brought incremental improvements. 2G, which debuted in 1991, made cell phones more than just toys of the wealthy by switching from analog to digital transmission, making way for innovations like text messaging. In 1998, 3G allowed mobile and wireless internet connection, transforming the phone into an on-the-go entertainment system. 4G, the standard since 2008, added high-speed web and ushered in the smartphone revolution, powering photo sharing, video streaming, social media, e-commerce and a panoply of apps that are now seamless parts of everyday life.

5G promises unlimited data capacity, ultra-fast speeds and a significant decrease in network latency – the time between the sending of a given piece of information and the corresponding response. For consumers, that means the possibility of seamless videoconferencing and video-game streaming, making driverless cars a reality and the emergence of multisensory digital content thanks to increased capacity to support virtual and augmented reality and 3D technologies.

But, said Mr. Murphy, one of the most revolutionary shifts 5G will bring is in the manufacturing sphere, allowing for more automation, more artificial intelligence and the realization of the Internet of Things – the rapidly expanding universe of devices that instantly collect, transmit and share data over the internet. Tomorrow’s factories are likely to be filled with sensors, each monitoring different aspects of the working environment and interoperating with each other.

“One of key things about 5G, in a general sense, is the average person with a phone thinks in terms of what it will do for their device, but the much greater impact will be on manufacturing and industry and things like the Internet of Things, machine learning and artificial intelligence – what’s being called Manufacturing 4.0,” Mr. Murphy said, estimating manufacturers could ultimately see 15 to 25% gains in productivity as a result. “Factories of the future will have fewer people in them, with predictive analysis and embedded sensors feeding wirelessly within the building and fueling some impressive [productivity] gains. 5G is going to make the pipeline really fast with no latency.”

He’s not alone in that opinion. According to KPMG, the manufacturing industry is likely to be the first to significantly unlock the value of 5G, providing a 5% boost to the average bottom line thanks to agility, speed and productivity improvements. A report by the accounting firm suggests smart 5G-enabled sensors could allow machines to update themselves, initiate a new process when there is demand and assess the quality of components that are being manufactured in real time.

“Don’t get me wrong, [5G] is great for phones, but the biggest impact will be on industry,” Mr. Murphy said. “Manufacturers have got to start thinking about Manufacturing 4.0 or a very significant amount of them are going to get left behind.”

So far, according to 5G maps of the state and region, coverage is spotty and confined mostly to metro areas like Cedar Rapids and Iowa City, here in the Corridor. And while all major cell phone carriers are touting 5G offerings, Mr. Murphy said, what is actually available varies considerably from one company to another, with “true 5G” probably several years away.

The closest Iowa comes to that right now might be found in Des Moines, which in late 2019 became Verizon’s 20th city to receive “5G Ultra Wideband,” which uses millimeter wave spectrum technology to power its service. But even there, the coverage area is limited and something of a block-by-block proposition, Mr. Murphy said.

Though Iowa is on par with the rest of the country in terms of 5G rollout, at least in metro areas, “We’re not anywhere close to [full 5G], we’re just getting started,” he said, adding full coverage is a couple of years away. “For now, it’s not ubiquitous.”

That’s partly because 5G uses higher frequencies previously used for short-range devices like cordless phones to relay information. While that increases speed and the amount of information users can access, it also means the signal doesn’t travel very far, is easily blocked and requires carriers to place small-cell transmitters in a dense network, boosted by specialized antennas and reflectors.

“Some of the 5G technology we’re installing is not really true 5G,” Mr. Murphy said. “Standalone 5G, which is what’s going on in Des Moines, is true 5G. The other kind is called [Dynamic Spectrum Sharing] where you’re running it on 4G LTE, but with upgraded radio and software. T-Mobile is making the marketing case it’s 5G, but it’s really kind of 4G LTE on steroids … it’s running on the platform that has been around for years.

“Right now, what they’re calling 5G is a little bit smoke and mirrors,” he added. “But it is coming.”

Also coming down the pike is plenty of work bringing high speed broadband to the rural Midwest, a major focus of former Federal Communications Commission Chairman Ajit Pai and of Gov. Kim Reynolds, who named a $450 million investment for rural broadband expansion among her top priorities in last month’s Condition of the State address.

“Let’s plant a stake in the ground and declare that every part of Iowa will have affordable high-speed broadband by 2025, and we’ll get there by committing $450 million over that time period, which will leverage millions more in private investment, giving Iowa the biggest build-out of high-speed Internet in the country,” Ms. Reynolds said.

The governor’s Jan. 12 announcement follows a late 2020 FCC announcement it had awarded nearly $144 million to 11 broadband providers to bring high-speed internet to rural Iowa as part of its Rural Digital Opportunity Fund Phase I Auction, with nearly 85% of eligible locations to receive Gigabit service.

Mr. Murphy said that, too, will keep Murphy Tower busy in the years ahead.

“5G is the latest generation of wireless, but without wireline in the ground, there’s no such thing as wireless … And the more remote you are, the more reliable fiber line is,” he said. “The FCC has $20 billion allocated [nationwide] for rural service. They’re spending hundreds of millions in Iowa, and the state has added $450,000 on top of that. Add that to all of the federal grant money, and you’re talking north of a billion dollars in investment.”

Mr. Murphy’s roots in the industry go back to the early 1990s when his father, owner of what was then Murphy Construction, began building cell towers. He, along with two siblings, bought the former construction company in 2004, launching Murphy Tower Service, which has since branched out into a full-service provider of wireless and broadcast construction and maintenance services.

The company has grown quickly in recent years, with between 40 and 60 new employees coming on board over the past two years and an average of 30% revenue growth every year between 2011 and 2019. Even last year, despite the COVID-19 pandemic grinding the industry to a halt for a three-month period, the company managed to post 19% growth.

But despite average annual industry wages of $77,500 annually, workforce has been an issue both nationally and here in Iowa. A coalition of telecommunications industry organizations, including the National Association of Tower Erectors, recently called on Congress and the Biden Administration to support broadband infrastructure legislation paving the way for employers to expand registered apprenticeships and help pay for associated technical instruction and certification costs. To make their case, the coalition pointed to estimates that broadband and 5G projects will create three million wireline and wireless jobs and contribute $500 billion annually to the U.S. economy.

“In the wireless world, it’s always been difficult to find tower climbers,” said Mr. Murphy, adding that having a workplace 350 feet in the air is cold and windy work that’s not for the faint of heart. The industry also faces a shortage of journeymen electricians and directional drill operators, something Murphy Tower is addressing through competitive pay, strong benefits and attention to culture.

“There’s an incredible amount of work to do, it’s a fast-growing industry,” he said. “There are lots of hurdles to jump, but there’s so much going on.”