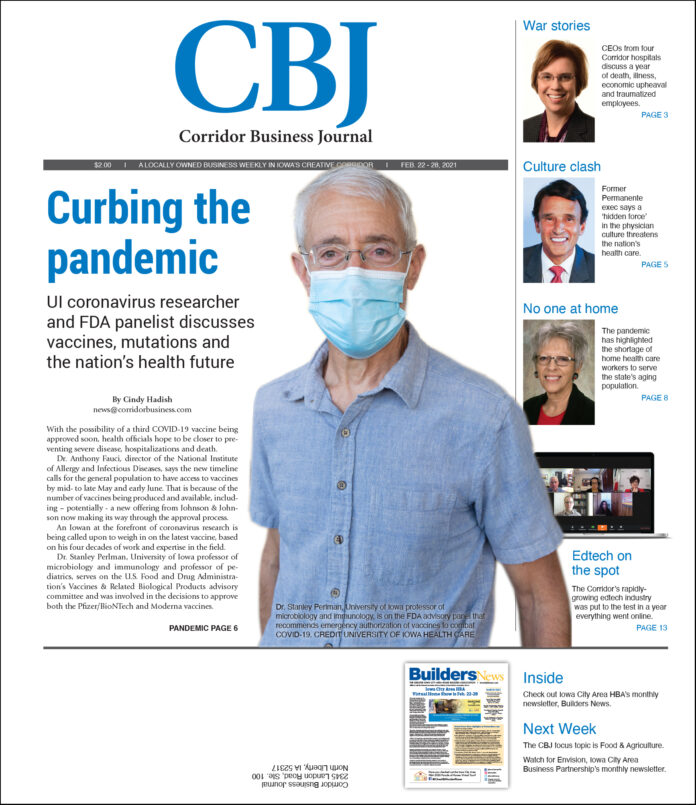 With the possibility of a third COVID-19 vaccine being approved soon, health officials hope to be closer to preventing severe disease, hospitalizations and death.

Dr. Anthony Fauci, director of the National Institute of Allergy and Infectious Diseases, says the new timeline calls for the general population to have access to vaccines by mid- to late May and early June. That is because of the number of vaccines being produced and available, including – potentially – a new offering from Johnson & Johnson now making its way through the approval process.

An Iowan at the forefront of coronavirus research is being called upon to weigh in on the latest vaccine, based on his four decades of work and expertise in the field.

Dr. Stanley Perlman, University of Iowa professor of microbiology and immunology and professor of pediatrics, serves on the U.S. Food and Drug Administration’s Vaccines & Related Biological Products advisory committee and was involved in the decisions to approve both the Pfizer/BioNTech and Moderna vaccines.

If approved, the vaccine would become the third available for emergency use in the United States, joining those from Pfizer/BioNTech and Moderna. The committee makes its recommendation to the FDA, which can authorize the use of measures such as vaccines during public health emergencies, including the pandemic.

While Dr. Perlman declined to comment specifically about the vaccine before the committee meets to avoid bias, according to Johnson & Johnson, the shots were shown to be 72% effective in the U.S. and 66% effective overall in preventing moderate disease.

Notably, it was 85% effective at preventing severe disease and demonstrated 100% protection against COVID-19-related hospitalizations and deaths within 28 days of the single shot.

The moderate disease efficacy is lower than Pfizer and Moderna trial results, in which both were about 95% effective at preventing infection, but Dr. Perlman noted those studies were conducted before newer COVID-19 variants were circulating, so a comparison is difficult.

“One issue with Operation Warp Speed is that the vaccines have never been compared,” he said, adding that ideally, groups of similar individuals could be studied with various vaccines in the same time frame: something not practical in the current emergency.

That isn’t to say the vaccines are unsafe.

“They work very well,” said Dr. Perlman, who has received the Pfizer shots. “They’re very safe and they’re amazingly effective. There’s really no downside to getting a vaccine.”

Although the vaccines have not been compared scientifically, Johnson & Johnson has at least two advantages: only one shot is needed, versus two doses spread either 21 or 28 days apart for the Pfizer and Moderna vaccines, and the Janssen vaccine does not require the ultra-cold needed for storage of the Moderna, and especially, Pfizer vaccines.

Johnson & Johnson’s technology also differs from the Moderna and Pfizer vaccines, which use messenger RNA (mRNA) – the first mRNA vaccines to receive FDA authorization – compared to the adenovirus-based Janssen vaccine.

In addition to serving on the FDA committee, Dr. Perlman’s nearly 40 years of coronavirus research has informed vaccine development, and he was part of the international committee that named the virus SARS-CoV-2.

He participated in the Dec. 10 and Dec. 17 teleconference meetings that recommended the FDA authorize the Pfizer and Moderna vaccines for emergency use, and while an exact timeline for the Johnson & Johnson vaccine candidate is unknown, those vaccines were authorized the day after the committee meetings.

Even though the virus is mutating, Mr. Perlman said the vaccines, so far, appear to work against the new variants.

Dr. Perlman said given logistical issues, any needed modifications would not happen immediately. In other words, the public should not wait to get a shot, thinking an improved vaccine might be on the horizon.

Coronaviruses are responsible for illnesses as mild as the common cold but have gained notoriety in recent years due to the emergence of new and deadly virus types. During a 2003 SARS outbreak, a total of 8,098 people worldwide became sick with SARS and 774 people died, according to the World Health Organization. Relatively few people in the United States were infected, compared to nearly 28 million U.S. cases of COVID-19 as of mid-February, with deaths approaching 500,000 in the United States alone, according to the U.S. Centers for Disease Control & Prevention.

Dr. Perlman said COVID-19 is more easily transmissible, and measures immediately undertaken in previous outbreaks, such as contact tracing and quarantining – “all of the things that could have made the outbreak smaller” – were not done sufficiently for COVID-19 in the U.S.

Making the nation’s response a political issue, with little federal leadership, did not help, he added.

“It’s very frustrating,” Dr. Perlman said, citing people who still claim the virus “isn’t a big deal,” especially given that two of his own relatives have died of COVID-19.

Iowa had an advantage with its rural population, which kept the spread at bay, at least initially, compared to more highly populated states where people “are always in confined spaces,” he noted.

While it is uncertain how long immunity lasts for COVID-19 survivors, those cases, and the growing number of people receiving the vaccine, combine to provide “herd immunity,” when a virus cannot find people who are susceptible.

“What I’m hoping is that it actually becomes weaker,” he said of COVID-19, which would make it similar to a common cold virus, making annual vaccines unnecessary.

When it comes to concerns keeping him up at night, Dr. Perlman cited the possibility that the virus would mutate more than he currently predicts, along with another issue that goes beyond science.

“A lot of people are not doing so great. What’s going to happen to them?” he said, referring to job losses and the economy. “That’s what I’m worried about more.”