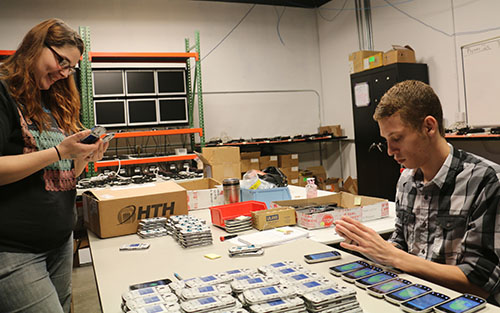 HIAWATHA—The Federal Communications Commission’s Lifeline program is intended to be exactly that: a lifeline for low-income Americans who otherwise couldn’t afford a cellular or landline phone.

But the traditional cellular voice and texting phone services addressed by the Lifeline program and providers such as enTouch Wireless in Hiawatha have been waning in importance, as more consumers require data plans on their phones to access web-based services and apps.

New FCC rules rolled out March 31 will modernize Lifeline by adding broadband Internet connectivity services. They point to good things ahead for enTouch, which has been an early provider of broadband-ready smartphones and data plans to consumers in the program.

“We were among the first to include access to data in the product,” said Kim Lehrman, enTouch president, who sees the firm as well-positioned to serve the broadband market under Lifeline.

Lifeline consumers currently receive $9.25 per month in assistance to obtain wireless airtime, or even landline phone service if they prefer it. That amount won’t go very far with data plans that the new rules envision, however, invoking the need for copayments by enrolled consumers.

Service providers like enTouch will be competing to offer not only the best phones and service, but an assortment of “top-up” services that consumers can purchase to get the best use of the subsidy and service for their own style of communication.

One of the advantages enTouch has on its side is its sister company. Ready Wireless provides many “back-end” services to Lifeline service providers, including services that enable their phones to work with the major wireless networks owned by companies such as Sprint, Verizon and AT&T. The company had its origins as a reseller of prepaid wireless services, but shifted its business model as more of the wireless business it had targeted went to the Lifeline program, which expanded into cell phones during President George W. Bush’s second term.

Both Ready Wireless and enTouch are owned by HH Ventures LLC, and located in the same building in Hiawatha. The technology platform and market insights of Ready Wireless will help enTouch as it addresses the changing broadband market under Lifeline.

By contrast, the new rules are “very disruptive to most of our competition in this space,” HH Ventures CEO Dennis Henderson said. “They don’t have the retail experience. They’re not wireless operators.”

Ms. Lehrman and Mr. Henderson both see the new broadband rules as heading the Lifeline program in the right direction.

“About half of the houses under $25,000 income in the United States don’t have access to broadband,” Mr. Henderson said. Lacking access to the Internet, they are excluded from participating in the economy in the same way as average Americans, such as applying for jobs or doing homework online, or using certain government programs and services.

Ms. Lehrman is proud of enTouch’s leadership in offering smartphones and data plans to Lifeline customers. She said enTouch customers have become quite adept at using public Wi-Fi access points to extend the benefits of their broadband service.

Providing Lifeline service is a highly regulated business that is about to become even more regulated. But that is also seen as an advantage by enTouch, because it is a barrier to entry by other carriers.

“It drives the need for scale in this business,” Mr. Henderson said, adding that he expects the changes to fuel consolidation among Lifeline suppliers. He said many players in the market have been considering when to make strategic moves such as divesting or expanding, but it was impossible until the rules came out to estimate the value of such businesses.

The new rules will squeeze out demand to provide voice services under Lifeline by requiring service providers to provide progressively more minutes of voice service each year for the same reimbursement. It’s widely expected that service providers will begin substituting some type of VOIP (voice over Internet protocol) phone service with their data plans to substitute for voice, Ms. Lehrman said.

Lifeline requires both Federal Communications Commission and state approval to offer service. enTouch received FCC approval in 2012, and has since gone from zero subscribers to 110,000 under the Lifeline plan. It has also received approval to offer its service in 24 states – enough to address 57 percent of the potential Lifeline market.

Ms. Lehrman said enTouch’s own marketing of its Lifeline service reflects the unique and relatively low-income demographic of its clientele. It includes sales outlets at small bodegas and ethnic groceries, advertisements on radio and late-night television, and direct marketing at events that attract individuals likely to be eligible.

Mr. Henderson says enTouch is still the smaller part of HH Ventures’ business, which employs about 170, but he couldn’t be more pleased by how it’s grown.

“She [Ms. Lehrman] has built the business from nothing to a very profitable machine,” he said. “Probably the best decision we have made is to have her lead this project.”

The new FCC Lifeline rules take effect on Dec. 1, and while enTouch has a lot of work to do to get ready, it’s in a far better position to comply than most rivals, according to Ms. Lehrman.

“I sometimes say we’re a compliance company that knows how to do distribution and phones,” she said.