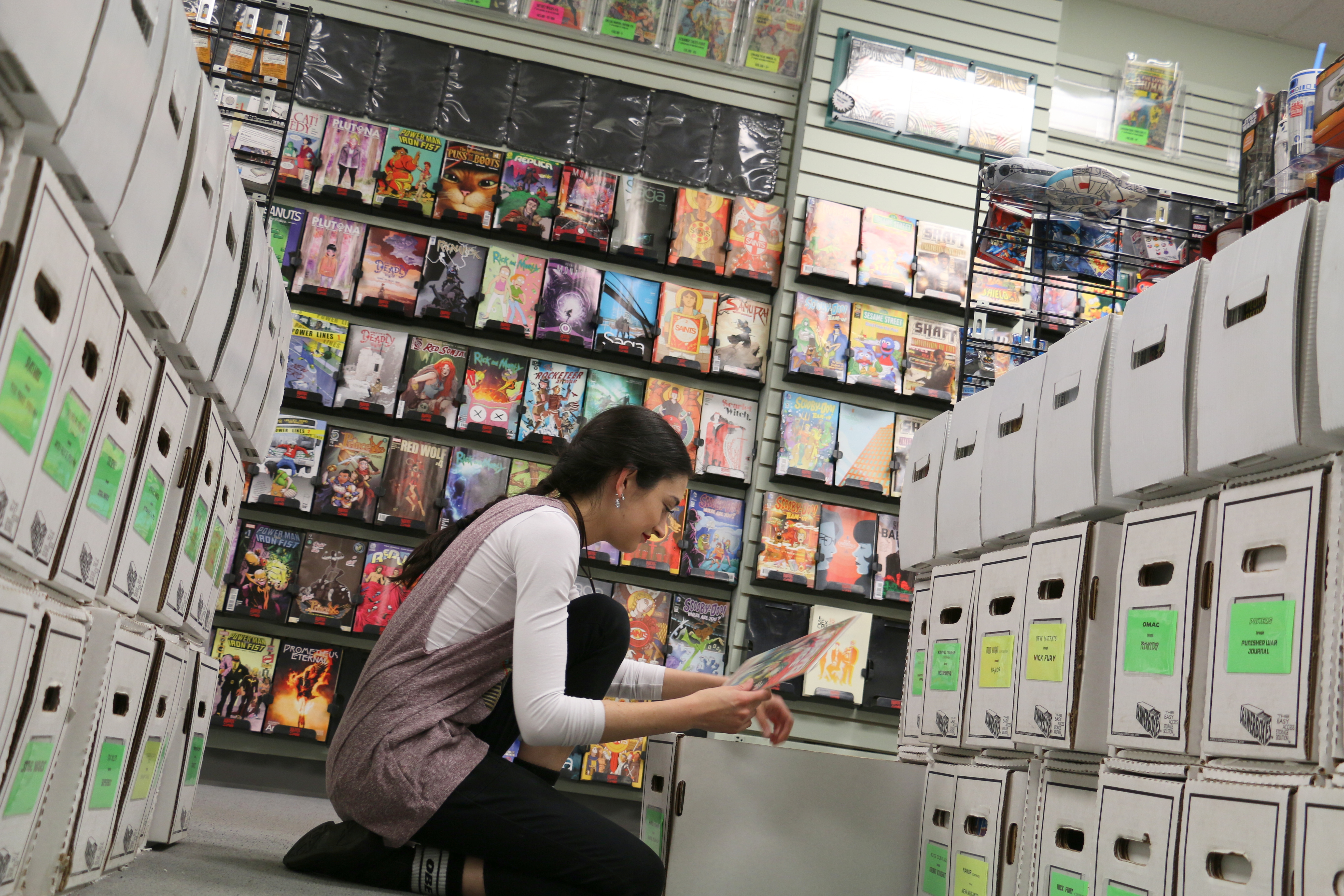 Customer Alexis Smith thumbs through back issues at Daydreams Comics on May 2.

Daydreams Comics, the quaint shop on Dubuque Street in downtown Iowa City, appears on the surface to be everything a superhero is not: quiet, friendly and easily accessible.

Yet beyond the mild-mannered facade — including the actual building, which dates back to the turn into the 20th century — lay something magical that’s granted the business 30 years of success.

For patrons like Alexis Smith, that magic is the ability to slow time.

Ms. Smith moved to Iowa City from Orlando, Florida, in 2006, and said the early years of that transition were difficult. In a new environment, she said she initially found herself trying to fit in at the expense of being herself. Part of that compromise, she said, was avoiding cartoons and comics — pastimes she forged as a kid with her father, who also shops at Daydreams.

“So I surrounded myself with a bunch of friends who accept me for who I am now, and cartoons are a huge part of that little nerdy side of me that I love and embrace,” Ms. Smith said, adding that perusing the store’s shelves can even help fight depression and anxiety.

“Just coming here and looking at all the comic books they have helped with that,” she said. “It kind of slows things down a bit.”

For store owner Zach Power — who occasionally has to clarify that Power is not an alias, but is in fact his real last name — the magic of Daydreams is making boyhood dreams come true.

Growing up in Burlington, his family would frequently visit downtown Iowa City, which allowed the 10-year-old to browse Daydreams’ comics while his mother ran errands.

“One time we were talking, and I turned to my mom and said, ‘Mom, someday I want to own a store like this,’” Mr. Power said. “And sure enough, however many years later, I owned that exact store.”

Although the store’s location has since changed, its neighborhood character remains the same. Daydreams Comics first launched in 1986 on Iowa City’s Ped Mall, or more specifically, in the area referred to as the “Hall Mall,” an interior hallway on the second floor above what’s now Film Scene and Velvet Coat.

The business relocated in 1993 and again in 1999 to neighboring first-floor storefronts on the Ped Mall before finally settling into the Daydreams’ current space at 21 S. Dubuque St., which has become the store’s longest-running location.

After taking classes at Southeastern Community College and the University of Iowa, Mr. Power took a job detailing cars at Carousel Motors in Iowa City, where he worked for about three years.

“The grind was kind of intense sometimes, and it just got to the point where it wasn’t worth waking up in the morning to make pretty decent money, but to really hate going to work [and] hate coming home tired,” Mr. Power said. “So one day, I just quit.”

Shortly after, he inquired about employment at Daydreams and started working there in 2002. Since then, the store has undergone several ownership changes, but always “stayed in the family” amid a tight-knit group of supporters.

The store was founded by Michael Zeadow, who later sold it to his then-son-in-law, Adam Mix. His plans to move abroad prompted another sale to Don Hughes, a former “silent partner” and current band director at Washington High School in Washington. With ownership split between the two, Mr. Power bought Mr. Hughes out in 2010, then purchased the remaining shares from Mr. Mix last year to become the full owner.

“At the end of the day, I wake up every morning, and I’m stoked,” Mr. Power said. “I own my own business, I sell comic books for a living and I answer to me.”

Clear Lake native Adam Mix started at Daydreams in 1996, when he walked in as a university student and asked about work while he finished his degree. Later that day, he said, he received a phone call offering him a job.

“I just started shopping there, and I never really left,” Mr. Mix said.

The following year, Mr. Mix graduated from the University of Iowa and began dating Crystal Zeadow. The couple got married in 2000, and the potential to buy the business grew, in part because of the deteriorating health of his father-in-law, store founder Michael “Chief” Zeadow, who died in 2013.

“Obviously I loved the store, and her dad was someone I loved very much,” Mr. Mix said. “Had I not [purchased Daydreams], I think probably the business would have gone with him.”

With a growing desire to oversee Daydreams, Mr. Mix abandoned graduate studies in library science at the University of Wisconsin in order to pursue the shop, and returned to Iowa City in 2001.

Around the same time he purchased back a portion of his shares in 2006, Mr. Mix also began writing books—specifically, romance novels, which he continues to ghostwrite for several authors. He still serves as an advisor on some of the store’s operations, however, and said he’s enjoyed watching Daydreams evolve.

“It’s different, and is more accessible to more people, and I think we were able to introduce people to a wider spectrum of comics—things that they enjoy,” Mr. Mix said. “I really do believe Daydreams is one of the nicest comic shops in America.”

Mr. Power said the comic book industry hit a peak in the early 1990s, fueled in part by speculators seeking the next big issue. According to some observers, also partly to blame were publishers such as Image Comics and Marvel, which saw an opportunity to raise cover prices while implementing “gimmicks” like the publisher’s provocative Death of Superman storyline in 1992. According to the Jan. 18, 2002, issue of Comics Buyer Guide, sales plummeted between 1993 and 2000, dropping by nearly half.

“They were literally just printing and printing,” Mr. Power said of the industry at that time. “There was no real demand after the fact. Everyone was buying 20 copies of books, and it was overkill.”

Recent national sales figures, however, suggest the industry has at least partially rebounded. Publishers Weekly, for example, recently reported that comics and graphic novels nationally generated close to $870 million in 2014, which was the industry’s strongest year since 1993.

Mr. Power said those reignited sales are partially driven by the onslaught of recent superhero movies. The embrace of superheroes by the mainstream has also spawned new fans, and has even added exposure for some of the store’s more prominent patrons.

Among them is novelist and comic writer Max Allan Collins, a Muscatine resident whose body of work includes Road to Perdition, a graphic novel so successful that it was adapted in 2002 into a film starring Tom Hanks.

“This town has always been very diverse,” Mr. Power said. “Whether it’s male, female, young old, superheroes … have a wide demographic, which is great, and a big part of the reason why we’re successful.”