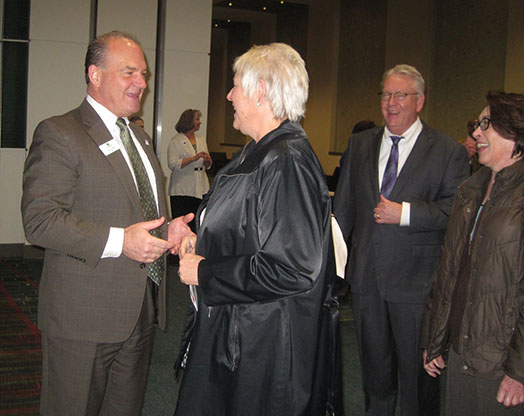 CEDAR RAPIDS—Selling the city-owned the DoubleTree by Hilton hotel and seeking alternatives to federal funding of flood control are a few of the major decisions facing Cedar Rapids leaders, Mayor Ron Corbett said in his Feb. 24 State of the City address.

The city invested about $40 million to secure and transform the failing Crowne Plaza Hotel into the DoubleTree by Hilton Cedar Rapids Convention Complex. Mr. Corbett said the hotel is meeting its occupancy goals and bringing an average of 175,000 people each year to the attached U.S. Cellular Center, stimulating the local economy.

“We are thrilled with the results, but it was never our goal to own the hotel long-term,” Mr. Corbett said of the DoubleTree, which hosted the event.

Mr. Corbett did not say how much operating the hotel is costing the city or call for selling it to a private operator, but he made it clear he thinks the time for serious discussion is approaching. Just like a homeowner interested in selling, he said the city will have many preparations to complete if it does.

“Since the hotel is tied to the arena and the convention center, it is a very complicated asset,” Mr. Corbett said. “A myriad of agreements like naming rights and management responsibilities will have to be renegotiated.”

Recovery from the flood of 2008 has been a top priority for Mr. Corbett. He said Congress has approved the city’s flood protection plan, but appropriated no federal money for it. Cedar Rapids has limited funding for projects and will protect its most vulnerable areas first, with work beginning this summer in the NewBo, Sinclair and Czech Village areas.

The concern of city leaders is that the inflation factor used by the federal government to calculate the cost-benefit ratio of flood protection projects competing for funds is 4.25 percent –

much higher than real inflation in recent years.

“Unless the value of the property to be protected is increasing at an equal rate, our ratio drops, moving our project lower and lower on the funding list,” Mr. Corbett said. “We are in serious risk of never being funded.”

“How much longer should we wait for federal funding before we pursue other funding options?” he added. “What other options are there? Is this a project we should attempt to fund ourselves?”

Departing from the song lyric themes that have tied together his previous annual speeches, Mr. Corbett this time used a baseball metaphor. He described a difficult experience umpiring a baseball game in his youth, saying it taught him that difficult calls are necessary, and sure to attract criticism. He went on to outline three “right calls,” under his leadership that have been criticized, along with one wrong call.

Establishing the MedQuarter Regional Medical District and vacating a section of Second Avenue SE to allow the Physician’s Clinic of Iowa to build a new facility have been proven right in many ways, Mr. Corbett said.

Mr. Corbett said PCI is exceeding its goals in its number of employees, honoring its commitments to pay off bonds for a parking ramp, and has expanded with the addition of the Albert G. and Helen Nassif Radiation Center.

“There has been an increase in private investment and overall improvements throughout the neighborhood in both medical and non-medical facilities,” Mr. Corbett said. He pointed to expansions at Mercy Medical Center and UnityPoint Health – St. Luke’s Hospital, the renovation of the former Kirkwood Learning Center on Fifth Avenue SE by Tanager Place, the relocation of The History Center to the former Turner Mortuary location, and a string of other investments.

Although leaders were criticized for focusing too much on downtown recovery after the flood, Mr. Corbett has a long string of projects and accomplishments to show for it. Among the largest are the $37 million CRST International headquarters under construction, and UFG’s plans to renovate the American Building and add a second tower.

There has also been an explosion in downtown housing options, bringing the city closer to its goal of having a 24-hour downtown.

Investing in the arts, cultural and entertainment district linking downtown to the Czech Village along Third Street was another right call, in Mr. Corbett’s view. He pointed to a growing list of investments along that corridor, including Geonetric’s $5.7 million headquarters, the construction of the mixed-use New Bohemia Station on the former Brosh Chapel site, the completion of the NewBo City Market, the renovation of the Sokol Gym to include a new Backpocket Brewery site, and the planned Iowa Brewing Company.

The “wrong call” Mr. Corbett described was last November’s unsuccessful ballot measure to increase the property tax levy by 27 cents to fund operating expenses and expand programming at the public library. Mr. Corbett said the loss of the measure had negative consequences for library service hours. In hindsight, he said the city might have asked for a lower levy, or included a sunset provision.

More than 530 turned out for the luncheon event, sponsored by the League of Women Voters.