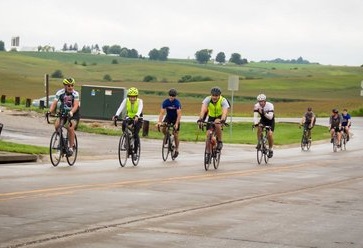 Courage Ride, a cycling fundraiser returning for its 12th year on Aug. 19, has to date raised more than $380,000 to advance local research of sarcoma, a rare form of cancer, and to support one of the largest sarcoma tissue banks in the Midwest.

The event is expected to attract more than 500 participants, including 11-year-old Courage Ride Patient Honoree Devin Martz. After being diagnosed with osteosarcoma in May 2016, Devin had rotationplasty surgery to remove his knee, which contained the cancerous tumor. Surgeons rotated Devin’s lower leg 180 degrees and connected it to his upper leg to allow his ankle to function as his knee. A University of Iowa biomedical engineering student is currently building a prosthetic device that will allow Devin to participate as a cyclist in this year’s fundraising event.

Returning riders will notice several changes from past years, including minor modification of a few routes, the addition of rest stops at Frytown and Keota, and a free event t-shirt for riders who register before Aug. 1. In addition, Courage Ride bike jerseys can be purchased at CourageRide.org.

The registration fee for adults is $75 through Aug. 11 and $85 after that date; a flat fee of $15 for youth, ages 13-17; and free for children 12 years and younger. Registration  includes a free breakfast and lunch, SAG support, and rest stops with entertainment.

Courage Ride was founded by Jackie and Tom Bailey in 2005 to honor their son, Seth, who died at the age of 25 after an eight-year battle with sarcoma. Since then, the event has continued to grow in number of participants and amount of dollars raised. All proceeds go to the University of Iowa Holden Comprehensive Cancer Center Sarcoma Research Program.