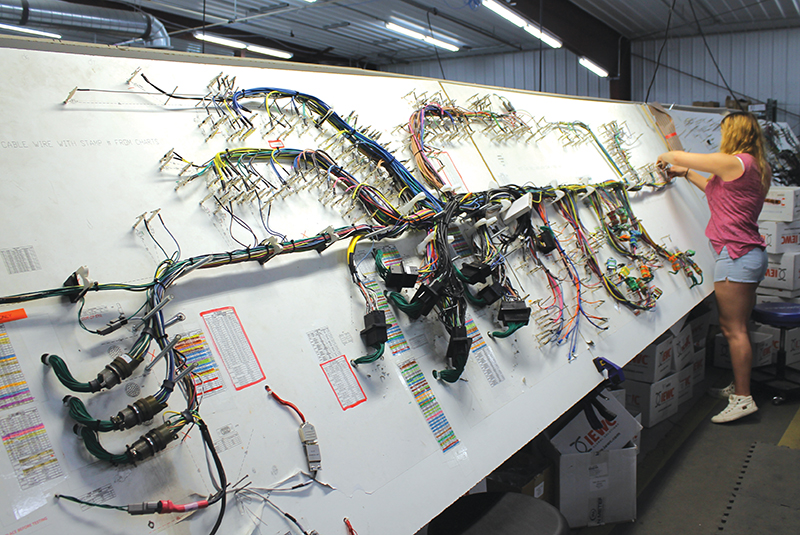 A wiring harness for a piece of agricultural equipment is laid out by Adreanna Clark, a large harness builder at Timberline Manufacturing in Marion. PHOTO DAVE DEWITTE

The increasingly consolidated and connected supply chain of manufacturers is generating growth in the Corridor, where at least three established suppliers have announced major facil­ity investments to serve growing demand.

Electrical systems supplier Timberline Manufacturing of Marion began work last week on a new $12 million facility, the largest expansion in its history, while World Class Industries of Hiawatha is ex­pected to begin work in August on a new $8 million facility. The Timberline expan­sion is expected to yield 56 new jobs over three years, while the WCI project will mean 28 new positions.

OEMs, or original equipment manu­facturers, typically rely on a host of up­stream suppliers from various tiers of the supply chain to produce the goods they sell. Tier 1 suppliers typically sell directly to the OEM, while Tier 2 suppliers sell to the Tier 1 suppliers.

Big manufacturers such as Deere & Co. are increasingly relying on Tier 1 suppliers to make subassemblies and more complex parts. Although there are many reasons for the shift, a key one is to improve asset utili­zation and reduce the amount of working capital needed to produce products.

“On the asset side, Deere today needs about one-third less working capital – items such as inventory – for each dollar of sales than was the case 20 or so years ago,” Deere Chairman and CEO Samuel Allen said in a Feb. 28 address to share­holders. “This frees up billions of dollars that can be used for other purposes such as capital projects or dividends.”

In other words, Mr. Allen said, “we can raise more money through a given level of sales.”

At WCI, CEO Brent Cobb says prod­uct intricacy is also driving the new reli­ance on suppliers. As more electronics and computerization increase complexity, he said the steps involved in adding that equipment would require longer assem­bly lines and even larger factories. One way his customers avoid that is by out­sourcing production of subassemblies to companies like WCI.

“They can focus on final assembly,” Mr. Cobb said. “They realize they can’t be a jack-of-all trades.”

Having the subassemblies delivered just in time for production reduces the amount of inventory OEMs need to have on hand, he added.

Timberline Manufacturing President Greg Erwin said most of his customers have used contract manufacturers for quite a few years, but he also sees some of the changing dynamics at play in the employ­ee-owned company he leads in Marion.

“Some of them [customers] are making more of these changes to contract manu­facturing,” Mr. Erwin said. “One of them is doubling capacity by outsourcing.”

As market conditions improve and worsen, Mr. Erwin said contracting with Timberline also helps his customers ramp up and down to meet demand, reducing the number of new workers they must hire and train when times are good, and the number they must lay off when busi­ness slows.

Timberline and WCI are just two exam­ples of the area’s growing industrial sup­plier base. As the CBJ went to press last week Van Meter Inc. announced plans to double the size of its distribution hub in southwest Cedar Rapids, which ships elec­trical supplies to 15 other Van Meter loca­tions and directly to customers in the area.

The plans include the acquisition of the 75,000-square-foot former Adi­das Licensed Sportswear building at 951 32nd Ave. SW and construction of a 44,000-square-foot addition to Van Me­ter’s existing distribution center. The proj­ect also calls for an enclosed runway to connect the two buildings, according to Central Distribution Operations Manager Kevin Foht and Wire Center Operations Manager Nate Etten.

The extra space provides a platform of growth for the company’s goal of dou­bling its size by 2025, Mr. Foht said.

Beyond growing sales volume, Mr. Foht and Mr. Etten said Van Meter will use the space to provide extra kitting and staging of supplies to make them easier and more efficient for customers to use or install.

Beyond its expansion plans for the dis­tribution center, Mr. Etten said Van Meter is adding a café, showers, a workout facil­ity and office space on the opposite side of the building, away from the expansion area, to make the facility a better place for employees to work.

Working with Ryan Companies US and OPN Architects, the employee-owned company expects to have the $4.7 million expansion complete by the end of Novem­ber. Plans for the former Adidas building are still being made.

About 21 jobs are expected to result from the expansion.