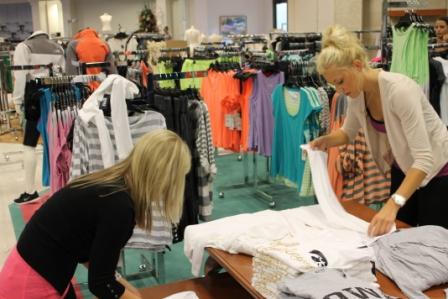 The store tied for the Best Boutique for Professional Women in this year’s Best of the Corridor survey.

Each department in the new store is incrementally larger than the previous store, said Amy Davis, Von Maur’s spokeswoman. Von Maur recently closed its location at Iowa City’s Sycamore Mall, to make the move to Coralville’s Iowa River Landing district. The move and Coralville’s incentives to the department store have been the subject of controversy and state legislation changes.

The new Coralville store has considerably more room than the Iowa City location. The shoe department is larger and will feature a new shoe-sale room. The children’s department is also expanded and includes an interactive tree display. The fitting rooms are roomier, as well.

“We also added a lot of fun components,” she said, noting the children’s department as an example.

Von Maur regulars will also notice aesthetic updates throughout the store, she said.

“We rarely redo a store or move it. We like to focus on opening new stores. When this opportunity arose, we were able to move down the street, continue to serve Iowa City and be part of a nice project,” Jim von Maur, president of the company, said in an interview with the Corridor Business Journal in early July.

Von Maur left Sycamore Mall in Iowa City with about 50,000 square feet of empty retail space. Sycamore management has not made any announcements on what will fill the space.

Sycamore Mall has recently teamed up with Shive-Hattery Architects & Engineers, a local architectural design firm, to develop plans that will guide the transformation of the center. The owners and the architectural firm will be working to evaluate trends throughout the United States, with a dedicated focus on the local community and use that information to help decide what to do with the open space.

“This (the Coralville store) is very unique for us to do something like this. In most cases, in a community that size we would just close the store,” Mr. von Maur said. “In today’s environment we probably wouldn’t have a store in Iowa City.”

The city of Coralville is providing more than $16 million in incentives to Von Maur to move, including money to pay for lease termination fees to Sycamore Mall.

The store will employ 85 people and increase that number to 100 around holiday time. Management and staff from the Iowa City store have transferred to Coralville, allowing the company to avoid having to hire a new staff.

“The Iowa River Landing continues to add excitement with every new business opening. The visibility from Interstate 80 in this location is unparalleled and offers easy access, as well,” Ellen Habel, Coralville assistant city administrator, stated in an email interview.

The Iowa River Landing District is a 180-acre area being developed at the southeast corner of Interstate 80 and First Avenue, where the Coralville Marriott is located. The $73-million University of Iowa Hospitals and Clinics’ new outpatient facility officially opened last year. Scratch Cupcakery, Jos. A. Bank, Charlotte’s Deli, Water Street Coffee and restaurant and bar 30hop are among the businesses that will open in IRL.

Before the redevelopment of the brownfield area, the Iowa River Landing was the site of the Coral Industrial Park, which included a million-gallon petroleum tank, adult dance and entertainment establishment, salvage yard and waste hauling business.  It was first identified as an area that could be put to better use in the 1980s, when a community planning and vision committee considered the view from Interstate 80, according to Ms. Habel. By 1988, the city council had identified the area as a priority for economic redevelopment.

“This is another exciting piece of the master plan. Over the last two years we’ve seen the opening of Homewood Suites, Backpocket Brewery and the University of Iowa Health Care facility,” Ms. Habel said.

Von Maur also has stores in Cedar Rapids, Cedar Falls, Davenport and West Des Moines. The company has opened several new stores in the past few years, including locations in Atlanta, Birmingham, Ala., New York and Oklahoma City.