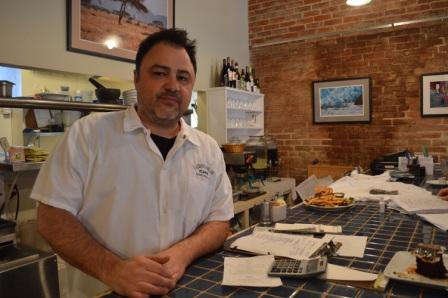 MOUNT VERNON – It won’t be the Lincoln Cafe, but a dollop of hope remains for fans of the popular Mount Vernon restaurant.

Although the Lincoln Cafe will close its doors after dinner on Dec. 21, owner Matt Steigerwald said he is in talks with at least three people about buying the business.

“My hope is to sell it quickly,” he said in an interview with the Corridor Business Journal. “I would love to have someone buy it in the next month.”

If that happens, Mr. Steigerwald predicted the cafe could reopen in the same location by February, but under a different name.

When he set up shop in 2001 on Mount Vernon’s First Street, the name was available for use, but since then, the Lincoln Cafe in Belle Plaine registered the name with the state of Iowa.

Under a new owner, the name would not be grandfathered in as it has been for the last 12 years.

Mr. Steigerwald said he has no idea what his next venture will be, but did not rule out the possibility of opening a restaurant in another city.

At age 47, Mr. Steigerwald said he couldn’t envision himself working “behind the stove” for another 15 years.

“I started thinking about my life,” he said of approaching age 50. “I felt I got done what I wanted to get done (at the cafe) but the life of this has arced.”

Mr. Steigerwald typically pours in 50-90 hours per week at the Lincoln Cafe and puts his mark on every special at the restaurant. With that schedule, plus one night per week at his Lincoln Wine Bar, he has no time to plan for the future, he said.

He opened the wine bar in 2007, just a few doors down from the cafe at 125 W. First St., and expanded it in 2012. The wood-fired pizza is simpler to make than the Great Lakes whitefish, roasted organic chicken and other complex dishes Mr. Steigerwald creates at the Lincoln Cafe.

“It’s more sustainable in terms of my time,” he said. “It’s not as time-consuming and mentally draining as (the cafe.)”

That comes as good news to Susan Hargus and Stan Crocker. The couple regularly eat lunch at the Lincoln Cafe, but also are fans of the Lincoln Wine Bar.

“It’s the best pizza I’ve ever had,” said Ms. Hargus, an artist who manages her husband’s lighting and set design business. “We were in Italy last year with one disappointing pizza experience after another. All we could talk about was the Lincoln Wine Bar.”

The two have lived in larger cities and were in Los Angeles before moving to Mount Vernon. The Lincoln Cafe is on par or above any restaurant, “really, anywhere,” Mr. Crocker said.

Artwork on the brick walls, a counter where regulars often sit and a chalkboard menu that indicates the day’s specials are among the unique features of the cafe, in addition to the food. Fresh fish shipped from the coast, local heirloom meats, local and specialty vegetables, house cured hams and sausages and house-made desserts are among the specialty items that have endeared the Lincoln Cafe to locals in Mount Vernon and far beyond.

Trisha Waltz has spent much of the past two weeks answering phone calls from customers hoping to make a reservation before the Lincoln Cafe closes. Unfortunately, those spots have all been taken.

Ms. Waltz, a server for six years at the cafe who works part time at the Lincoln Wine Bar, said she will miss the regular customers and her co-workers.

Because she lives in neighboring Lisbon, the short trek to Mount Vernon was a convenient commute and Ms. Waltz would like to still work locally, if possible, she said. Regardless of where she works, what she learned from her boss will carry with her.

“Matt opened my eyes to a ton of different foods and flavors,” she said.

At lunchtime, the basics are popular, including burgers and the famous French fries, along with Carolina barbecue pork, Ms. Waltz said. The fries are one area of interest for 32 customers who had “food is important” tattooed on various body parts, in exchange for free French fries “for life” from the Lincoln Cafe.

Mr. Steigerwald said he is making arrangements on an individual basis with those customers for food at the wine bar.

“I don’t expect anyone to be upset about it,” he said.

Many customers, however, are saddened that the Lincoln Cafe is closing its doors.

“A lot of people are weirdly upset about it,” Mr. Steigerwald said, citing hundreds of phone calls and messages he has received since announcing the closure earlier this month. “I can’t even respond to them all.”

Those that are the most heartening are people who congratulate him, he said, citing an example in the Mount Vernon Farmers Market newsletter. David Miller of Mount Vernon, a farmer who supplies fresh produce to the Lincoln Cafe, wrote of his years-long relationship with the restaurant.

Mr. Steigerwald continued what East Coast restaurants have been doing for years when he opened the cafe, by buying locally sourced fruits, vegetables and meats.

“Ten years ago, I had never heard the words etouffee or aioli before in my life. I had never eaten any of the items listed above. Now—how will I live without them?” Mr. Miller wrote. “And yet, all things change, and if my friend Matt wants to grow and face new challenges, and that means closing the doors to his restaurant for good, then I fully support him.”

Mr. Miller said he plans to be at the Lincoln Cafe on closing night with his wife, Mickey Miller, and is speculating about what the last menu might be. Among his favorites at the cafe are Moroccan foods, fish tacos, falafels, warm trout mousse and quail.

Mr. Steigerwald said he is leaning towards Mediterranean food or something he learned from southern chefs for the last meal.

He moved to Iowa from North Carolina for his wife’s job at Cornell College in Mount Vernon and previously worked at several restaurants in the southeastern United States.

“I’m not sure what’s going to happen on Saturday night,” he said. “I just want to serve something I’m happy with.”