An in-depth look at the dynamic and changing geopolitical relationship with China, especially in light of the Midwest’s important trading role.

The event will include: 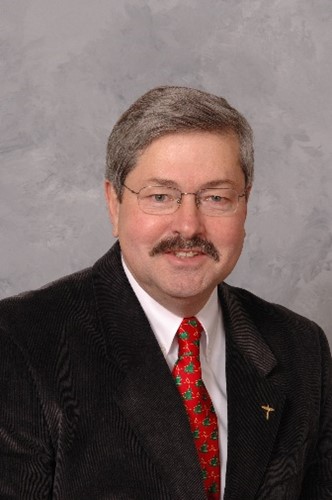 Terry E. Branstad is the former U.S. ambassador to China and the longest serving governor in American history.

A native of Leland, Iowa, Branstad was elected three times to the Iowa House of Representatives, as Iowa’s lieutenant governor in 1978, and as Iowa’s youngest governor in 1983. As the state’s chief executive and longest serving governor from 1983 to 1999, Governor Branstad weathered some of Iowa’s worst economic turmoil during the farm crisis of the 1980s, while helping lead the state’s resurgence to a booming economy in the 1990s. At the end of his tenure, Iowa enjoyed record employment, an unprecedented $900 million budget surplus, and the enactment of historic government overhauls that led to greater efficiencies in state government.

As a result of Governor Branstad’s hands-on, round-the-clock approach to economic development, Iowa’s unemployment rate went from 8.5 percent when he took office to a record low 2.5 percent when he left office in 1999. Following his four terms as governor, Branstad served as president of Des Moines University (DMU). During his 6-year tenure, he was able to grow the university into a world-class educational facility and send its graduates to offer health care in all 50 U.S. states while also becoming the first college in the U.S. to receive the Platinum Level of Recognition from the Wellness Council of America.

In October of 2009, sensing a need for change in the way state government operates and wanting to “lead Iowa’s comeback,” Branstad retired from DMU and was re-elected governor in 2010. During his second tenure as Iowa governor from 2010 to 2017, Governor Branstad signed historic investments in Iowa’s infrastructure into law, including Iowa’s roads and bridges, as well as the innovative Connect Every Acre Plan that expanded high-speed broadband internet to Iowa’s agriculture industry, schools, businesses and homes.

On Dec. 7, 2016, Governor Branstad announced that he had accepted the nomination from President-elect Donald Trump to serve as Ambassador of the United States to the People’s Republic of China. He was sworn in as ambassador on May 24, 2017. Ambassador Branstad served as U.S. Ambassador to China during one of the most challenging periods in recent U.S.-China history since the two countries re-established diplomatic relations in 1979.

Under his leadership during unprecedented crises, including the COVID-19 outbreak and the Chinese government’s closure of the U.S. Consulate in Chengdu, Ambassador Branstad led the largest drawdown of a single diplomatic mission in U.S. State Department history while evacuating over 1,300 staff members from China. He also created the Personal Protective Equipment for America Taskforce, which delivered 5,000 tons of urgently needed medical supplies to the U.S. to combat COVID-19. During his tenure, Ambassador Branstad’s two greatest achievements were the signing of the historic Phase One Trade Agreement between the U.S. and China in January of 2020 and successfully lobbying the Chinese government to stem the flow of fentanyl into America. The Phase One Trade deal secured $200 billion in Chinese commitments to purchase U.S. goods and services in the agriculture, manufacturing, energy, and other sectors, achieved stricter enforcement of Intellectual Property protections, and opened up China’s restrictive financial sector to U.S. banks and other financial services companies. Moreover, the Chinese government’s decision to schedule fentanyl as a controlled substance in May 2019 virtually stopped fentanyl shipments into the U.S., saving thousands of American lives.

Branstad received a B.A. from The University of Iowa and a J.D. from Drake University Law School. Of the many factors behind his continued success in politics, academia, and the nonprofit and corporate board worlds, Ambassador Branstad has always stuck to one personal mantra he often repeats: “Tough times never last, but tough people do.”

Interested in being more involved with the event as a sponsor? Contact Rhonda Roskos for more information.