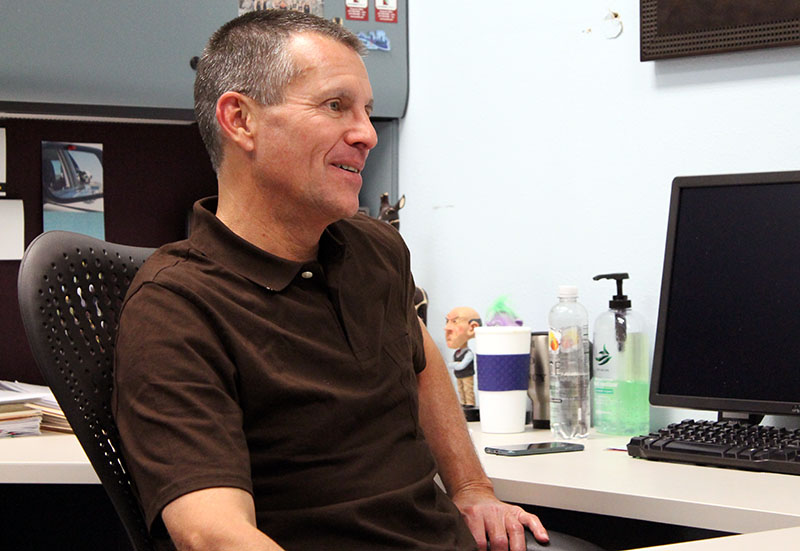 Thomas Cardella, shown in his Cedar Rapids office during a 2016 interview with the CBJ. PHOTO ADAM MOORE

Cedar Rapids-based Thomas L. Cardella & Associates (TLC) plans to add four new call centers and expand an Iowa call cen­ter in the next six months, marking the largest expansion in history for one of the Corridor’s fastest-growing companies.

Founder and President Tom Cardella said the expansions will add 800 employ­ees, most of them in the southwest, as the company increases capacity for about six new clients.

“All these locations are already sold out,” Mr. Cardella said, adding that the company has its eye on one other expan­sion location in El Paso, Texas.

The expansions currently planned are:

Mr. Cardella said the company gained new contracts partly by expanding its sales team late last year with some experienced talent, and partly because consolidation in the contact center industry has created opportunities to meet the needs of dissat­isfied customers.

The call center TLC will be opening in Las Cruces is in a former location of a Sitel call center that went dark after its opera­tions were moved offshore to the Philip­pines, Mr. Cardella said. TLC is already receiving interest in jobs from former Sitel employees, he said, and is refurbishing the call center to its standards.

Although much of the company’s past expansion has been in Iowa, Mr. Cardel­la said TLC has been forced to look else­where because the job market in Iowa has been so strong that the supply of person­nel is now constrained.

“It’s killing us – the unemployment rate has contracted so much,” Mr. Car­della said. TLC has been pleased with the supply of applicants and the work ethic of workers hired in New Mexico and Texas, he added.

While expanding its call center capac­ity, Mr. Cardella said TLC will be moving its Cedar Rapids headquarters to 3735 Queen Court SW from 4515 20th Ave. SW in April 2018 due to considerations relat­ed to a lease expiration.

An announcement of the southwestern United States call center location that has not been disclosed is expected in the next two weeks, he noted.

TLC has been honored multiple times in the CBJ’s annual Fastest Growing Com­panies recognition program, and was rec­ognized this spring as the “fastest of the fast,” with a 919 percent two-year growth rate in 2010, during an event celebrating the program’s first decade.

The company has been ranked as the ninth-largest integrated contact center op­erator in the United States, and Mr. Cardel­la said this spring that TLC’s revenues have grown sixfold since it won its first Fastest Growing Companies honor in 2010.

Beyond the possibility of more call center announcements this year, Mr. Car­della said TLC is on the lookout for other call center companies to acquire.