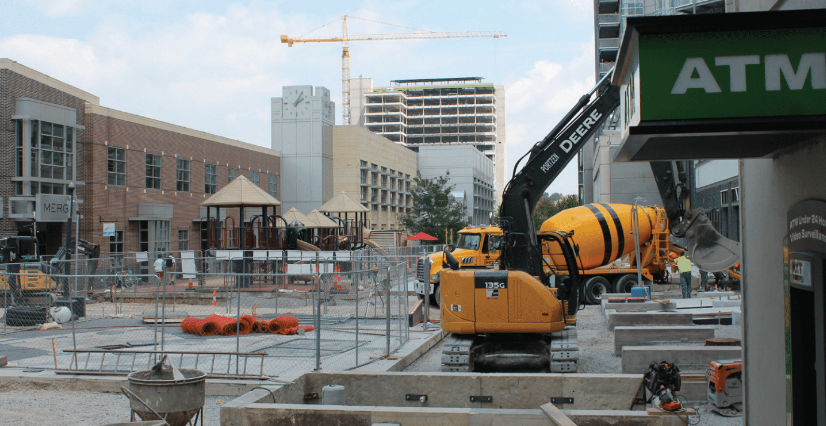 The iconic Ped Mall fountain and the playground near the Iowa City Public Library will remain as the surrounding area undergoes a transformation. PHOTO ALEX CARLON

Signs greeting visitors to the maze of fencing, torn-up streetscape and heavy equipment known as the Pedestrian Mall say it all: “WHEN WILL ALL THIS CONSTRUCTION END?!”

“It’s a hassle,” said Tina Yeats of Coralville, who was winding her way back to her car parked several blocks away after picking up provisions at the Bread Garden Market on South Linn Street last week. “I’m sure it’s going to look beautiful when it’s all finished, but for now it sure makes you think twice whether you really need to come down here.”

The iconic business district many consider the beating heart of downtown Iowa City is getting a shock of new energy after falling into disrepair over its 40-year lifespan. Shoppers like Ms. Yeats and operators of businesses lining Dubuque and College streets say they are excited about the revamp, which kicked off this spring and is scheduled for completion in fall 2019. But while they watch and wait for improvements that include a new stage and canopy on the north side of the recently opened Graduate Hotel, many can’t help but notice the pulse of the area has temporarily slowed, impacting sales, foot traffic and the area’s general vitality.

“It’s some short-term pain for a lot of long-term gain,” said Nancy Bird, executive director of the Iowa City Downtown District, of the project. “In the end, this is a project that adds to the vibrancy of the area. We’re going to survive to thrive.”

The Pedestrian Mall Improvements Project, part of the larger Downtown and Pedestrian Mall Streetscape Plan adopted in 2014, features a host of new amenities such as lighting, planting and other architectural accents that celebrate Iowa City’s “uniqueness and cultural footprint.”

“The Ped Mall needed to be updated, not just from a paving surface perspective, but from an underlying utilities perspective as well,” Mr. Sovers said. By the time the project is wrapped up, crews will have replaced the area’s deteriorating and, in some places, buckling brick surface, water mains, electrical systems, duct work and added a state-of-the-art fiberoptic telecom system. Other upgrades include new trash receptacles, light poles and benches, the installation of Big Belly Duo recycling and waste stations, and diversified planting throughout the area.

“The Ped Mall has been here since the 1970s, and it’s amazing how quickly stuff deteriorates when we have frost and harsh winters,” Mr. Sovers said, adding that the renewal project would also ensure the area is compliant with the Americans with Dis-abilities Act, increasing the universe of residents who can enjoy the Ped Mall.

The roughly $7.5 million project kicked off with Phase One in April. That phase, focused on Dubuque Street from College to Washington streets, is anticipated to be complete this fall. The second phase, located on College Street from Clinton to Linn streets, is expected to wrap in the fall of 2019.

“I think it’s important to do projects like this to keep everything vibrant and Under construction, keep folks supporting downtown businesses and all of the events taking place,” Mr. Sovers said. “We know it’s kind of stressful for businesses, but we’re doing our best to keep it moving along and to get her done quickly.”

In addition to prominent directional signage to help shoppers and visitors find their favorite shops and businesses, Mr. Sovers said the city of Iowa City has committed to outreach to impacted businesses, including weekly meetings every Friday.

“To be honest, they have not been well-attended,” he said. “Hopefully, that means we’re keeping everyone happy, but I think the reality is that sales are down and revenue is down a little. At the same time, business owners understand the importance of the project and what it means.”

Terry Dickens, owner of Herteen and Stocker Jewelers on South Dubuque Street, said his store has suffered a loss in foot traffic and about a 20 percent drop in sales. That isn’t as bad as the 2016 Washington Street construction project in which the store saw losses of 40 percent, “but it is impacting us,” he said. “They are closing streets at an alarming rate downtown.”

Mr. Dickens, who served on the Iowa City Council for eight years from 2010-2018, said he realized the upgrades needed to be done, but called the timing “very tough,” especially with the University of Iowa installing new windows, doors and some brickwork on the shop’s Jefferson Building location at the same time.

“It’s kind of a double whammy,” he said.

It’s a sentiment shared by Cassidy Bell, manager of the neighboring 10,000 Villages shop, which is also getting a university-paid facelift at the same time traffic is squeezed into narrow, uninviting lanes as part of the Ped Mall revamp.

“I think it probably is impacting [sales] a bit,” said Ms. Bell, adding that, on the other hand, there has been a surprising upside to the squeeze outside. “It gets everybody pushed right up next to all our windows and kind of draws people in.”

Ms. Bell said she is looking forward to completion of work along Dubuque Street in late fall, anticipating an influx of curious shoppers that will push the store’s numbers back up.

Ms. Bird said that if the experience of Washington Street restaurateurs and merchants is any indication, hopes for a rebound are likely to bear fruit, with ICDD data indicating an uptick in spending in the area following the completion of improvements.

“With construction comes pain points for our business community, for sure, but it was time to pull off the band-aid,” she said. “There is some temporary pain, but it will be worth it in the end, and we’re doing our best to get through it as quickly as possible.”

Ms. Bird said improving the Ped Mall and surrounding downtown streets was essential, with electricals beginning to short out, trees dying of Dutch elm disease and brick walkways originally laid directly onto old paved roads literally buckling from be-ow. One of the most exciting opportunities, she said, was the new fiber optic network, “which sets up our business community for exciting things well into the future.”

The underlying philosophy of the re-vamp is “do no harm,” she said. “The Ped Mall is a wonderful place. It’s kind of the city’s living room, so it’s important that all the elements people love and expect, like the tree canopy, remain strong.”

Ms. Bird said she preferred to refer to the Ped Mall changes as “edits,” stressing the area would retain the same bones. Alterations will be aimed at promoting natural movement, creating intimate places to sit and chat, designing more linear path-ways from place to place and realigning placement of trees to maximize sight lines.

The stage, she said, will be one of the most important new elements. “Like any great space, the key criteria is places to sit,” she said. “Before people were sitting on planters, on trash cans, all over the place. We realized, there’s certainly a better way to do it, so we created a small amphitheater that reflects how people use the space in a more natural way.”

The Ped Mall’s popular fountain will remain in place, with the stage and seating area taking form around it.“We want to keep [the Ped Mall] in good health,” Ms. Bird said. “We’re over-due for it, and when we’re on the other side of it, it’s going to be amazing.”