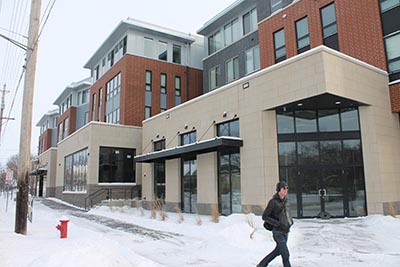 An unintended consequence of Iowa’s massive 2013 property tax reform law could create an uneven playing field in the years ahead for owners of commercial buildings with use divided between commercial and residential.

It’s a concern to local governments, because it will lower property tax collections and the state will not “backfill” revenue losses as it has with the property tax rollback for property classified as commercial.

For owners of commercial buildings that contain both residential and commercial space, there’s both opportunity and potentially significant risk. County and city assessors are currently reclassifying those buildings into either the “multiresidential” category that will be taxed at only 55.7 percent of the assessed value, or into the commercial property that will be taxed at 90 percent of the assessed value.

Veteran commercial real estate appraiser Casey Cook of Cook Appraisal in Iowa City said he was dumbfounded to learn that the property tax reform law had created a “huge, huge loophole,” in allowing some commercial buildings to be reclassified as multiresidential.

“It was an unintended consequence of the (property tax reform) law,” Mr. Cook said, adding that he thinks some legislators were surprised to find out that assessors were interpreting the law to reclassify some commercial buildings that way.

Mr. Cook thinks Iowa City, where he lives and works, will be vulnerable to a significant loss of property tax revenue because a significant amount of split-use commercial property has been developed under city policies that encourage including ground-floor retail in multifamily residential projects in the downtown area.

Many commercial properties are leased on a triple-net basis. Tenants with a triple-net lease pay their own taxes, insurance and common-area maintenance costs separate from their rent. Landlords with property classified as multiresidential will be able to charge significantly higher rents than landlords with property classified as commercial, because their tenants won’t have to pay the higher tax rates of a commercial building, and will therefore be able to allocate more of their space budget to lease payments.

Mr. Cook said the reclassification will also affect the appraisal value of buildings, based on whether they are commercial or multiresidential.

“As taxes go down, typically property values go up,” Mr. Cook said. “They (lower property taxes) are not going to be passed on to the tenants.”

The owners of dual-classified buildings that are reclassified as commercial may soon begin wondering why they got stuck in the higher-taxed category. It will depend on how they were assessed, and that will depend on the method their assessor uses, as there is no single method required across the state.

Linn County Assessor Julie Kester said Linn County uses a market-value approach. It will attempt to determine whether the residential space accounts for the majority of the building’s market value, or if the commercial space dominates its market value.

“If it goes to sell, are they buying it more on the commercial level or the residential level?” Ms. Kester explained.

The full phase-in of the multiresidential exemption will take 10 years. Even so, some forward-looking property owners have already asked Mr. Greazel what they can do to improve their chances of having their property classified as multiresidential.

“I tell them to lower the rents (on their commercial space),” Mr. Greazel said. “So far, none of them have liked that.”

Mr. Cook said both appraisal methods will introduce a great deal of subjectivity to the decision about how to classify the property. He said the least subjective method might be to categorize the building by which use – residential or commercial – occupied the most square footage.

Ms. Kester said assessors have heard certain legislators say that it was never intended for assessors to make the call over what classification a building should be placed in, and that a legislative fix is in order. But until an amendment comes along – if ever – assessors will have to make the difficult call.

Mr. Greazel expects the issue, if unaddressed, to guide future development decisions. A developer building a building with ground-floor commercial would have great incentive to build three levels of apartments up above it rather than two levels, for instance, if it would throw the assessment classification from commercial to multiresidential tax category.

Another property tax reform provision is also helping, but not universally, because property owners have to apply for it.

Commercial property owners in most cases are now able to obtain a business tax exemption if they apply for it under terms of the 2013 property tax reform bill.

Even so, Mr. Greazel said quite a few parcels eligible for the business tax exemption, perhaps close to half, have not been enrolled for it in Johnson County.

The enrollment rate is running higher in Linn County. Ms. Kester said it’s believed that as many as 94 percent of commercial property owners who qualify have applied for the credit.

Gov. Terry Branstad signed the tax reform bill into law at Hawkeye Redi-Mix in Hiawatha in June 2013. Depicted as the largest tax cut in the state’s history, it is estimated to reduce tax bills for property owners by $4.4 billion over its first 10 years of implementation.