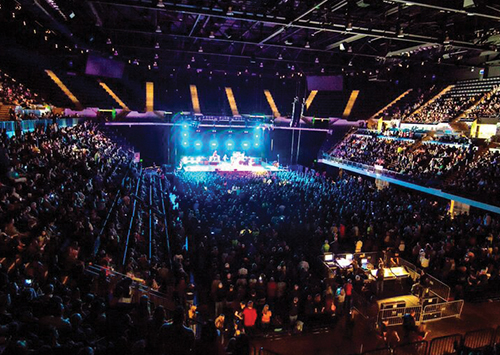 The appeal of the expanded U.S. Cellular Center in Cedar Rapids won it a big round of applause from Corridor audiences, who voted it Best Event Venue for 2015.

It’s been more than two years since the arena reopened after a lengthy, $144-million city renovation that included the DoubleTree by Hilton Cedar Rapids Convention Complex. The expansion has helped VenuWorks, which manages the city-owned facility, to book such big acts as Lady Antebellum, Florida Georgia Line and Five Finger Death Punch.

“One hundred and seventy-five thousand people came through our doors in 2014, and we’ve already had 100,000 people in the first six months of 2015,” Sharon Cummins, executive director of VenuWorks of Cedar Rapids, said. “It tells us that we have identified what our community is looking for in events and bringing it to the market so that people want to come to the building.”

Ms. Cummins’ long personal connection with the U.S. Cellular Center has given her insight into why the arena needed a new lease on life. She managed it in the early days, when a $15 ticket brought admission to the country’s top touring acts, and was brought back by VenuWorks to oversee operations after the renovation.

Over the years, Ms. Cummins said newer and larger arenas opened up in the Iowa market. Stage productions got bigger and bigger, with massive video screens and other stage props that took up a lot of space and rigging.

“It sort of changed the competition,” Ms. Cummins said. “As the building aged and the shows got bigger and bigger, it was harder for us to meet the financial demands of the show. For the artist, it was about what is the gross potential of tickets in the market and can we physically host that event.”

Seating capacity expanded in the remodeled U.S. Cellular Center by about 1,500, to 9,000 for general admission events.

The growth in ticket sales since the reopening points to the fact that event-goers are paying not only to see an act, but for a total entertainment experience, according to Ms. Cummins. From the moment fans walk into the grand lobby, she said the U.S. Cellular Center now has the “wow factor” that draws in the fans. There’s also a comfort factor, with an additional parking garage attached to the center, new restrooms and new concessions.

City-funded makeovers at the adjacent DoubleTree by Hilton Cedar Rapids Hotel and Convention Center have also made it easier for VenuWorks to sell V.I.P. packages to concert-goers. The packages include things like overnight stays and receptions that allow them to meet the performer.

The entire DoubleTree by Hilton Cedar Rapids Convention Complex was last year’s winner in the Best Event Venue category, making the U.S. Cellular Center’s 2015 win something of a repeat.

Beyond attracting more touring acts, the expansion of the U.S. Cellular Center has made it possible to expand sports event bookings.

The Cedar Rapids Titans’ arena league football team announced recently that it will bring an expansion franchise of the Major Arena Soccer League to the U.S. Cellular Center. Neither of the pro league events would have fit in the old U.S. Cellular Center, Ms. Cummins said.

A contract to host the Iowa high school girls’ volleyball tournament was also recently extended to 2021.