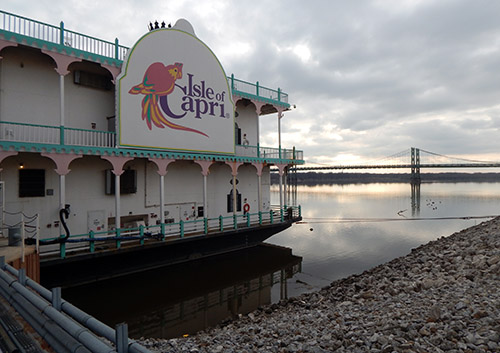 The Isle of Capri, docked in Bettendorf, will no longer be needed when its new land-based gaming floor opens this summer. That will reduce the number of water-based casinos in the state to three out of 19.

Iowa, the state where riverboat gambling got its start in the Midwest 25 years ago, will be down to just three water-based, state-regulated casinos by summer. That’s fine with casino operator Dan Kehl, whose parents Bob and Ruth Kehl originally opposed gambling, but later obtained the nation’s first riverboat gaming license.

“Nobody wanted to be stuck on a riverboat until the cruise ended,” said Mr. Kehl. “The shift was necessary to meet customers’ expectations.”

Mr. Kehl is CEO of Riverside and Grand Falls casinos and golf resorts – both built after the Iowa Legislature scrapped requirements for cruising casinos – and of Rhythm City Casino, which will leave the Davenport riverfront June 16 for a new $110 million casino-hotel-events center on a 40-acre tract at the interchange of interstates 80 and 74.

Meanwhile, the Ameristar in Council Bluffs, the Lady Luck in Marquette and the Lakeside in Osceola remain on water.

“I imagine those other three will remain as riverboats for a while, but it’s not inconceivable that they could become land-based facilities as well,” said Wes Ehrecke, executive director of the Iowa Gaming Association. He agrees with Mr. Kehl that changes in gaming laws and facilities have been necessary and customer-driven.

“You have to give customers what they want in an entertainment experience,” he said. “Casinos had to migrate to become much more than the gaming floor.”

Hotels, restaurants, meeting spaces, concert venues, golf courses, bowling alleys and comedy clubs all grew up around casinos – entertainment options that are “impossible to do on boats,” Mr. Ehrecke said.

More freedom for casinos and broader options for consumers means more jobs and a bigger economic impact, Mr. Kehl said. Rhythm City’s employment will go from 250 to more than 600 when the new facility opens, while gaming revenue is expected to grow from the upper $40 million range to more than $70 million per year.

Some people may have forgotten, but it was the farm crisis of the late 1980s that made gambling attractive in the Midwest, he recalled. The ripple effects of thousands of farm foreclosures hit river towns hard. They watched as their agricultural machinery, seed and fertilizer plants shut down, followed by stores and banks. Using rivers to attract tourists seemed like a good idea.

In 1990, Iowa granted its first gaming license to the Kehls, who ran a Dubuque-based dinner cruise business, and other states quickly followed, all harkening to the “romantic/historical mystique of riverboat gambling as opposed to being just a casino,” reported the Associated Press at the time. The standard requirement was that riverboats must “be either modeled after a nineteenth century riverboat or be of a cruise ship design.”

Also standard were requirements that boats cruise for two-hour sessions, with maximum bets of $5 and $200 loss limits, but it wasn’t long until permanently docked casino boats pulled up their gangplanks two hours at a time and dropped them when the “cruises” were over. Competitive pressures among states soon resulted in relaxed regulations. “Boats in moats” and casinos on bladders met legal requirements that were eventually scrapped entirely.

“It was silly to make them have water under the gaming floor,” said Mr. Kehl, who praised the Iowa Legislature’s efforts to keep the industry competitive.

The industry continues to evolve, he said, and his company works hard to keep up. A golf course recently added at Grand Falls has resulted in an uptick in corporate business. At Riverside, south of Iowa City, the design process is underway for a total remodel of the 10-year-old facility. Other changes are coming as consumers turn to skill-based games and fantasy sports.

One change Mr. Kehl doesn’t foresee is the addition of any more casinos in the state.

“The Iowa Gaming Commission has done a study. They don’t see opportunities for casino growth without impacting the industry. The market is pretty saturated,” he said.

Mr. Kehl said his late father would be happy with the changes in the industry, though the family misses the dinner boat days when they all worked side-by-side. The growth of their companies makes up for that, he said. The new Rhythm City facility will push total employment to 1,800.

Meanwhile, he doesn’t have to worry about what to do with a used riverboat casino. A company in Memphis has bought Rhythm City’s Treble Clef II and will use it as a banquet facility.