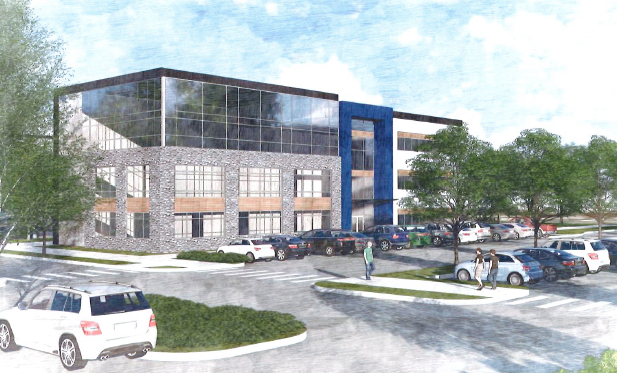 A rendering of a potential office building at the 20-acre mixed-use development proposed by 13 and 151 LLC for the eastern edge of Marion. CREDIT SHIVE-HATTERY

A former driving range on the eastern edge of Marion could become a striking gateway to the city area under a new development proposal.

A three-person development group named 13 and 151 LLC has filed plans for a $50 million, 20-acre mixed-use project at the corner of Highways 13 and 151, which was previously home to Village Green Driving Range but has sat unused for the past three years.

The proposed project would include 13 lots in all, including office and commercial buildings, multi-family housing, a bank, an 83-room hotel and an event center capable of hosting up to 500 people.

Developer Brian Ridge declined to identify the hotel flag or a possible operator, but did say that his group has already completed negotiations with an “upper scale” hotel brand.

“It’s priced,” Mr. Ridge said. “We’re basically waiting on the city to get through this process.

The project would be built in two phases, Mr. Ridge told Marion’s Planning and Zoning Commission on Jan. 10, with the western half of the project getting underway this spring, assuming site plans are approved by the full city council.

If the schedule holds, Mr. Ridge said three of the five commercial buildings in the western phase could open this year, and the hotel could be open by August 2018. The entire project could be completed as soon as 2020.

“Part of the reason we have to phase it is, we only have so much time and ability to do any project,” Mr. Ridge said of Garling Construction, his employer and the general contractor on the project. “There are things that could happen or could not happen, but we feel pretty good about it.”

The goal of the project is to create a high-end destination on the edge of the city. Preliminary design guidelines and renderings created by design firm Shive-Hattery showed modern, clean-lined buildings with a variety of mixed materials, including brick, glass, metal and wood.

“They’ve got a beautiful toy box of items they’ve put into this plan here,” Planning and Zoning Commission Member Phill Seidl said as the group reviewed design standards for the project on Jan. 10. “I’m in favor of this kind of thing.”

While commission members discussed the potential mix of building types and noted it may remain fluid until further details are available, Mr. Ridge acknowledged after the meeting that “there’s pretty much a mix that’s been set into motion,” indicating that much of the plan will likely remain intact.

Developers sought and received approval for a rezoning of the land from C-3 General Commercial to a Planned Special Development, which would restrict the types of businesses allowed in the development, but also allow developers variances on parking and signage regulations, and the ability to include residential buildings. Land at each corner of the 13-151 intersection is zoned for General Commercial, with a Walmart, McDonald’s and a Culvers restaurant located across the road.

City officials said the rezoning to a planned special development will slow the project, as it will require additional approvals and public hearings for each building, but it will also provide the city more ability to control the overall look and evolution of the project.

“It is zoned C-3 today, and if someone wanted to build a gas station there tomorrow, they could do it – they could pull a building permit tomorrow and build,” said Assistant Planning and Development Director Dave Hockett. “There’s no control, no design standards, no public comment period.”

Nick Glew, president of the Marion Economic Devlopment Corporation, spoke in favor of the rezoning, noting that many in the community expected the location to be the site of a big-box store. The decision to rezone would be a positive one for the neighborhood and the community as a whole, he said.

“At the end of the day, it’s guaranteeing that … we’re elevating the quality of what’s going to happen on these sites, as opposed to just a C-3 [zoning] today,” Mr. Glew said.

Mr. Ridge, a project manager with Garling Construction, declined to name his partners in the LLC, but said the company was organized after seeing “a need and an opportunity.” It purchased the land from Water Rock LLC for $1.5 million in July 2015, according to county records.

The group has not made a formal request for incentives from the city, according to Mr. Ridge, who added that they are “approaching that a little differently than everybody else,” by waiting to see what their exact financial needs will be.

“We went through the process of identifying customers, customer needs, design costs and that type of stuff,” he said. “As [the project] goes through the council, it will start showing up.”

Site plans are expected to begin appearing before the full council in early spring, at which point Mr. Ridge expects enthusiasm for the project to grow.

“It’s hard to believe that that corner has sat vacant for so long,” he said. “I think people will be excited when they see what we’ll actually be bringing in once we can announce those.”