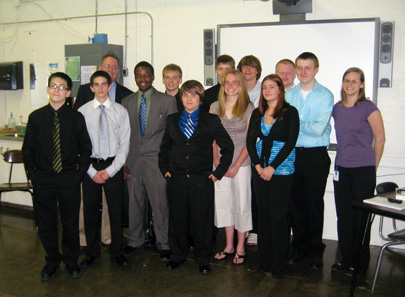 Do it Design, out of Cedar Rapids, sold aluminum water bottles, coffee mugs, iPod covers and key chains. It took requests and was able to personalize the items based on customer requests. It used special laser equipment to apply the personalized logos onto the products.

The 11 employees started the business in November and struggled though many of the same challenges that other new company’s experience. These aren’t typical businesspeople, however. They are a group of students at Cedar Rapids Jefferson High School finishing up their manufacturing enterprises course. As part of the class, the students started the company from scratch, sold shares to teachers, family members and neighbors and liquidated the company at the end of the course.

Through the Junior Achievement program, the students were given assistance and a volunteer mentor who encouraged them through the ups and downs of business. The group’s mentor was Maurie Cashman, president of Aspen Grove Investments in Cedar Rapids. The money needed to start up the company, however, the students had to find.

Listening to other’s opinions, staying determined and focused on the goal and not quitting were among the skills the students learned.

“They enjoyed it, but at times it was very frustrating. It threw challenges at them they weren’t used to, but they stuck with it,” she said.

“Not only did they learn business skills, but they learned life skills they can use later on in life,” Ms. Cox said. The students especially learned how to work as a team, she added.

The company had a president and a department head with one employee for public relations, marketing, production, human resources and finance.

The students sold stock, chose the products to manufacture, found sources and purchased the raw materials, manufactured the product, marketed and sold those products, and handled the accounting for the company.

The company sold 88 shares of stock at $2 each and turned it into a profit of nearly $1,300. For their $2 investment, the shareholders got $5 back at the final meeting last month.

They sold approximately 120 water bottles, 100 iPod cases, and 130 key chains, said Lebon Mulangaliro, president of the company and a senior at Jefferson. Depending on the commission, at the end of the class each student earned between $80 and $120.

The class consisted of one senior, three juniors and seven freshmen, nine male and two female.

“When we first started in December, we had no money. We started selling stocks; and we got 58 stockholders and sold 77 stocks,” Mr. Mulangaliro said.

Through the process, Mr. Mulangaliro said he learned leadership, business and management skills.

“Time management was really important. I really didn’t know it was going to be that hectic,” he said.

“When I go into schools to talk to students, all we hear about are the financial insecurities happening in our country,” Ms. Cox said. “[The goal is] to really prepare the students the best we can so that they can be productive citizens.”

The students marketed their products by putting posters up throughout the school and offering deals on different days, said Kailey Drake, the company’s public relations director and a junior at Jefferson.

“We had a down spot during the year. We were not getting along, there was a lot of arguing,” Ms. Drake said. Their mentor, Mr. Cashman, came in and helped the students through those challenges.

“I want to be an engineer, but I was thinking about starting my own business because it was a lot of fun,” Ms. Drake said. “It was a challenge, a good challenge to go through, and you learn a lot from it.”

The class will be offered at Jefferson again, said Jennie Kies, who taught the course. It was considered a technology education class.

While one person may be financially motivated, another might be very creative.

“We want to teach students that they might not have expertise in one area, but they can support the group in another area,” Ms. Kies said. “All of those things are necessary for a company to have success in the business world.”

Junior Achievement of Eastern Iowa offers various programs aimed at teaching young people how to succeed in a global economy. It is focused on educating students about workforce readiness, entrepreneurship and financial literacy through experiential, hands-on programs.

“Our purpose is to inspire and prepare young people to succeed in a global economy”, Ms. Cox said.