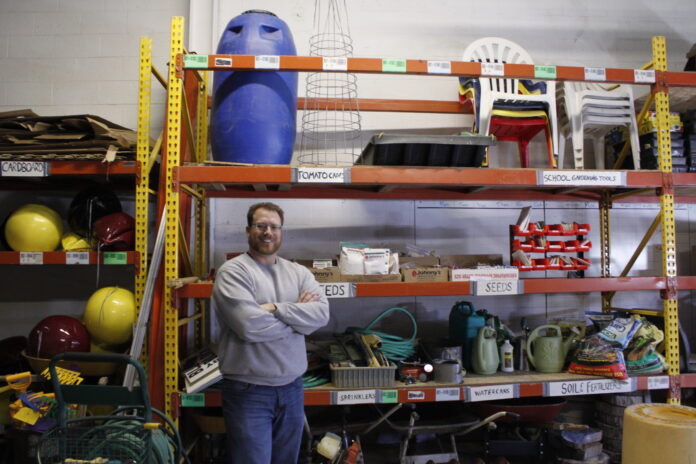 Mr. Meyer is the director of Cultivate Hope, a project organized by community  development non-profit Matthew 25 Ministry Hub. Cultivate Hope is preparing for its second year of maintaining an urban farm near G Avenue NW in Cedar Rapids, as well as three smaller farms at community schools.

Previously, he worked with Block by Block, a partnership between Matthew 25, Four Oaks’ Affordable Housing Network and the Iowa Annual Conference of the United Methodist Church that restores flood-damaged homes.

Although Block By Block has rehabilitated hundreds of homes, some blocks did not seem likely for redevelopment because of their position in the 100-year flood plain. So, Mr. Meyer created a vision for his other passion, agriculture.

“We just drove around and found a spot that looked like it’d been forgotten,” he said.

In 2012, that spot was developed into an urban farm with the help of about 450 volunteers. The five-block area surrounding the farm includes Diamond V Mills, Rumors Bar & Grill and a vacant warehouse previously owned by the Cedar Rapids Community  School District. The area is split diagonally by a railroad track.

“That’s a location, because of its proximity to some other more industrial uses and its partial location within the 100-year flood plain, that would have been challenging to  redevelop,” said Paula Mitchell, the grants and program manager for the city of Cedar Rapids, who worked with Matthew 25 to make the farm a reality. “It’s good to see it put back into use in a way that benefits the community.”

The city’s land-use policies previously did not allow for urban agriculture. After presenting a master plan for the neighborhood to city council in the spring of 2011, Matthew 25 was  able to encourage the city to change the ordinance. Now anyone in the city can start an urban farm with a permit and yearly inspection.

The farm grows a wide variety of vegetables, including lettuce, spinach, zucchini, peppers and tomatoes. With the exception of sweet corn, Mr. Meyer said the farm produces much of what is typically found at farmer’s market stands.

“It’s what I like to call the nutrient-rich food, not the calorie-rich food,” he said.

The vegetables are sold through a Community Supported Agriculture (CSA) model, which has gained popularity around the country as a way to buy local produce directly from farmers. In a CSA, members pay up front for a season’s worth of produce and receive a box of fresh, seasonal vegetables every week.

Mr. Meyer hopes to be able to support 45 shares in 2013. People with proof of residence in the Time Check or Taylor neighborhoods can buy shares for half-price. The money will be used to improve the Matthew 25 neighborhood.

Ideally, the first CSA shares would be distributed in the second week of June, and the program would continue for 20 weeks. However, with a blanket of snow still on the ground in mid-March, having vegetables ready in time might be a challenge this year, he said. All the seeds need to be planted early in April to have fresh vegetables to offer in June.

Cultivate Hope also manages three quarter-acre educational gardens at local schools. Students can work in the gardens throughout the warm months and visit the main farm a few times per year to learn about agriculture and neighborhood issues, such as food insecurity.

Mr. Meyer hopes to find other land in Cedar Rapids to use in the same way and provide fresh vegetables to more of the city.

“Personally, it drives me nuts seeing land sitting around not used,” he said. “I find a row of vegetables much more appealing than grass or shrubs.”

Matthew 25 and other community partners hope to further develop the five-block area around the farm into an eco-friendly neighborhood, with sustainable houses built by Block by Block and potentially multi-family housing and a community gathering space.

The old public schools warehouse, a brick building on the southwest corner of Ellis Boulevard NW and G Avenue NW, has been proposed for redevelopment into loft-style apartments. The developer, Neighborhood Development Corp., applied for state assistance through the multi-family new construction program and expects to hear back in May, Ms. Mitchell said.

Meanwhile, Matthew 25 plans to build eco-friendly, single-family homes around the neighborhood, with the urban farm serving as a buffer between the homes and the railroad tracks.

The resulting neighborhood would be known as Ellis Urban Village.

The urban nature of the farm and proposed developments, minutes away from downtown Cedar Rapids, is its defining feature, Mr. Meyer said.

“Usually eco-villages are out in the country,” he said. “They end up not being so eco-friendly because you have to drive out there.”