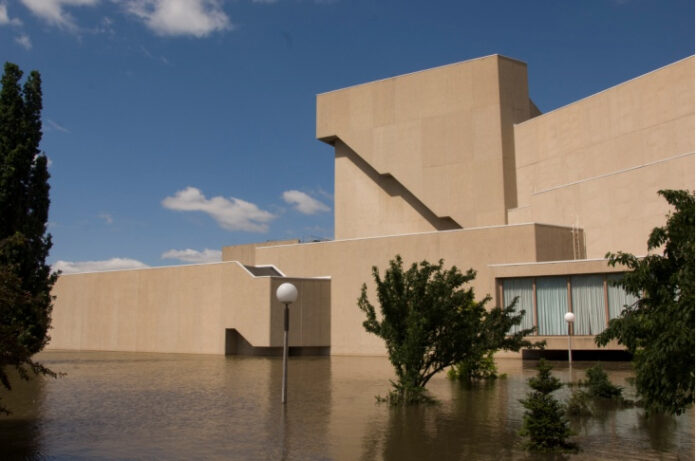 Hancher effort to begin in earnest in 2013

Everything in good time.

Three years have passed since the historic flooding that deluged much of the Corridor. Heavy rains following several unseasonably wet months led to heavy flooding throughout Iowa, Illinois, Indiana, Minnesota, Missouri, Nebraska and Wisconsin. The Midwest flood is estimated to have caused more than $15 billion in damage with 24 deaths, according to the National Climatic Data Center. It is often referred to as the nation’s fourth worst natural disaster.

While the flood impaired many University of Iowa buildings, causing more than $743 million in damages, it crippled the school’s arts campus. Studio arts students, for example, continue to attend classes in a renovated hardware store on Highway 1.

Although it has been three years of recovery for the university, it will be another two before a public campaign to raise money for the arts campus begins. While that might seem like a long time, the timing is right, said Lynette Marshall, president and CEO of the UI Foundation, the 501(c)(3) tax-exempt organization that solicits tax-deductible private contributions for the UI.

Fundraising efforts are now referred to as comprehensive campaigns instead of capital campaigns, because money is raised for more than buildings, but programming as well.

The quiet phase is when the UI’s most generous donors are contacted about donating to the fund. Once the largest gifts are secured, the campaign is then marketed heavily to the public.

“It’s like a jar of rocks, you put the largest rocks in first,” Ms. Marshall said. “Then, usually at the end of a campaign, we reach out to everyone else who might be interested.”

Each UI college completed a survey of its key priorities and its facility, faculty and programming needs. The survey results are used as a tool to determine how to distribute donations and gifts directed to individual departments, as well as general gifts to the university.

A combination of Federal Emergency Management Agency (FEMA), state, insurance, UI and philanthropy funds will be used to rebuild the arts campus. The foundation will be managing a $30 million campaign to help pay for the construction of a new Hancher Auditorium, music school and studio arts building.

“We have a sense now, after the end-of-June FEMA meeting, where FEMA said how much money they’re willing to put on the table, so now we know what FEMA will put forward,” she said. “Now we know how much state bonding authority we have, we know what the insurance proceeds are and we know what that delta is then, for philanthropy to be able to complete those projects. It’s going to stretch us and this community to raise that much money for arts facilities.”

Now that design work for Hancher and other buildings is underway in earnest, it will be easier for the foundation to approach donors and give them an idea of what the buildings will look like.

When a large new building is built on campus, fundraisers usually seek out large contributors, donors who are willing to make a gift substantial enough to put their name on the facility or department itself, as it did with the Henry B. Tippie College of Business or the Carver College of Medicine. Hancher Auditorium, however, will likely retain its name.

Typically, when faced with a unique challenge, businesses can look to industry peers for advice. But with the 2008 floods, the UI Foundation was hard-pressed to find another university that experienced a similar disaster.

“We’ve looked for them,” Ms. Marshall said. “We’ve reached out to colleagues across the country and we’ve even reached out to consultants who help with arts fundraising. But we have experienced a unique disaster.”

The flood will in turn create an opportunity for the arts campus unheard of throughout the country in this economy.

“I’m excited to see this campus in five short years,” she said. “As a result of the fourth worst natural disaster in the history of our nation, we have the opportunity to have a completely reconceived and reenvisioned set of facilities that will support music and arts education well through the 21st century. And in this era of declining support for higher education, declining support for the arts, what a beautiful gift that is to the state ofIowaand to higher education. No one else is going to have been able to afford to do what we’ve been forced to do.”

The foundation expects strong support from arts alumni. About 13 percent to 15 percent of UI alumni contribute to the school, while 50 percent of arts alumni give back.

“Our belief is, they do that because of the very intimate faculty experiences that they had as a result of being in the studio teaching model of working directly with faculty members over a period of four years,” she said. “So we hope there will be alumni who want to support specific studios.”

This summer and fall, the foundation will conduct a planning study, including about 150 one-on-one interviews with donors, volunteers and advocates who will help with the arts campus comprehensive campaign. The results will come back in the winter and presentations on the study will be made in the spring to the foundation’s board.

Once the presentations are complete, the foundation will prepare for launching the public campaign in 2013.

Meanwhile, the UI Foundation is raising $500 million for the UI’s medical campus to promote advances in research. The campaign will run through mid-2013. Major campaigns are also ongoing for the College of Public Health’s new building and programming, law school programming and facility updates, as well as the dentistry school’s building renovation and expansion.

The museum of art is seeking support to exhibit work in temporary locations after being displaced by the flood.

Most university major comprehensive campaigns last for about a decade. Donors who make significant contributions are not usually overwhelmed with UI requests for large gifts for projects. Many of them contribute smaller amounts on an annual basis and plan ahead to make larger donations once every several years.

Those interested in donating to any of the comprehensive campaigns do not need to wait until they are solicited by direct mail, telemarketing or other marketing efforts. Donations can be made any time at the foundation’s web site.

The most recent fiscal year, ending June 30, was the foundation’s second highest fundraising year in its history. Its most successful was 2005. Donor financial commitments were maintained during the economic recession, she said.