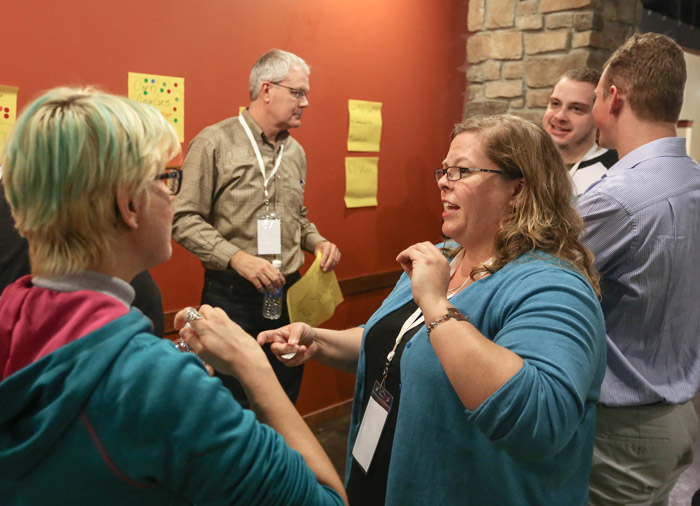 IOWA CITY—Startup Weekends have become popular, global events dedicated to helping people conceive and advance new business ideas, and the latest local edition, held Nov. 20-22 in downtown Iowa City, was no exception. Dozens of aspiring entrepreneurs, tech types and business experts descended on the new MERGE space on the Pedestrian Mall to see what businesses they could get off the ground.

But starting a business and keeping it going are two different things. And while many tech investors spend their time chasing the next billion-dollar “unicorn,” the odds of a stratospheric startup coming out of a Startup Weekend event are slim at best. Organizers claim that nearly 40 percent of businesses launched at Startup Weekend events are still going strong after three months, but that means that more than half do not.

So why do people keep coming back to Startup Weekend, an event that’s been held annually in Iowa City since 2011, and in 200 other cities around the world? The real answer centers around issues of connection and support.

Many of the organizers and participants in this year’s event said that they had no specific goal of trying to find or develop the next billion-dollar app from the teams assembled. Startup Weekend newcomer Aaron Van Noy, a local web developer, said he attended this year’s event to “get to know new people in the tech community mostly. But also to get to know like minded people who are interested in learning how to solve problems and start new adventures.”

Mr. Van Noy’s view is one shared by many of those who have participated in Startup Weekend for years.

“Events like Startup Weekend bring these crazy people, like me, together to build ideas together,” said Levi Bostian, a Cedar Rapids-based developer, and the founder of me2, an app for cancer patients and their families, which launched at Iowa City’s 2014 Startup Weekend. “It is so amazing to see 75 people all get together for an entire weekend, get little sleep, work harder than they ever have, and pour everything they have with their team into an idea to try and build a business in 54 hours.”

Scott Swenson, regional director at Kirkwood’s Small Business Development Center, noted that honing the business skills needed to survive in the startup community is an essential part of the Startup Weekend experience, and arguably more important than starting a business at the event.

“Startup Weekend should not be about the idea,” said Mr. Swenson, “but about the tools and approach for building a startup as well as meeting awesome people in the network.”

Indeed, Startup Weekend events in the Corridor have traditionally spent less time focusing on creating the next Uber, and more time providing a crash course on how to develop a raw idea into a minimum viable product. But that approach raises another question for organizers: How does one determine if their experience at a Startup Weekend event is a success or a failure?

Although the Corridor’s startup community is proud of the success stories that have come out of Startup Weekend events, such as Nexstep.io and HowFactory, this and similar events have survived and thrived because they redefine the typical notions of success or failure, said David Tominsky, an event organizer and program manager of the Iowa Startup Accelerator. He views failure at Startup Weekend as “people walking away and giving up. The quitter loses. The people that, when faced with a challenge, refuse to push through.”

Sharing Mr. Tominsky’s perspective, Mr. Swenson told the Corridor Business Journal that failure at a Startup Weekend equates to “not trying or not even starting.”

“A startup is about a lot of small failures and what you learn from them,” he added. “That’s where development and breakthrough happens.”

The reality is that, as ICAD Group President Mark Nolte highlighted, “most of these businesses will end with a handshake and some hugs on Sunday evening,” so true failure in this environment is not facing the challenges that come from attempting to start a new business with new people.

In other words, Startup Weekends serve as a mini-nursery for nascent business ideas, helping them to find a footing before being exposed to the brutal honesty and efficiency of the market. In that way, it’s little surprise that entrepreneurs and community members keep returning to these events, where natives and newcomers can network and solve problems, both little and big, all in a safe space.