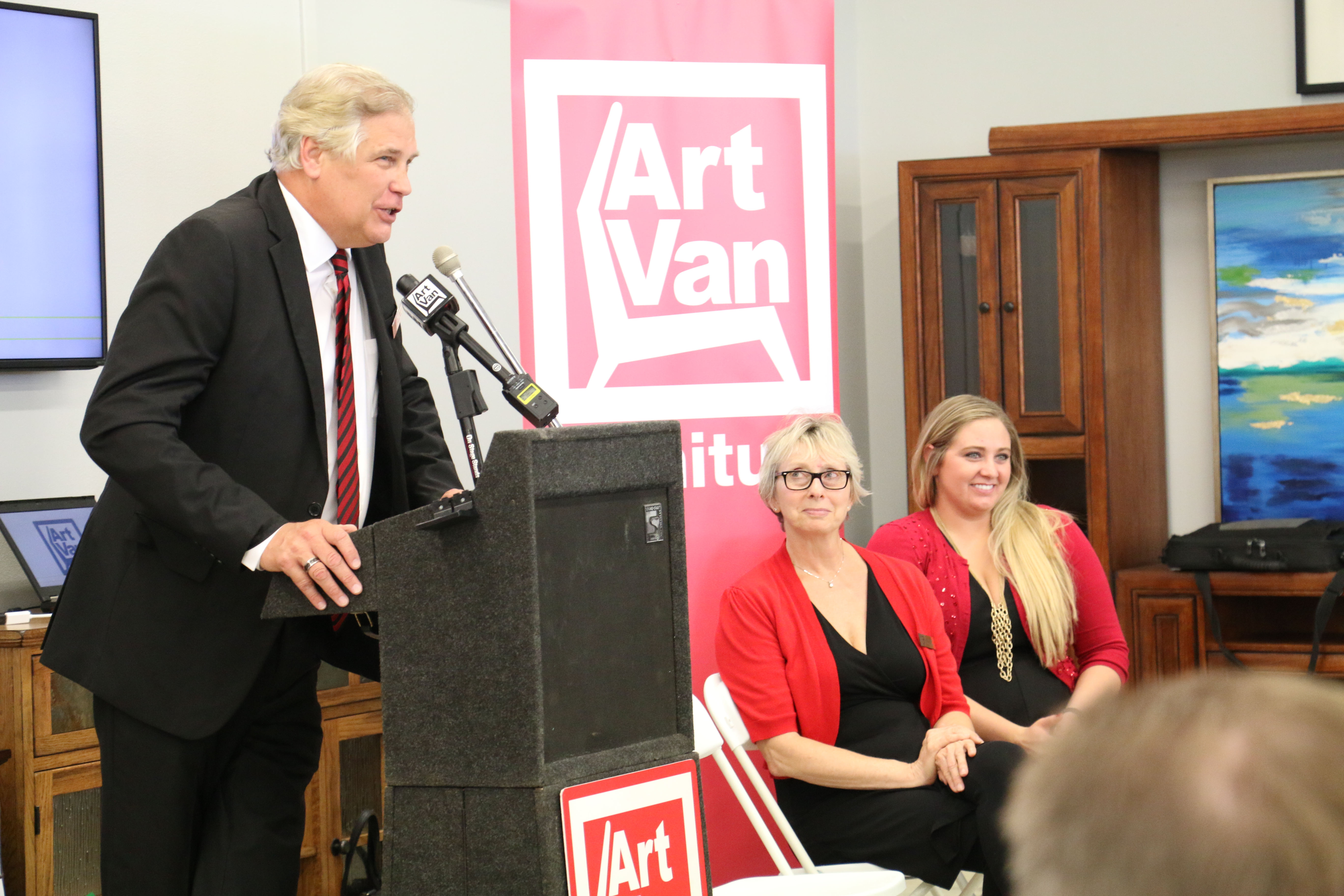 Seventy years after the business’s first location opened, Simpson Furniture in Coralville and its flagship location in Cedar Falls have been sold to Michigan-based furniture dealer Art Van.

The sale of the store’s Coralville location at 2300 Jones Blvd. was officially completed May 3 following an agreement made in December. Both stores were then remodeled at a combined cost of $1.2 million, which preceded the Coralville location’s re-opening on June 11.

The Coralville store will continue to be managed by former owners Dale and Deb Emmert, who joined Simpson Furniture in 2004 when Mr. Emmert came onboard as CEO.

“We’re still in charge, it’s just that Art Van gives us so many things we didn’t have before,” Mr. Emmert said at a ribbon-cutting ceremony July 14. “They introduced us to a lot of lines we didn’t buy, and then they have the best of the best. Actually, their prices are better than ours were. It’s a win-win for everybody.”

In addition to new brands and styles, joining Art Van also increases the store’s mattress inventory, largely with the PureSleep brand, which Art Van launched in 2009, according to Bed Times Magazine. The two stores have also added 15 staff members since the sale, bringing their total to more than 60.

Like Simpson Furniture, the roots of Art Van also go back more than a generation. The company was founded by Chairman Van Elslander, who opened the company’s first store in Detroit in 1959. Art Van CEO Kim Yost described the acquisition of the Coralville store as a partnership, and stressed the value of teaming up.

“In the world today, part of the set of hard realities of this economic environment, and one thing we should all be considering and embracing as Dale and his family did, is partnerships,” Mr. Yost said. “As individuals, both personally and professionally, we can go far. But we can only go so far. But as partners, we can go endlessly. What we did today and what you’re going to be experiencing is the partnership of two great families.”

Ms. Emmert, executive vice president, said the decision to sell the store was made easier by a good relationship between the new franchisees and their parent company, which was largely facilitated by David Braun, the director of franchise operations and development for Art Van.

“We felt like family since the very first time David Braun flew out to see us. They were all very warm and gracious, and I think that’s part of the reason that we joined the team – because we do feel like family,” Ms. Emmert said.

The sale price of the 25,480-square-foot building in Coralville was not publicly available at the time of publication. However, the Johnson County Assessor’s office this year valued the building and its 1.7 acre lot at $1.85 million.

Headquartered in Warren, Michigan, Art Van has locations in Michigan, Ohio, Indiana and Illinois, with the two newly acquired franchises in Iowa marking the company’s first stores west of the Mississippi River.