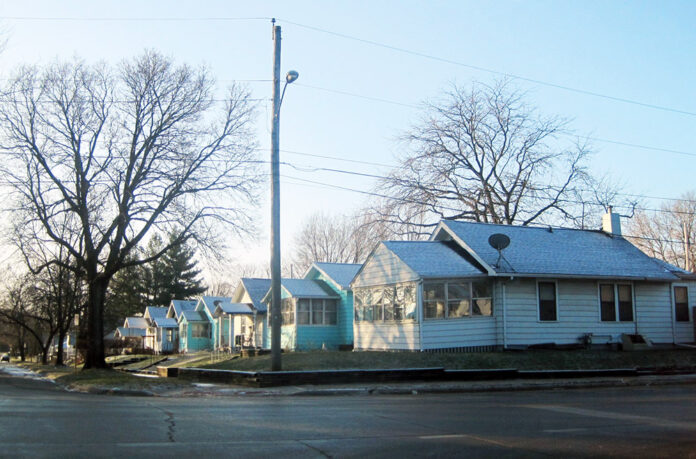 The Community Reinvestment Act helps ensure that banks make credit available to their entire community, including working class communities like this one in northeast Cedar Rapids. PHOTO DAVE DEWITTE

Plans for the first major update to the Community Reinvestment Act (CRA) in a quarter-century are being greeted warmly by Iowa banking groups, which say the law is behind the times, contains ambiguities and should apply equally to credit unions.

The CRA was enacted in 1977 to encourage FDIC-insured institutions to help meet the credit needs in their local communities, including low- and moderate-income neighborhoods, rather than simply seeking out the least risky or most lucrative lending opportunities. It’s best known as a tool to fight “redlining,” or the restriction of ownership opportunities for minorities.

Banks are generally evaluated and rated by the Office of the Comptroller of the Currency (OCC) on their reinvestment in their communities every three years, with banks in the largest size category facing the most extensive evaluations, and smaller and intermediate-sized banks receiving more streamlined treatment.

CRA ratings are made public, and poor ratings may form the basis for objections to an institution’s application to expand through branching, acquisition or mergers. However, the law does not require banks to make risky loans, and the vast majority of banks examined every year in Iowa receive a “satisfactory” rating, a step below “outstanding.”

Plans for a major revision of the CRA were announced Dec. 12, and proposed rules were published in the Federal Register Dec. 30, triggering a 60-day public comment period.

Changes proposed “will clarify what qualifies for credit under the CRA, enabling banks and their partners to better implement reinvestment and other activities that can benefit communities,” the OCC said in announcing the changes. Regulatory agencies will also create a definition of “assessment areas,” tied to where deposits are located, ensuring that banks provide loans and services to low- and moderate-income persons in those areas.

Banks have lobbied for these and other changes.

“We are supportive that it would modernize the definition of a small business loan, it would promote lending to family farms and would provide a list of pre-approved CRA activities to promote fair, equitable and transparent implementation,” said Dave Caris, CEO of the Community Bankers of Iowa, a membership organization for independent, locally controlled banks in the state.

“More importantly,” he added, “there is a provision that would allow community banks under $500 million to opt into a revised regulatory framework that would avoid a one-size-fits-all approach.”

A size-based regulatory approach is important, because the same regulatory requirements that might be easier for a large, nationwide bank to comply with could be stifling to a smaller institution. Regulatory costs are one of the factors that have driven consolidation in the banking, Mr. Caris said, and the CRA is one component of those regulatory costs.

The current size thresholds governing which banks are small, intermediate and large have become outdated following the extensive consolidation and growth in the industry since the CRA was enacted, according to the Community Bankers of Iowa.

The group said its members also see a growing trend of examiners redefining a bank’s assessment area during its examination – sometimes adjusting it every time they examine a bank.

Terry Meyer, the president of Linn County’s smallest bank, said he doesn’t lose sleep about the CRA or its pending rewrite. At Palo Savings Bank, he said the focus has always been on local lending, so meeting the CRA’s requirements has not been a problem. As a small institution, CRA regulation is somewhat streamlined – something the bank hopes will be preserved when the law is revised.

He added the bank’s local emphasis is its biggest advantage, and that if it makes non-local loans, it’s usually due to a specialty in multifamily housing lending that has worked out well for Palo Savings Bank.

While the association is still reviewing the proposals, it highlighted some points that would seem to benefit banks. For example, banks currently have difficulty knowing what kinds of community projects and investments would qualify for credit in a CRA examination, often finding out only after their review has been published.

The proposed revisions would require regulators to publish an illustrative list of “pre-approved CRA activities” that would qualify for credit in the examinations, the association said. It also expressed appreciation for efforts to develop performance standards that would add transparency and consistency as banks plan and execute CRA initiatives.

“We believe that updating these rules to reflect the reality of financial services today can enhance banks’ ability to invest in their communities and achieve the laudable goals of the CRA,” the IBA said in its statement.

The Iowa Division of Banking plans to comment on the proposed changes, which Superintendent of Banking Jeff Plagge sees as overdue.

Forty years ago, the regulatory climate was dominated by banks, Mr. Plagge noted; today, the competitive landscape for credit is “heavily fragmented,” with many nonbank participants including credit unions, mortgage brokers and internet-based institutions.

“If you’re staging a 100-yard dash with 10 runners, but you’re only timing six of them, what does that really tell you about the race?” he said.

“Figure out how to reward banks for serving these [rural] markets, rather than just giving them more reporting requirements,” Mr. Plagge said, adding, “the CRA rewrite has an opportunity to do something positive.”

As the state’s banking associations provide input on the rules published in the Federal Register, one of the points they are sure to raise is their desire to have credit unions comply with the CRA. On that point, both the Iowa Bankers Association and the Community Bankers of Iowa seemed to speak with one voice.

“We believe the same kind of regulatory oversight should occur with credit unions, too,” said Mr. Caris. “They’re sucking deposits out of rural areas of the state and loaning them out in affluent areas.”

Implied in Mr. Caris’ comments is the contention that credit unions have a competitive advantage by being able to transform deposits from stagnant or slower-growing rural areas into loans in hot growth areas such as Waukee, Ankeny and West Des Moines.

It’s equally likely that credit unions will be commenting and lobbying to be excluded from CRA regulation.

“In short, there’s never been any evidence that credit unions have engaged in any anti-consumer discriminatory lending practices,” said Jason Hupfer, CEO of lobbying firm PolicyWorks and former vice president of government affairs for the Iowa Credit Union League.

In the competitive push and shove between banks and credit unions, Mr. Hupfer said banks are now holding out their regulated status under the CRA as a “badge of honor.” He says Congress specifically excluded credit unions and covered banks by the law, however, because banks were a “bad actor” in discriminatory lending, and credit unions were not.

To be clear, banking groups are not just lobbying to have credit unions covered by the revised CRA. They also believe the rewrite needs to level the playing field with the growing number of nonbank financial institutions and internet banks, which lack physical branches to define their lending areas.

Distrust of the CRA rewrite runs deep in some circles. Democrats and consumer groups, including the National Community Reinvestment Coalition, have warned against watering down a law that while imperfect, has helped control redlining and benefitted poorer communities.

At a time of rapid branch consolidation by banks, they can point to statistics showing that banks are shuttering branches faster in black neighborhoods (a decline of 14.6%) than in predominantly white neighborhoods (9.7%), according to a report from S&P Global Market Intelligence.

Critics also cite a 2018 report by the Center for Investigative Reporting that redlining persists in 61 metropolitan areas. While none of the metro areas are in Iowa, a follow-on report by the Associated Press piggybacking on the center’s data pointed to Iowa City as a problem area for lending to Hispanic mortgage applicants.

The report said Hispanic applicants in Iowa City were nearly four times more likely to be denied conventional mortgages than non-Hispanic whites, the widest disparity in the nation.

The data behind that conclusion was limited in scope, however, coming from one year’s worth of mortgage application data from one institution – Hills Bank, which was rated “outstanding” in its CRA review for that period.

Hills Bank said the mortgage denials to Latino applicants appeared inflated because of the unusual manner in which it reports data to the federal government, including some loan inquiries that appeared as mortgage applications. Some borrowers were also counted twice because they were denied for both first and second loans, according to media reports.

To say the CRA rewrite faces smooth sailing would be an exaggeration. Martin Gruenberg, a member of the Federal Deposit Insurance Corporation board, said the proposal is “deeply misguided” and “will fundamentally undermine and weaken the Community Reinvestment Act.” However, Mr. Gruenberg was the sole FDIC board member to voice that opinion.   CBJ