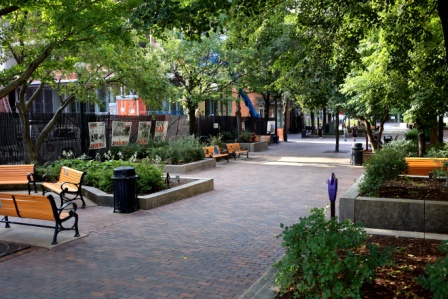 IOWA CITY—David Schwindt spends his days walking and bicycling around downtown Iowa City as the police officer dedicated to the downtown district.

He has been in the position since January, which was created then with the help of funding from the COPS Grant Program and the Iowa City Downtown District. He has been with the department since 2001.

“My goal is to keep the area so that everyone feels welcome and able to come in and use the space, without pushing anybody out,” Mr. Schwindt said.

Despite Mr. Schwindt’s presence downtown, there have been a growing number of complaints concerning bad behavior, aggressive panhandling and overuse of public spaces in the area.

Complaints to Mr. Schwindt and staff at the Iowa City City Manager’s office led to several proposed ordinances to curb some of the behaviors.

During the spring and summer, the city and the Iowa City Downtown District worked to address the complaints, many of them in the area of Dubuque and Washington streets. The most common complaints include: harassment of passing pedestrians, loud and vulgar language, storage of personal property in public areas, smoking, littering, aggressive panhandling and obstruction of pedestrian walkways and amenities.

The proposed changes include prohibiting people from being inside planters and lying on the planter ledges. People will not be allowed to sit on skinny curb-style ledges of downtown planters.

With an increasing number of people keeping personal items in the public spaces downtown, the city is proposing an ordinance prohibiting storage of items in or around planters, tree rings or other public amenities. People would not be allowed to use commercial-sized shopping carts in the downtown.

The city is discussing offering locker storage space downtown for free for the people who are keeping their belongings in the public spaces, Mr. Schwindt said.

Over the past few months, there has also been an increase in people lying on public benches. The ordinance would restrict lying on benches between 5 a.m. and 10 p.m.

The ordinance would further restrict panhandling in the district on sidewalks where there are parking meters and would prohibit panhandling within the public entrances to the pedestrian mall.

“The ordinances will give our community police officer some tools to help make sure that we can keep order in a very congested walking environment and that everyone is respecting the public infrastructure in place, like the benches and planters.  That includes kids, students and those living on the streets.  It’s everyone’s downtown,” said Nancy Bird, Iowa City Downtown District’s executive director.

The proposed ordinance also includes not allowing personal use of the electrical outlets in the downtown. The electrical system is not designed to accommodate personal uses, but serves public events and downtown mobile vendors.

“There’s certainly some behavior that we can and have been addressing through increased enforcement, but there are others we don’t have the authority to address based on the city code,” said Geoff Fruin, Iowa City’s assistant city manager. “These are intended to give officers additional tools to address the additional concerns.”

If passed, the ordinances can be amended as the city sees the various impacts of the changes, Mr. Fruin noted. The city would also allow those cited the option to volunteer downtown instead of paying a fine.

“Certainly there are people with varied opinions on the matter. I think there’s some belief that these ordinances are targeted toward the homeless or transient population, but that is not the intent,” Mr. Fruin said. “What we’re trying to address is the behaviors and making the pubic space as welcoming as it can be for all people. We certainly recognize there are needed services for some of the individuals down there and these ordinances aren’t ignoring that fact. Those conversations are going on.”

“Some feedback we’re getting from businesses right now is that patrons are avoiding certain areas of downtown because they don’t feel welcome. Certainly for businesses in those areas, that’s a very troublesome trend they don’t want to see continue,” Mr. Fruin said.

“The ordinances are not intended to resolve homelessness, but this very public conversation has been useful in highlighting issues around respect for those who have hit hard times or have mental illnesses. Hopefully we will see additional support and resources for those entities that are working on supporting those that need help as a result,” said Ms. Bird.

Mr. Schwindt noted that he rarely writes citations or makes arrests while on patrol downtown, but gives frequent warnings.

“If anybody were to pull my stats, they’d find that I probably give 100 warnings or more for every one citation I write,” he said. “My goal, if this is passed, is to enforce the ordinances in a way that makes it inviting for everyone and pushes nobody out of the space. My ultimate goal is to never write a citation, yet protect the space at the same time.”

Mr. Schwindt isn’t sure the reason for the recent increase in complaints, though he has a few guesses.

“One thing I’ve noticed this year is there are a number of people who I see in the downtown area that I’ve never seen before. When I talk to people, they say people come here because they hear how great it is and they hear about Iowa City and how we take care of people here,” he said.

Since Iowa City has only had a dedicated officer since January, the increase of complaints could simply be because of that presence.

“I don’t have proof, but I have a feeling now that people know about my position, they call in and file complaints more. I don’t know if the behavior has gotten worse, but the reporting has increased,” he said.

In September, the city will begin public discussions about a downtown streetscape plan, which will be an important part in the ongoing changes, Mr. Fruin said.

“Design of the space and long-term social service needs are not quick fixes. They take great study and thought and that’s taking place right now. By no means do we think that ordinances alone are the solution, they’re just a piece of the puzzle.”