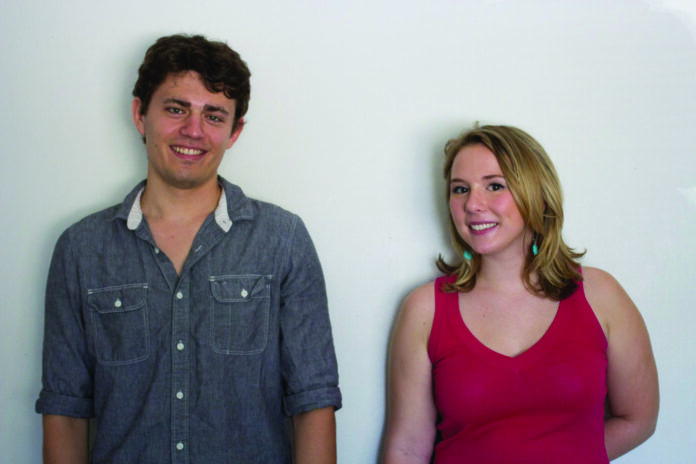 IOWA CITY–Riley Gardam and Jacob Langenfield, recent University of Iowa graduates, skipped a few steps after graduating and started their own business right away.

The two graduated in May and were involved in Iowa Community-Integrated Geography Organization (ICIGO), a student group on campus. From their experience in the student organization, they saw a need for services like data cleaning and data analysis, which lead to the creation of Needle Analytics, based in Iowa City.

ICIGO is an interdisciplinary group interested in hands-on applications of spatial methods including GIS, remote sensing, GPS and spatial. ICIGO is composed of students that take advantage of GIScience, in their fields of study, including public policy, health, urban planning, engineering and business. The group partners with non-profit organizations, campus groups, and government agencies to produce useful spatial analyses and products.

Projects are executed in teams, pairs or individually. Through that group, they worked on mapping and data projects for local nonprofits at no charge. With the new company, Needle Analytics, they hope to cater to private businesses. They have received several startup awards which have also led to grant opportunities that are contributing to the company’s funding.

“Mountains, you can plot on a map. Behaviors are the same way,” said Ms. Gardam, who majored in geography.

They plan to target small- to mid-sized companies in the region and throughout the state.

The business offers data cleaning, where they transform raw lists from their original formats and smooth, clean, sort and blend them into a document. That can give companies flexibility for data selection.

The data analysis services include a map and analysis of data (includes comparisons of the company’s data with Needle Analytics demographic, behavioral and geographic information). For example, Ms. Gardam said, if a children’s clothing store is interested in expanding, they can ask Needle Analytics for information such as where are areas with the most children and income levels in certain areas.

A company can learn about how effective their marketing efforts are and see maps and data that will give them insight into how to better operate business.

“A lot of businesses don’t know what they’re looking for. They have a problem and they are looking for a solution,” Ms. Gardam said.

Already, the two have learned about the challenges of starting a business. “We’re working off grants and bootstrapping our way along,” Ms. Gardam said. “It’s always a shock how fast you can spend money.”

Being young, recent college graduates can also be a tough sell to clients, Mr. Langenfield said. Building credibility and trust with clients can be a challenge.

“A lot of people start businesses younger. We didn’t think it would be a huge problem and it hasn’t been,” Ms. Gardam said.

She said they also didn’t realize the seasonality of business; they started the company during the slower summer months. An important piece of starting a new business and gaining customers is persistence, Mr. Langenfield said.

“We have some clients, now we’re trying to build a base and spread the word,” Ms. Gardam said. “The goal is to build it up into something that can support us. To bring in new technology that (businesses) didn’t know they could afford and beat the big guy.”

“We want to show the importance of data and what you can do with it,” said Mr. Langenfield, who majored in economics.

One of the projects Mr. Langenfield completed during his time with the student organization was called the Bloom Index. He used several different categories and data to rank states based on how Steven Bloom, a UI professor who wrote a controversial article in the Atlantic about Iowa, described the state.

The index looked at percentage of the population over 65; treatment admissions for meth use per state; number of hunting licenses; percentage of Christians and percentage of impaired river stream lengths.

Mr. Langenfield said they found that actually Hawaii is the state that is closest to Mr. Bloom’s descriptions of Iowa. Iowa ranked No. 5.

Awards the company has received include: the Merle Volding Business Plan competition; the People’s Choice Award at the BELL Business Fair; and the Iowa Center for Enterprise business plan competition award.