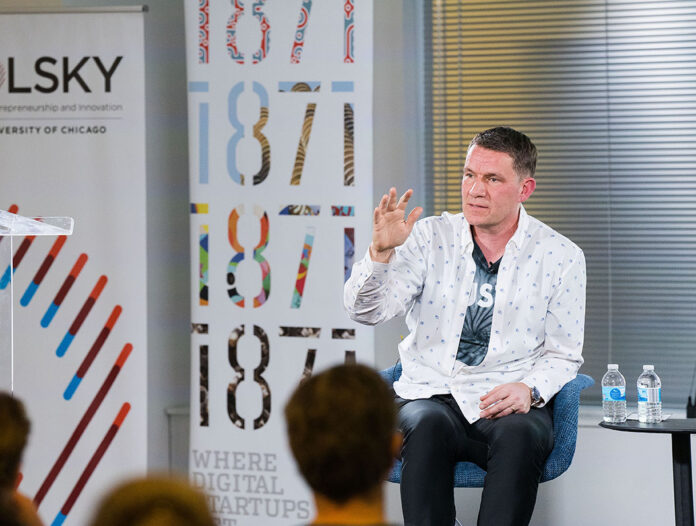 Scott Case speaks as part of the University of Chicago’s Polsky Center for Entrepreneurship and Innovation SeedCon event in February. CREDIT UPSIDE

Scott Case is a technologist, inventor and entrepreneur who has helped change the way we travel. He’s best known as a founding partner in Priceline.com, the website that redefined how consumers shop for flights and hotels, and is at it again with Upside.com, a new business travel platform that promises to transform booking and travel management into a smooth and rewarding experience.

Scott has also been active in supporting startup ecosystems around the country, serving for three years as CEO for Startup America Partnership, a segment of the Startup America initiative launched during the Obama administration. He also helped create the Founders Forum, an online venue for CEOs and CFOs to come together and discuss the challenges facing their businesses, in an effort to build relationships and find collaborative solutions.

We connected ahead of his “ask me anything” session planned for this year’s virtual EntreFEST, set for June 4-5, to talk about his earliest days as an entrepreneur, the importance of authentic business relationships, and maintaining and accelerating your business amid the pandemic. Catch the full, uncut podcast below, and consider checking out his AMA session at EntreFEST, entrefest.com.

Scott, many of us know about your success as the founder and CTO at Priceline, but take us back to the beginning – did you always have an entrepreneurial streak?

I just turned 50 and I’ve been an entrepreneur my entire life. I was lucky to be exposed to computers early in my life with my father who worked for a now long-gone company called Control Data Corp. I had access to computers, which meant I could learn how to code on my own and I got addicted to it. I got excited about using computers and technology, particularly information technology. Even though I did a bunch of weird stuff and won science fairs and things, my interest was using my imagination to create things from an information technology standpoint.

I went to college and studied computer science, got an engineering degree. In my junior year, I was approached by one of my college professors who was starting a software company. This was like 1991-ish. It was a flight simulator to run on a personal computer. The whole mission was to teach pilots how to fly IFR, which is when you fly in the clouds by instrument [instrument flight rules].

We had to write a flight simulator and then we wrote a rules-based AI engine that simulated what a flight instructor would do. It was a training course. It was a fantastic product. It was on the market for almost 20 years. We shipped the thing on six floppy disks, it was insane for the time.

We built a fantastic product, but I learned one of my first entrepreneurial lessons at that company. That was, just because you build a great product does not mean that people are going to buy it. I call it the Field of Dreams problem – if you build it, they will come was sort of our MO. We were product people, we were engineers, but we weren’t marketers. We spent two years building a great product and then we spent two years figuring out how to sell the thing. I learned how to sell on the phone and it was one of the most valuable lessons.

You would go on from there to link up with Jay Walker and Walker Digital in the mid-90s, which eventually led to the launch of Priceline. What was the idea behind that?

The idea was simple, but the execution is everything, and our timing was good. The internet was growing, there weren’t a lot of things that you could do on the internet from a commerce standpoint. And we had to invent all the technology from the ground up because nobody had done anything like it before – in particular, naming your own price flipped the inventory equation, so the customer was in charge of what they wanted. Now you had to match that up. Not only were we early on the internet, but we were early in understanding how to change the dynamics of e-commerce.

We launched the company in, I think, the spring of 1998. We went public a year later. We crossed $1 billion sales threshold a year after that. We launched six or eight products in that time period across the board, and then the dotcom bubble burst. And I learned one of the other lessons, which is, it’s really fun on the ride up. Not so fun when you have to let 450 people go and shut down. That was humbling. You think that you’re on a rocket ship and that nothing can stop you, and then the world changes.

Read the full interview with Scott Case in the June 1 print or digital editions of the CBJ. Not a CBJ member? Join today.