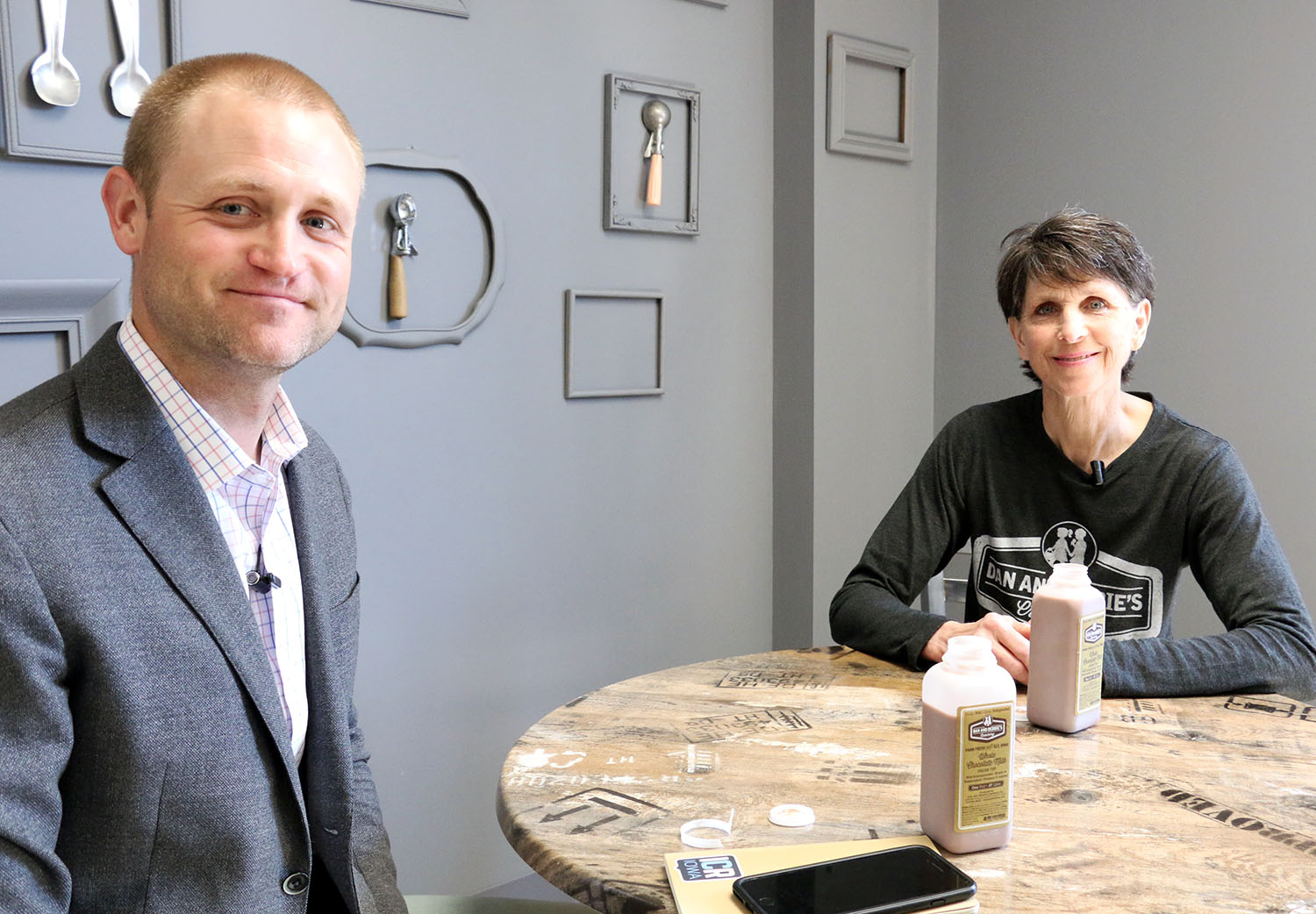 Nate Kaeding with Debbie Takes, of Dan and Debbie’s Creamery in Ely.

Sponsored by West Bank, this is the latest edition of the CBJ’s new Q&A feature with Nate Kaeding and notable Iowa business and cultural leaders, available first to CBJ members. Read more about the idea for the series here, and watch the video interview below or at the CBJ’s YouTube channel.

There is great satisfaction to be found in the solemn act of completing a task. Debbie Takes, a dairy farm­er and co-owner of Dan and Debbie’s Creamery in Ely, personifies this axiom.

Twice a day, she and her husband Dan go about the work of milking the 150-plus dairy cows on their family farm just south of town. It’s a chore borne out of necessity; not only does the health of the cow rely on it, but so does their family-owned creamery business, which uses the milk they produce to create some of the region’s very best food products. Specializing in cheese curds, ice cream and chocolate milk, the Takes fami­ly’s products have found their way onto the menus of many Iowa City and Cedar Rapids restaurants.

Of course, all of that work means Debbie essen­tially works two full-time jobs, every day. But she seems all the better for it. Her idea of “work-life bal­ance” is sneaking away during a 16-hour work day to spend a few minutes holding one of her grandchil­dren. Her work is her life, and she shares both with her husband and children who all have various roles within the business.

I recently caught up with Debbie at the creamery to share a cold bottle of chocolate milk and a conversation about work ethic and the joys (and challeng­es) of working along­side family members:

NK: When I think of farmers and food producers like yourself, the first thing that comes to mind is the daily grind, the hard work. What does your dai­ly routine look like?

DT: A typical day for me would be getting up around 5 a.m. and going out and milking the cows. Dan and I are still the sole milkers of the farm. It takes two to three hours of milking time, and then we typically have another hour of calf chores. Every cow on the farm has a calf, so we have up to 30 calves at a time that are at a bottle age, where you have to feed them twice a day. After milking, I usu­ally clean up, and on days that we’re not producing something in the cream­ery, I’ll come and help bag cheese curds. That’s typically two hours, and then …

Well, 11 o’ clock – I try to get to the creamery around then. We’ll bag cheese curds and then clean up the facility. If we have a couple more hours, we’ll make some ice cream. If it’s a day where the curds aren’t being processed, we’ll make ice cream for 5 hours – there’s two ladies that help me, my sister-in-law and another friend – and we can usually knock out about 100 gallons of ice cream during that five-hour period. That brings you to 5 o’ clock, which means you have to head home and milk the cows again. So you’re talking about not getting in until 9 that night, and you’d better head to bed pretty soon since it all starts over again the next day.

Was this work ethic instilled in you at an early age?

Oh, yes. I grew up on a farm. We did farrowed hogs until I was about a teenager. Everybody on a farm typically has to pull their weight. It just makes everything easier if ev­erybody chips in and helps, and we expected that of our children as they were growing up, whether they liked it or not. We had days of the week when they absolutely had to do their chores. And they were lucky there were six of them, because then they only rotated about every two or three days of helping.

This is a job where it’s a necessity to be on site every day. Are you traveling much? Do you get vacations?

Never – we’ve never had a vacation since we started milk­ing, which was 20 years ago. Once in a while, when the kids were in high school or something, I would get out of one milking to watch a volleyball tournament or some­thing like that, but typically you just have be there all the time on a farm. It’s nothing where you can just say, “oh, I’m going to skip today,” or call somebody and say “can you come help” – it’s pretty much hands-on, by whoever is most familiar with the cows.

How about your staff? Are they working the same sort of hours?

Well, we wouldn’t expect somebody to work 16 hours like Dan and I do in a day, but … we’ve really been lucky. Everybody we’ve hired has been will­ing to go that extra mile for us, because they know how im­portant this business is to us. And we do have a lot of family members, so they’re used to this and they understand. It’s just part of what it is.

You look down the ros­ter of your team here and there is a lot of family. Talk about the rewards and challenges of work­ing with your family.

It’s always a challenge. Most­ly it’s because everyone has their own opinion of how they want to run things or how things should go, but in the end, our goal is for it to be successful, so we give and take a lot. We always want to take input because we’re learning all of this together at the same time. All of us have a different opinion, but we usu­ally can come to an agreement if we all say, “Now what would be the best for this business?” But we’re more than open to them [family members] giving us advice or us giv­ing them advice about what we think they should do.

You and Dan have got the next generation here and they’re part of the business, but that’s cer­tainly not the trend across the Midwest. A lot of the younger generation don’t want to stay on the family farm – they go off to college and then move to the city.

Well, you always hope your kids will come back. When we started 20 years ago, we had never milked a cow in our life. We went to a few farms and just saw what they did. We knew we could work hard – both of us are hard workers – but we had six banks turn us down when we first tried to get our dairy loan, and I told Dan if one more turned us down then we would just forget that dream and go on to do something else. Luckily the seventh one said yes, and it was just the best way to raise the kids. They learned a work ethic that can’t be learned in school because you’re so responsible when you’re a farmer. You can’t expect someone else to take over, you can’t call in sick – it was just the best circumstance. Plus, I love being able to see my kids every day and we’re starting to get a few grandchildren, and that’s the bonus of it all.

It’s hard enough operating a farm, but you and your family are also in the food production business. What was the catalyst for starting the creamery?

Well, one reason we decided to start the creamery was milk prices are so up and down. The downs are horrible and the ups are wonderful, but they just need to be more consistent. We kept putting it on paper, thinking if we could sell our milk to a creamery, which is our business, everybody’s going to win. We could keep the price a little steadier because the creamery’s going to be doing better, which in turn makes the farm do better. So it was just kind of a no-brainer for us. We were ready to do it, but we didn’t do it until the kids were all older because we thought it would be too much when they were younger. But now that they’re all onboard with us helping, it’s made it much easier. The timing is perfect for now.

How would you describe the dairy industry in general right now? How have you seen the business change over the last 5 or 10 years?

Well, I think it’s getting a little worse for dairy farmers. There are some who are at the age where you’ve either got to improve and modernize or get out – it’s just kind of weeding people out right now. The big ones are coming in and the prices are so bad sometimes, so if you don’t do a lot yourself and you hire a lot of [help], you can’t really afford it. Dan hardly ever… once a tractor breaks slightly, he can fix it, he would never take it off to somebody. You just have to do a lot yourself. I think some of the creameries that are taking other farmers’ milk, I think they’re going to start putting quotas on what they [the dairy farmers] can produce, and that’s hard … because I think they want to control how much milk comes in.

The creameries will take their milk, but they might penalize the producers for anything above what they’re shipping or producing, or what their average is. So that’s another thing that scares us. If you have a big farm and just put a new facility up, you might get a few more cows to help pay for it, but if they’re telling you you’re not going to get anything for that milk, you’re caught between a rock and hard place.

The setup here with the creamery and shop, being just off of the main drag in Ely and adjacent to the bike trail – what a great asset for not only Ely, but the entire Iowa City-Cedar Rapids region.

Yeah, I think it turned out far better than we could have ever expected. We let people view what we’re doing in the creamery during the week if we’re up and running … we’re in a great location because it’s basically halfway between Cedar Rapids and Iowa City, so it’s a perfect 10-minute ride from either place for people to come out and see. We’re trying to be more educational with our tours so school kids can figure out that milk didn’t just come from the store, it came from Holsteins that are two miles down the road and they made chocolate milk out of it. So we’re trying to educate and the town has been so accepting of us. And I hope we’re doing as much for the town as they’ve done for us.

What other profession would you most like to attempt?

I’ve always admired elderly people, so I’d like to work with them somehow.

I love Dave Ramsey. I listen to him on the radio every chance I get.

In terms of news, how do you keep in touch?

WMT – when we’re milking, we’ll listen to that.

I love watching “Chopped” because they’re under stress and trying to create something in a short period of time.

If you had 30 extra minutes in each day?

I would go kiss my grandbabies.

In one sentence, define success:

Just being able to be happy at the end of the day. You don’t have to make millions of dollars, you just need to be satisfied and happy.