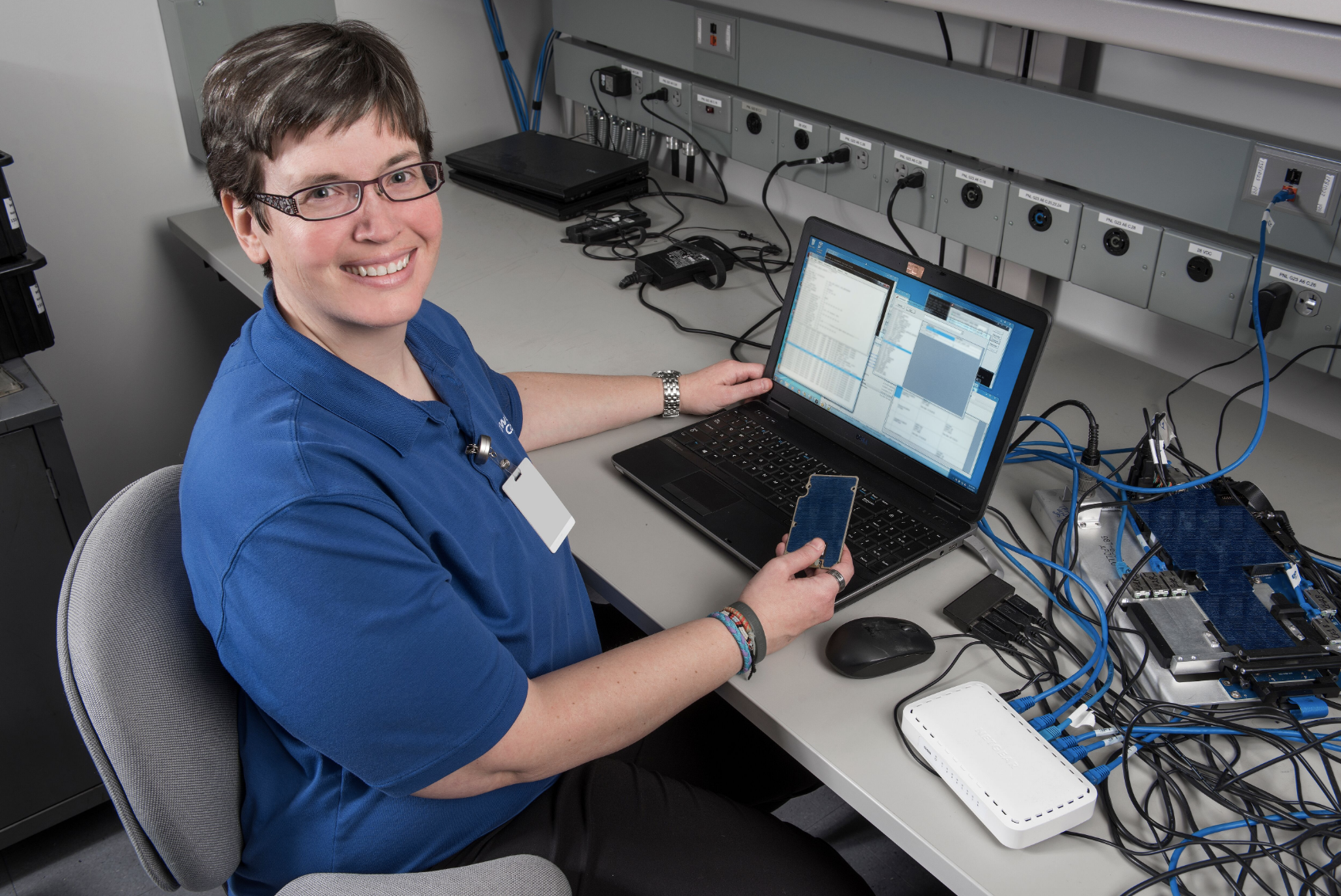 Engineers beginning a career in the Corridor earn the kinds of salaries most four-year col­lege graduates would envy – about $65,300 for an Electrical Engineer I, $63,700 for a Software Engineer I or $64,707 for a Civil Engineer I, according to Salary.com.

But of the hundreds of new engineers who begin careers in the region each year, the percentage who are women remains un­dersized. Only 13 percent of the engineers in the workforce are women, according to the federal Bureau of Labor Statistics.

The underrepresentation of women in such a well-compensated field is more than a challenge for the many companies grap­pling with a shortage of engineers. It also contributes to the gender pay gap in Iowa, in which women overall make an average of 79 cents for every $1 earned by males, according to the American Association of University Women.

Efforts to open engineering careers to more women through the education­al system are showing progress in recent years, although they have yet to make deep inroads into the profession’s glaring gender imbalance.

The percentage of women in the Iowa State University College of Engineer­ing has been stuck at around 16 percent for the last few years, although the over­all number of women has risen steadily, reaching 1,342 in the fall of 2018.

University and professional organiza­tions working to address the imbalance at Iowa’s two public engineering colleges are using living/learning communities, leader­ship development programs, female peer advisors and a host of other strategies to promote the success of women in engineer­ing. Even so, they’ve found there’s no silver bullet to slay the deeply ingrained social at­titude that engineering is a men’s field.

“We still send those subtle messages that it’s not for girls and you have to be really smart,” said Lora Leigh Crystal, di­rector of the Women in Science and Engi­neering (WiSE) program at ISU.

The LEAD program is for engineering students from minority populations and women. It provides many layers of sup­port aimed at improving academic, per­sonal and professional success, according to LeQuetia Ancar, multicultural liaison officer at ISU, including tutoring referrals, academic advising and acclimation sup­port for freshmen students.

One of the WiSE program’s biggest accomplishments has been to reduce the percentage of female “switchers”— those who start out planning degrees in engineering or science, but switch majors when they hit a tough patch.

“I’m one of the few people I know who hasn’t changed majors at least once,” said Elena Gladen, a mechanical engineering student from Minnesota who serves as president of the new ISU Women in Me­chanical Engineering chapter.

Ms. Gladen said engineering studies are “really challenging, both personally and academically.” Like some of those who later switched majors, she had a mo­ment of realization early in her ISU career when she turned in a poor performance on a test, and realized her past study hab­its wouldn’t guarantee success in such challenging subjects. She cut back on her extracurricular obligations, but still works part-time as a server at restaurant.

“If you have the right work ethic, I think most people who don’t think they could do something like engineering could actually do it,” she said.

Ms. Gladen has already completed one co-op experience at Collins Aerospace in Cedar Rapids, and is looking forward to another next summer at a Collins Aero­space location in California. The pros­pects of working in a heavily-male profes­sion haven’t dampened her enthusiasm for mechanical engineering.

“It didn’t have any effect on my deci­sion to go into engineering, although I certainly noticed it now that I’m here [at the ISU College of Engineering],” she said, adding that she’s heard that women engi­neers are sometimes given fewer projects, less important work or less responsibility in general than their co-workers.

“That’s something that definitely needs to be addressed,” she continued. “There’s been a lot of progress in inclusion, but now I think it’s just the unconscious biases.”

Ms. Crystal, ISU’s WiSE director, says there’s no doubt about the eagerness of employers to recruit women engineers. She continually reminds companies that they should start recruiting women engineers in their freshman or sophomore years and engaging them through internships or oth­er programs, because they are likely to be on a career track with an employer by the time they are juniors and seniors.

Collins Aerospace in Cedar Rapids is a leading employer of engineers in Iowa. The company uses internships and other programs to engage students, and recent­ly was honored by statewide nonprofit Women Lead Change for its Introduce a Girl to Engineering initiative. The event is held each February during Engineers Week, and last hosted 680 female middle school students at 13 locations with 300 employee volunteers.

Students were paired with engineers as they worked through a variety of activities such as build­ing prosthetic hands and assembling drones that represent different branches of engineering. Students also toured the company’s engineering labs and heard from keynote speakers about the impact they could make in engineering.

Turning in good projects and grades is not enough to guarantee career success for female en­gineering students, a fact that is recognized in pro­grams at both UI and ISU.

“We really empower our female students to as­sume leadership roles, whether it be in student organizations, WiSE or other things,” said Nicole Grosland, associate dean for academic programs in the UI College of Engineering and a professor of biomedical engineering. She said female students serve as academic peer advisors, ambassadors and

in leadership roles as part of the annual UI Society of Automotive Engineering project that designs, makes and races a mini-Baja car.

Both engineering colleges have chapters of the Society of Women Engineers that provide leadership opportunities and support women in the profession.

One thing that may help inspire more women to succeed in engineering is who they see at the front of the classroom: more women.

“I was a student in the early 1990s and at the time I don’t remember having one single female faculty member,” said Ms. Grosland. “Now within the college we have 16 in some capacity and every department has a female faculty member. There’s been a concerted effort to get females in those areas.”

It was one thing to be hired, quite another to be welcomed with open arms.

She encountered some male engineers who had never worked with a woman engineer. Others had worked with just one, and tended to enumerate mistakes they had made, voicing fears that she would repeat them. It didn’t take Ms. Svatos long to realize that it was by her performance that the potential abilities of many future female engineers would be judged, and she set out to prove herself.

She joined Stanley Consultants in 2002, playing a leading role in the growth of the global engineering firm’s environmental practice. She has provided spill prevention services to more than 100 facilities, acted as project manager for a federal Superfund site investigation and cleanup at a closed pesticide plant site in Georgia, and managed a complex site investigation at a coal-fired power plant in Nevada where wastewater from ash settling ponds was causing groundwater contamination.

Today, she leads 45 professionals who provide all of the company’s environmental and urban design/landscape architecture services. She takes advantage of every opportunity she gets to interest girls and young women in engineering careers, supporting them toward their goals.

“I tell girls engineering is a wonderful career that makes the world better,” Ms. Svatos said. She doesn’t sugarcoat the gender imbalance, telling them that while they can probably expect to be in a workplace minority, women overall are now welcomed in the profession.

One of the best ways Ms. Svatos has found to open girls’ eyes to engineering’s potential is the work she does with Engineers Without Borders, which takes on projects like providing safe water supplies to impoverished villages in underdeveloped countries.

“A lot of times we portray engineering as mechanically oriented and impersonal,” she said. “We don’t talk about how engineers are helping people.”

Ms. Svatos now serves under President Kate Harris, a former engineer herself. Like her predecessor, engineer Gayle Roberts, Ms. Harris has played a supportive role in Ms. Svatos career, and it’s something Ms. Svatos tries to emulate with the women who report to her. But now Ms. Svatos has other things to think about. Well over 60 percent of her staff are women, leaving men in the minority in her office.

Mindful of her early-career feelings of isolation as a woman, she strives to ensure that it doesn’t contribute to the same kind of environment for men.

“We want everyone to feel included and part of the group.”

Growing up with a father who was a successful systems engineer and a mother who worked in medical technology, there were fun things going on in the house, like building radios and computers. There was also ample help with her science and math homework.

Instead of drifting into engineering, Ms. Van Auken went toward it like a guided rocket. She took all the pre­requisite classes at Alburnett High School – even shop classes. She applied at only one engineering school, Iowa State University, and applied at only one company, Collins Aerospace Systems (formerly Rockwell Collins) where her father was an engineering project manager. She spent her summers working there during college.

After being hired at Collins Aerospace as a software engineer, she switched after two years to systems engineering, where her work on the Apollo crypto, an encryption system designed to meet new National Security Agency standards, was recognized in 2017 with the company’s prestigious Government Systems Engineer of the Year award.

Ms. Van Auken also received her first patent that year and was promoted to principal systems engineer. While women are still not the norm in her field, she’s never been shunned.

“There weren’t a lot of women in my classes for computer engineering [at ISU],” she recalled. “Coming in here to work where I worked, I didn’t have any issue with being the only woman in meetings. Right now, I’m the only woman on my team and I might even be the only woman in my department, but it’s never an issue.”

Apollo crypto is a card with embedded software that goes into Collins Aerospace’s data link radios to encrypt and decrypt transmissions. Ms. Van Auken worked on software architecture for the card and other security features. As “product owner,” she currently reviews new product requirements as they flow in, and figures out how to integrate them into the product to meet the needs of the company’s clients.

Such work is in high demand, and Ms. Van Auken can sincerely recommend engineering careers to the eighth-grade girls she greets during the company’s annual Introduce a Girl to Engineering program, held during National Engineers Week.

The students get to take part in projects such as building a prosthetic hand, which will actually be donated for human use, and help fill the gap in understanding what engineers do to make the world better.

“They don’t realize everything manmade has probably been touched by one or more engineers,” she said.

Even for someone with Ms. Van Auken’s background and family focus – she has a brother, Ehren, who is a software engineer – the engineering path was difficult at times.

“You do have to be motivated – engineering is hard, I don’t want to lie,” she said. “My first year at college was awful. I got progress reports and was failing classes, but I stuck with it and it got easier as the years went by.”

Ms. Van Auken’s advice to females interested in engineering is that while girls often want to be perfect all the time, it’s not good if those unrealistic expectations get in the way of their goals. It’s OK to seek tutoring, ask peers for help and to accept that a ‘C’ isn’t the end of the world.

“Give each other confidence,” Ms. Van Auken said. Without as many role models to inspire confidence, “I think women get discouraged and say, ‘I can’t do it, it’s too hard.’”