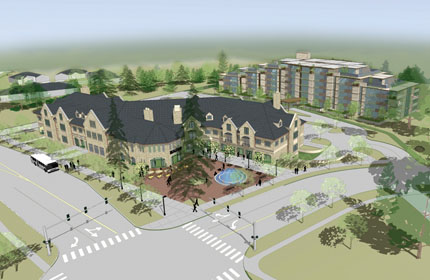 Construction could begin in 2012

Change is difficult, and a proposed mixed-use development could dramatically alter University Heights.

The town of 1,000 people surrounded by Iowa City on the city’s west side has remained relatively unchanged for decades. The small, bedroom community is home to mostly residential properties housing many lifelong residents and many of the more affluent professionals in the area.

Most visitors encounter University Heights during University of Iowa home football games in the fall, when many residents convert their lawns into tailgate parties.

Times are changing in University Heights, however. The UI Foundation recently bought the University Athletic Club, once a private club with a swimming pool and meeting space. The school plans for now to use it as additional meeting space, replacing some of the space that was lost when it received extensive flood damage in June. The UI is allowing the public to use the facilities for meetings, as well.

It was at the University Athletic Club where the town’s zoning commission met last week to discuss a proposed commercial development next door. Known as One University Place, it would be located at 1300 Melrose Ave., on the corner of Sunset Street at the western edge of the town’s tailgate region.

St. Andrews Presbyterian Church has been at the location since the 1950s. Now the church is expanding and bought a 40-acre parcel of land at Melrose Avenue and Camp Cardinal Boulevard to make room for its growth.

If the University Heights zoning commission and later the city council approve design plans, a mixed-use development could be built in the church’s place. Jeff Maxwell, owner of Maxwell Development, is in the process of buying the property. The closing on the property is contingent on design approval from the city.

He would wait for the church to move to its location before starting construction on the 93-condominium development; he expects to break ground in 2012. During the past two years, Mr. Maxwell has developed a close relationship with the church, he said, and has slowly tried to present his development idea to the community.

“The real tax dollars are generated by a commercial tax base and the town doesn’t have much commercial,” he said.

He hosted three open houses recently, presenting design plans and answering residents’ questions and has tweaked the project according to many residents’ requests.

“The purpose was education; how can we make a decision if we don’t understand,” he said. “We can all drive through Melrose Avenue and recognize the uniqueness of it. It’s surrounded by Iowa City; it has a fantastic neighborhood sense amongst those who are residents there.”

The development would consist of two LEED-certified limestone buildings, one commercial and residential and the other residential. The two-story building closest to Melrose Avenue would be set back from the street to make room for a fountain and city square. The first floor would contain commercial businesses such as coffee shops and restaurants and would provide various community amenities such as a drop-off for books from the Iowa City Public Library.

The second floor would contain 32 high-end condominiums that would feature French doors and a slate roof. The rear building would be a staggered three to six story building with two levels of underground parking. It would contain about 60 condos. Prices have not been determined, but condos would range from studio size to 3,000-square-foot penthouses.

A dog park would be installed behind the rear building, as well as a bridge that would lead to the athletic club.

Many residents have expressed concern about increased traffic in the area, so Mr. Maxwell asked the Johnson County Council of Governments to conduct a traffic study on the property and present recommendations. The group’s suggestions were incorporated into the development design, such as adding a turn lane to Melrose Avenue and right-turn-only exits onto Melrose and Sunset. Mr. Maxwell said if the purchase agreement and design plan are approved, he would begin streetscape work immediately, adding bus lanes and improving the adjacent water main. He is hoping University Heights will approve the area for a tax-increment financing (TIF) district to help with the cost of the upgrades.

Many residents attended the zoning commission meeting with additional questions and concerns. Residents’ reluctance about the project is something Mr. Maxwell has grown accustomed to.

“With the meetings we’ve been at we’ve had pretty good practice of being beat up,” he said.
The commission decided to hold off on making a recommendation until its next meeting May 20. The commission has until June to make a decision on the design. CBJ