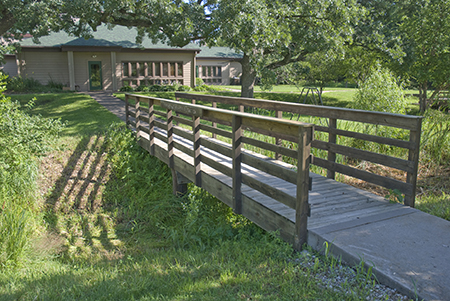 For the past 15 years, Prairiewoods has attempted to offer that hope through its signature annual event, Spirituality in the 21st Century.

This year’s conference, “Evolutionary Consciousness: Somewhere to Begin,” will be held May 1-2 at St. Pius X Church in Cedar Rapids. Facilitators will include Gail Worcelo, founder of Green Mountain Monastery, and musical artist Sara Thomsen.

Ms. Worcelo is “a hope-filled and dynamic invitational speaker who incorporates a lot of movement,” Ms. Weber said. “Participants will engage their hearts and minds, not just sit there and watch a screen.”

Ms. Thomsen, who has facilitated other Prairiewoods events, uses music “to celebrate the beauty of the earth.”

Prairiewoods Franciscan Spirituality Center was founded 20 years ago by the Franciscan Sisters of Perpetual Adoration to invite people into a deeper connection with spirituality and the earth, Ms. Weber said.

Along with an expansive and light-filled retreat conference center along Boyson Road in Hiawatha, Prairiewoods features 30 acres of prairie and 40 acres of woodlands. Regular programs focus on ecology, spirituality and holistic health.

The annual spirituality conference focuses on people collaborating as a community and connecting with the earth.

“Life is not a pyramid, it’s a circle,” Ms. Weber said. “Being on top is not so important anymore.”

Gazette Company CEO and President Chuck Peters first attended the conference two years ago when he helped bring in Peter Block, author of “Community: The Structure of Belonging,” to speak.

“After the flood in Cedar Rapids [in 2008], several of us in town studied his work,” Mr. Peters said.

The 2013 conference, “Engaging Community, Narrating Change,” also featured John McKnight, emeritus professor of education and social policy and co-director of the Asset-Based Community Development Institute at Northwestern University; and Walter Brueggemann, an Old Testament scholar and figure in progressive Christianity. That edition of the conference attracted more than 500 participants, including about 150 from outside the area.

“Those three people in one place was quite a draw,” Mr. Peters said.

Ms. Weber admits that some people are apprehensive at first with the participatory nature of the conference, which includes dialogue, singing and dancing.

“We see people come in timid,” she said. “When they first come in, they think, ‘What in the world?’ Then they become more relaxed as it progresses.”

The conference is not a prayer group, Mr. Peters noted, but rather concentrates on the power of small groups.

During one exercise he attended, participants were encouraged to sit with five other people they didn’t know in circle of six arranged around a platform. A speaker made a provocative statement from the stage and then participants discussed the topic within their group.

“It provides a universal perspective rather than a local view,” Mr. Peters said. “I have met people who have gone every year. It is an experience of authenticity and connection.”

Those attending this year’s conference will literally walk through a cocoon-like structure filled with pictures of evolving nature.

“We invite participants to come through the threshold and be transformed,” Ms. Weber said. “It’s a great coffeehouse with a lot of substance. It changes the way we think and act toward each other.”