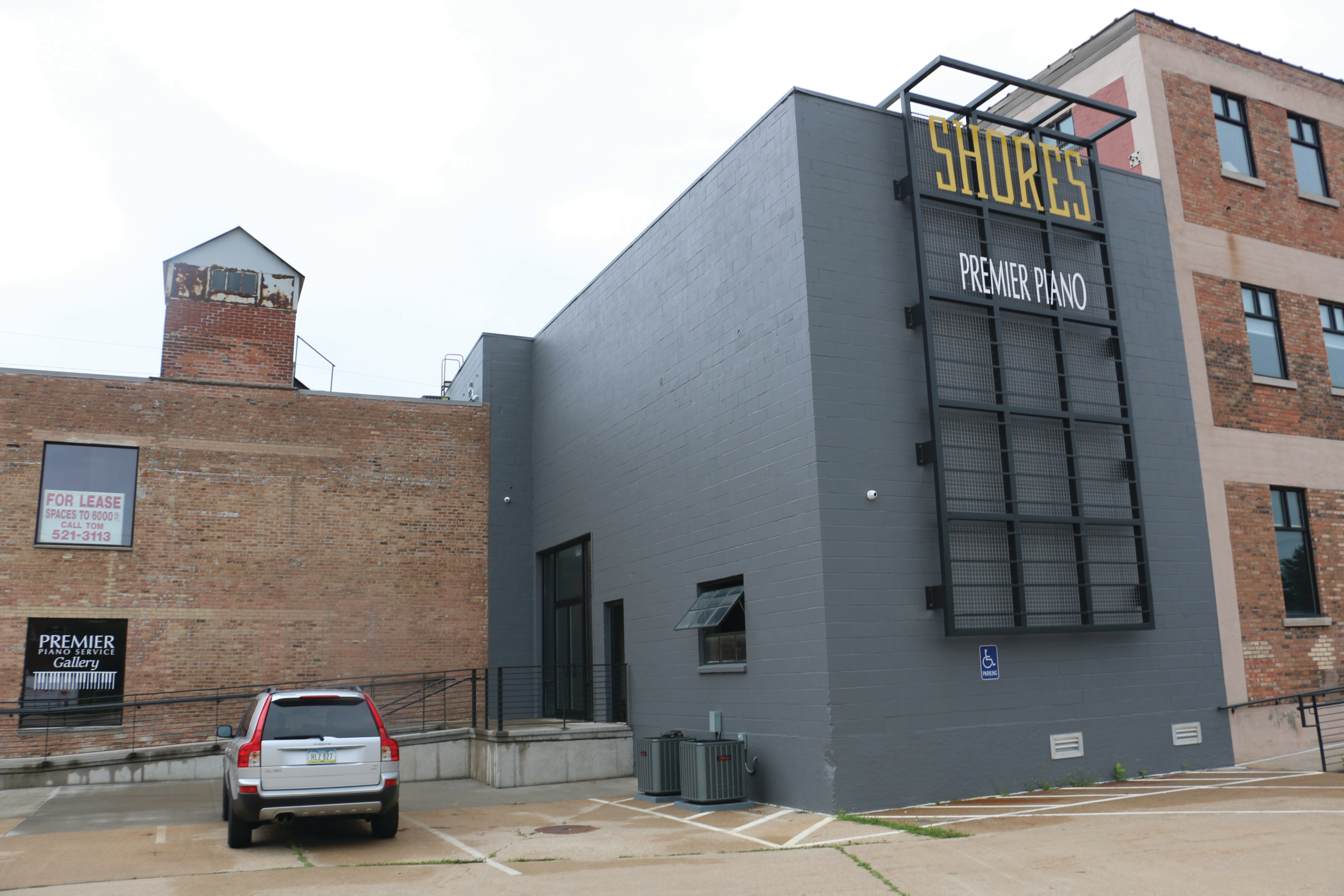 A new sign and new ADA-compliant entrance are part of recent improvements to the historic Shores Building in Cedar Rapids, which was built in three parts. A new performance center is planned in newer gray center section, which was built in 1969. PHOTO DAVE DEWITTE

CEDAR RAPIDS – The warehouse space at the back of the Shores Building was the last portion to be tackled in its owners’ long process of restoring the historic building in the budding College District.

The theater troupe’s leaders liked the industrial “back-street” look of the space and hoped to see it emphasized in renovations instead of drywalled over. The 50,000-square-foot building’s soaring ceiling heights and a mezzanine area made the idea of repurposing it as a theater even more appealing.

Mr. Elliott had long worked in the Shores Building as the executive director of the East Central Iowa Council of Governments – a position from which he recently retired – and knew the surrounding College District could use a new draw.

The project known as the Shores Performance Center was moved to the front burner by Mr. Erger and his business partners, Mike Pitzer and Devonna Wood.

Plans call for a highly flexible theater space with a movable stage and flexible seating. A tiered seating area planned on the ground floor will have capacity for a maximum of 250, and additional seating will be added on a mezzanine area.

“The idea is that the space will be versatile, like a black box theater,” Mr. Erger said. “The stage can be located in three different spots.”

Theater patrons will be ticketed in the Shores Building’s lobby, then can take the elevator to the basement for a pre-performance cocktail at the bar of Shores Event Center. Guests will enter the theater through a display area Mr. Erger calls the ‘Hall of Knobs.”

Eventually, plans call for demolishing a metal garage space at the rear of the building and constructing an outdoor balcony area overlooking the CEMAR Trail.

SPT Theatre is a professional theater company founded in the early 2000s by four friends who liked the sound of their vocal performance in a Theatre Cedar Rapids production.

While it was a small start, “we thought, “OK, this just might fly,” Ms. Pini recalled.

Finding spaces for a full-blown production quickly became a challenge when the Flood of 2008 shuttered all the downtown theater venues, and they ended up leasing space at the Cedar Rapids Museum of Art.

Over the years, SPT has brought together area writers, actors and musicians for original productions, including A Modern Salon at Brucemore and Tales from the Writer’s Room at CSPS.

Tales from the Writer’s Room, a series beginning Sept. 22 and 23 in the renovated space, is a comic production reminiscent of Saturday Night Live. For the productions, Ms. Pini said the Shores Building will offer the group more on-stage rehearsal time and more flexibility in choosing performance dates than it previously had. It will also allow for three-day performance runs instead of two-day runs.

Plans for the Shores Performance Center were reported by the CBJ just days after entrepreneurs Steve Shriver and Eric Engelmann announced plans to open the Olympic South Side Theatre, an events and performance center, in a renovated social hall at the Brewhemia building at 1202 Third St. SE.

Mr. Erger said the Olympic South Side Theatre’s business model, based primarily on hosting events and occasional performances, makes better business sense from a financial perspective. However, unlike the vibrant NewBo district where the Olympic South Side is located, the College District is still trying to get on the map as an entertainment hub, and needs a draw.

SPT Theatre understands that need, Ms. Pini said, and wants to be that spark.

“We’re hoping this will be the same kind of revitalization (as NewBo),” Ms. Pini said. “We’re hoping we will help bring restaurants, bars and other businesses to the College District.”

Mr. Erger was on the committee that oversaw the development of a new College District Master Plan for a large area of northeast Cedar Rapids, connecting Coe College, Mount Mercy University and the Moundview Neighborhood. He said development of the area has been lagging because so much of the rambling Iowa Manufacturing factory complex that was closed down by its latest owner, Terex Corp., has just been sitting there.

Recently, an offshoot of Ahman Companies, The Hub LLC, acquired the Terex main building and some parking areas around it. With plans to redevelop the property a stone’s throw from the Shores Building, Mr. Erger believes there will soon be people interested in relocating to and investing in the district.

The Shores Building expects to attract some of them. Recently, the Cabinet Studio moved its shop operations and warehousing offsite, and the owners have begun renovating the vacated space for lease to tenants. One of the more recent additions is Premiere Piano Services, a company that restores and sells Steinway pianos.

A new entrance and sign were crafted for the two-story, 1917-era section of the building where Premiere Piano is located. About 4,000 square feet of space in the building remains, including one large space that could accommodate a coffeehouse or restaurant.

Once the theater is up and running, Mr. Erger is hopeful that at least one other theater group and other performance arts organizations will book it for their productions.

One of the most remarkable things about the Shores Building is its construction, utilizing a concrete flat-slab support system known as the Turner Cap system. Concrete floors more than a foot thick are supported by massive concrete columns with concrete caps at the ceiling level like parasol mushrooms.

The Shores Building was named after the Shores-Mueller catalog company that made and sold products from it in the early 1900s. Its designation on the National Register of Historic Places is expected later this year. While preserving the building’s general appearance and structure, Mr. Erger said the building has been updated with self-dimming LED lighting and other improvements using historic preservation tax credits to make it a more desirable location for professional offices.