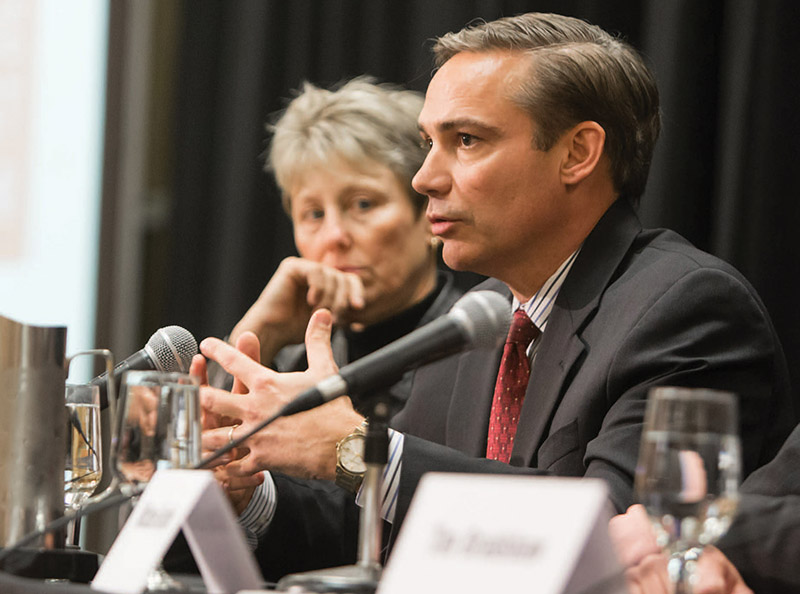 Recent public filings reveal what Rockwell Collins leaders are being told about the $30 billion deal to sell their company to United Technologies Corp., and what’s likely to play out in the months ahead.

Customers will be skeptical, employees will be anxious and the corporate headquarters operation in Cedar Rapids could very well be going away, company chairman, president and CEO Kelly Ortberg told a Sept. 12 Rockwell Collins leadership meeting. But those who are shareholders will benefit, and in the final analysis, he said, the organization will be more competitive than before.

Manufacturing conglomerate United Technologies Corp. (UTC) of Farmington, Connecticut, announced a deal with Rockwell Collins on Sept. 5, under which Rockwell will be merged into UTC’s Aerospace Systems (UTAS) unit based in Charlotte, North Carolina. The resulting entity will be called Collins Aerospace Systems and led by Mr. Ortberg.

Here’s an overview of Mr. Ortberg’s most interesting remarks from a transcript of that Sept. 12 meeting filed with the Securities & Exchange Commission:

Why he wasn’t thinking sale originally:

“I thought once we got to about $8 billion [in revenue] we were pretty immune from being taken over. Only a few companies in the world would have the capacity to do that. United Technologies, obviously, is one. But now you look and we’re a much larger pro-forma company: $23 billion in revenue and roughly 70,000 employees worldwide.”

On the human impact to Rockwell Collins:

“Look, there’s going to be some impact to employees. There’s no question about that. I talked to [UTC chairman, president and CEO] Greg Hayes yesterday. He was very much focused on, ‘Look, there may be some jobs that get eliminated, but we bought Rockwell Collins because of the talented employees that we have.’ We have a very large corporation. So even if jobs get displaced, we should be looking really hard at how we can deploy those folks into new roles within the organization.

“I know that’s going to create some anxiety for certain people, depending on what area you work in. For the most part, I think if you think about your production operations, your engineering development work, I don’t see really any significant impact there for those folks, because there’s not a lot of overlap.”

On the HQ location for the new Collins Aerospace unit:

On the reaction of Rockwell customers:

“I have never believed in leveraging customers. We’ll be big to allow us to provide more value, and that’s not something that allows us to leverage customers. I just think that’s a short-sighted strategy, penny-wise and pound foolish.”

“One of the things that they [the board of directors] have to look at is the overall price and does that price turn out to be better than the value of running our company independently. This chart actually shows you that premium in terms of the EBITDA multiple. EBITDA is earnings before interest, taxes, depreciation and amortization … and you can see these are all the largest transactions that have been done in the aerospace and defense [industry]. Lockheed Martin bought Sikorsky. They paid 11.1 times EBITDA. We bought B/E [Aerospace] … for 13.6 times EBITDA. The amount United Technologies paid for Rockwell Collins: 16 times EBITDA – really a record multiple in aerospace and defense.

“We created a lot of value for the shareholders. … If you look, just before we did the B/E transaction, the day before we announced it, we were trading in the low 80s. So at $140 a share just in that short period of time, you can see a very, very significant premium.”