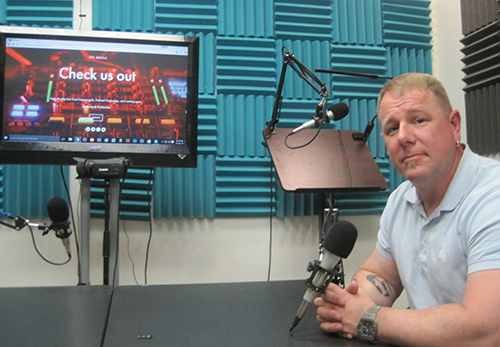 Symon Sanborn of TPS Media poses in a podcasting studio at Vault Co-Working in Cedar Rapids. Businesses are experimenting with podcasting as way to connect with audiences and customers.

Cedar Valley Outfitters owner Ernie Traugh has become a big follower of podcasts about things like customer service, so when he began looking for ways to engage his prospective clientele, a podcast was at the top of his list.

“It’s three dudes having a conversation about what we see going on in the gun world,” said Mr. Traugh, a provider of firearms, supplies and training based in Marion. “And that probably has very little to do with what most people think about guns from what they see and hear in the media.”

Producing a podcast is also on David Chase’s plate this year as marketing manager at Crystal Group in Hiawatha.

The company has produced 59 videos in which its executive vice president of engineering, Jim Shaw, explains how the Crystal Group builds its tough, ruggedized computers. Available on Crystal Group website, the “Jim on Engineering” videos have developed a loyal following.

None of Crystal Group’s competitors are podcasting, however, making it an opportunity to differentiate the company for its in-depth knowledge and expertise in high-reliability computing. Podcasting is often mentioned as one of the year’s hot trends in marketing journals.

“It’s become the high water mark of things we should be doing,” Mr. Chase said.

Podcasting is a funny-sounding term for an extremely simple concept: producing an audio file and hosting it on a website for download, either free or for a small price, so that the user can listen to it at their convenience on their computer, tablet, smartphone or MP3 player.

As a way to make a quick sale, podcasting probably isn’t the easy answer.

“If you just have a podcast and talk about why your product or service is great, I don’t think many people will be interested,” said Geoff Wood, producer of the Minimum Required Podcast, which features Mr. Wood and Des Moines Register technology writer Matt Patane discussing Iowa’s startup scene.

Mr. Wood thinks downloaders listen for honesty and authenticity, and recommends covering topics that affect an overall industry, rather than focusing on why the podcaster thinks his or her offerings are great.

That opinion is widely shared: Most people simply won’t download a podcast that sounds like a commercial. They can hear those on just about any other medium with audio.

“Ninety-five percent of the podcasts I listen to aren’t trying to sell anything,” Mr. Traugh said. He believes the bigger value proposition may be to share a larger message – in his case, that gun owners should be and usually are responsible.

“I’m known as the mean, arrogant guy for telling it the way it is,” he said.

(Bank)rolling tape
Just how to get a podcast going is the question for many.

Crystal Group plans to produce its own podcast in-house. Mr. Chase estimates it will cost $300-$1,000 for equipment such as microphones, a mixer, headphones and a USB audio interface. He is contemplating using Audacity, a freeware sound-mixing package.

Producing a basic podcast is within the reach of just about anyone with a Internet-connected computer, a few hundred dollars and the ability to follow some technical instructions, according to Mr. Wood, who’s produced several podcasts since 2010.

“It was easier to start than I thought it would be, but hard to build an audience,” Mr. Wood said.

He engages his audience before each weekly podcast by using Facebook to ask his fans what questions they would like to hear answered during the week’s show.

There is plenty of advice on how to produce a podcast available online. There’s even the Podcasters Studio (http://thepodcastersstudio.com/about/), which explains how to podcast by using podcasts.

Working out the format and the content may be the most challenging part after getting over the initial hump of building a setup and learning to use it.

Mr. Wood and Mr. Patane settled on as semi-fixed format, with Mr. Patane highlighting some of the stories he’s working on or companies he’s visited, and Mr. Wood featuring a few stories of Iowa entrepreneurs each week. Minimum Required Podcast has a standard introduction and conclusion, which includes a brief appeal for downloaders to assist financially through patreon.com, a Kickstarter-like fundraising service that allows subscribers to donate per episode produced. The funds cover expenses, which are mainly the cost of a subscription for hosting the podcast on libsyn.com.

Minimum Viable Podcast averages about 200 downloads a week, and about 30 of the downloaders provide financial support through patreon.com. For some, it’s only $1 per podcast, but Mr. Wood doesn’t mind.

“Any time we get a new patron [on patreon.com], that really shows people are listening,” Mr. Wood said.

TPS founders Symon Sanborn and Shane Skala have been producing their own Primal Scream long-format podcast for about three years, most of that time at the Vault Co-Working space in the Geonetric building. They have learned a lot about the potential of podcasting by hosting the program’s casual two- or three-hour conversations with local artists, athletes, musicians or celebrities.

The appeal includes the freedom to speak honestly and at length in an uncensored format, Mr. Sanborn and Mr. Skala say. But for a business, they provide the opportunity to connect with an audience and show the host’s knowledge and passion in their area of expertise.

“You can’t buy three years of production experience,” Mr. Skala says. “The customer comes in, records it, and two or three days later they have a professional sounding podcast on our website that they can link to.”

A slightly rough sound is fine with Mr. Wood, whose Minimum Required Podcast sometimes has police sirens and train whistles that aren’t edited out.

“Aaron Horn [IT director at Iowa Interstate Railroad] always comments on the train sounds,” Mr. Wood said. “He says he likes it, because it means they’re making money.”