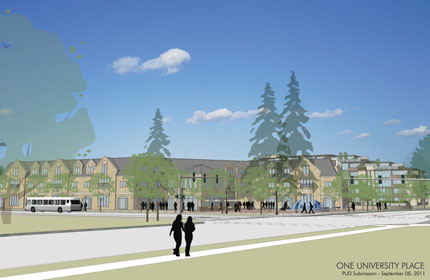 Several financial projections were made at the University Heights City Council meeting Sept. 13 regarding a proposed development.

Some of those numbers need to be recalculated and reexamined, however. The city hired two financial firms, Piper Jaffray and Terry, Lockridge & Dunn, to provide third-party assessments of the financial impact and validity of One University Place.

One University Place is a proposed mixed-use condominium and commercial development planned for 1300 Melrose Ave., where St. Andrew Presbyterian Church is located. The lot is a few blocks west of Kinnick Stadium. If the development moves forward, it would be complete in 2016, with condos averaging $500,000-$700,000.

It has been the subject of nearly every city council meeting – and election – for the past three years. The controversial project has split the town, with some opposing the project’s high density and others in favor of the potential increase in property tax value and revenue.

The project has progressed through many hurdles during the past few years, but hit a rough patch once again last week, during possibly one of the most important junctures in the development’s progress.

Two things happened. The draft of the tax increment financing (TIF) agreement proposal, which was promised to councilors by Sept. 9, arrived to them two hours before the Sept. 13 council meeting. That means when councilors walked into the meeting, most had not reviewed the actual document. Approval of the agreement was an item on the council’s agenda.

John Danos, a TIF attorney from Des Moines who is advising the city on the agreement, wrote the proposed agreement with the development team. He attended the council meeting last week via telephone and said the lateness of the report was his fault and apologized to the council. He walked the council through the report anyway and answered a handful of preliminary questions.

Second, the question of the project’s financial validity and its affect on the city budget could not be answered. On the council’s agenda was a financial analysis presentation by Tim Terry, founder of Terry, Lockridge & Dunn. He said he could not present an analysis of the development because the development team would not release its financial data.

“It’s like double secret probation,” Mr. Terry said, referencing the movie Animal House. “It brings us to a dead end in the evaluation of the development.”

Dennis Craven, the financial advisor for the development, said it was a professional standard in the accounting field to not release data to anyone not listed as a user in the development proposal. The only user listed is Jeff Maxwell, the developer.

Councilors and the audience questioned how the city could enter into a financial agreement with the developer based on financial conclusions but without reviewing the basis for those conclusions.

Mr. Danos said the city does not need to consider the financial calculations of the project as a risk, that the city’s obligation will not be met until the project is complete. There are several items in the TIF agreement that protect the city from financial and construction uncertainties.

Mike Mesch of Terry, Lockridge & Dunn presented a financial projection of the city budget 10 years into the future, based on the past 10 years of expenses, revenue and growth.

While he told the council that the city will remain financial viable whether or not the development occurs, councilors directed him to run the numbers again.
His report assumed a 3.8 percent growth in city tax revenue without the project. The council said real estate projects coming online during the past several years have skewed the city’s average growth to 3.8 percent. They asked him to run the report at a projected 1 percent growth rate. That report will more accurately reflect the city’s expense/revenue ratio, councilors said.

Johnson County Assessor Bill Greazel also made a presentation at the meeting. He was asked to speculate on the future property value of the development and its affect on surrounding properties in the area. He said the project is so unlike anything else in the county, he could not speculate.

“If you put up a condo in North Liberty, I could tell you what is going to happen; but with this, there is no template for it,” Mr. Greazel said. “I don’t know how many people want a $500,000-$700,000 condo or what the appetite for commercial properties is in University Heights. There are a lot of vacancies in Coralville and the rest of the county.”

He did say that the project could have a negative impact on adjacent properties if the owners found the development unappealing. There is not much real estate activity in University Heights, except for homes converted into student rentals, he said and speculated that the condos would not likely compete with the single-family house market.

The Sept. 13 meeting lasted more than six hours. An August work session focused on the development lasted more than five hours. The council meets monthly but plans to schedule a special formal meeting for either Sept. 27 or Oct. 4 to further discuss One University Place, as well as vote on other items that were tabled last week.

The pace of approvals and length of meetings has led many in the community to accuse the council of trying to artificially hasten the development, in order to meet the developer’s schedule or approve it before the November elections.

Councilor Mike Haverkamp said the council is not working to meet deadlines set by the developer, the election cycle or other factors. After discussing it for three years, many councilors are ready to move forward on the development, he said.

If and when the development passes the city’s requirements for a planned-unit development, it will need to be approved by St. Andrew Presbyterian Church. The church has purchased land on Camp Cardinal Boulevard for a larger building. Whether the church moves, however, will be decided by the Presbytery of East Iowa and the local congregation.

Many residents in attendance at last week’s council meeting asked the council to defer a final decision about the TIF proposal until after the November election. On Nov. 8, University Heights residents will vote to fill five councilor and the mayor positions.   CBJ