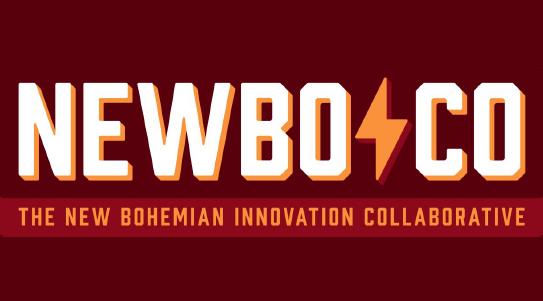 The nonprofit umbrella organization of the Iowa Startup Accelerator now has a new name to carry its collaborative and innovative spirit around the globe.

The New Bohemian Innovation Collaborative was launched in February after a project to sharpen the rapidly evolving organization’s brand and mission statement.

“We had been doing a lot of different things, but we never really had a name that pulled it all together,” said David Tominsky, director of programs for the organization, in announcing the brand at 1 Million Cups on Feb. 10.

The name and the branding initiative that surrounds it are intended to refine the organization’s role in Iowa’s entrepreneurial ecosystem, and to redefine terms such as “Bohemian” and “New Bohemian,” Mr. Tominsky said. They aim to encourage creative entrepreneurs around the world to identify as New Bohemians, and to understand the organization’s role in bringing innovations from Iowa to a global marketplace.

A need for branding became apparent as the programs and organizations operating under the Iowa Startup Accelerator’s umbrella grew. There was Vault Coworking, a collaborative workspace that began in 2011, the Imagination Iowa STEM education initiative for preschoolers to 12th graders that began in 2014, and the ISA itself, which also launched in 2014.

Mr. Tominsky said the organization supports or partners with a growing list of other programs, including the new Iowa Girls Code Camp, Coder Dojo, summer camps and community programs like 1 Million Cups and Startup Weekend. It is also taking on a collaborative role in innovation initiatives within Iowa corporations.

In short, the group is looking to fill the gaps in the area’s entrepreneurial and creative ecosystem, Mr. Tominsky said.

The visioning that led to New Bohemia Innovation Collaborative came about during a daylong board retreat at the Bottleworks condominiums in Cedar Rapids in September 2015.

After introducing the name, logo and mission at a small stakeholder gathering on Feb. 9, it was shared with the larger community at the 1 Million Cups event.

The organization’s mission statement is to “Accelerate world-changing ideas from Iowa.”

“It says we’re going fast – accelerate. We’re world-changing,” Ms. West, a founding board member of NewBoCo, explained at 1 Million Cups. “We want to make a global impact, and we’re going to do it from here.”

The mission also identifies the organization’s goal to support the entrepreneurial ecosystem throughout the state, not just in the Corridor, and to support entrepreneurs from other places who come here to collaborate and innovate.

“A win for any community around the state is a win for us,” Ms. West said.

Residents of Cedar Rapids usually identify New Bohemia with the Czech and Slovak heritage of early residents in the city’s New Bohemia Arts and Entertainment District. In announcing the new name and branding, the board members introduced a more universal definition of New Bohemians as “all creative people driven by creativity, innovation and making things happen with an eye to making change.”

Mr. Tominsky hopes the word “collaborative” isn’t lost in the mix. He said the Iowa Startup Accelerator’s stakeholders have shared ideas, contacts and resources with other members of the entrepreneurial community in a belief that supporting each other builds abundance for all.

“Collaborative is absolutely one of the most important things,” Mr. Tominsky said. “We are envied here because of the way our organizations are working together for the community.”