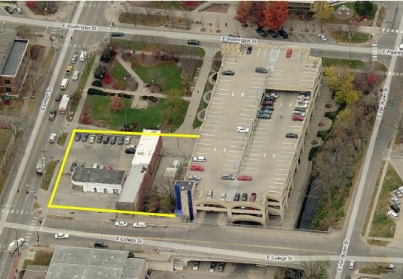 Note: In a letter to its shareholders on Wednesday, New Pioneer Co-op announced plans to construct a new natural foods grocery store at the northeast corner of Gilbert and College streets in Iowa City.

The site, formerly a bus station, is owned by the city. City officials recently decided to sell the unused land and have submitted a request for proposals for development of the site. New Pioneer plans to submit a proposal. New Pioneer Co-op members will vote on whether to approve the land purchase.

If approved, New Pioneer would construct a multi-story, multi-use building on the site. It would house the co-op’s administrative offices, which are now located in the Tower Place Parking Ramp on Iowa Avenue.

What follows is a portion of a story about a successful co-op in Minneapolis that will serve as a model for New Pioneer’s new store. The full story will appear in the next CBJ Quarterly magazine, which will be mailed to Corridor Business Journal subscribers the week of Feb. 21. It will be available for purchase as well. Visit www.CorridorBusiness.com for details.

With a site now selected for its new downtown Iowa City store, New Pioneer Co-op plans to model its new store after the Seward Co-op in Minneapolis.

Seward is a gold LEED-certified building using technologies such as solar tubes and daylight harvesting that takes natural sunlight and funnels it to spots above the cash registers, so workers are not standing under florescent lights all day. In fact, 75 percent of work areas and the sales floor are exposed to natural sunlight. S

eward is a two-story, single-use building, with a striking exterior, differing from the initial design plans for the next New Pioneer Co-op.

“I don’t know that our exterior will be as bold as theirs, but I still think it will be exciting,” said Sarah Walz, president of New Pioneer’s board of directors.

Before Seward moved into its new building in 2009, it was operating out of a 13,000-square-foot space, not too dissimilar from New Pioneer. Seward’s new space is 25,000 square feet.

“What we would be doing would be very similar to Seward in terms of technology, layout,” said Matt Hartz, New Pioneer’s general manager, who added that the mission and prices at New Pioneer will not change with a new building. “We long have needed an area for a seating area and community classroom, so those are elements we would be incorporating into a new store.”

At Seward, the second floor includes the community classroom and administrative offices. When Seward opened its new store, it was able to add a meat department, expand its bulk foods, health and beauty, grab-and-go and other departments.

“It’s allowed us to have all of our offices on-site and in one location,” said Tom Vogel, Seward’s marketing manager. “In the previous store, we had to rent an annex and the administrative staff was off-site, which wasn’t always the best thing. We’re now back under one roof. It’s allowed us to build a kitchen classroom on our second floor and that’s a big feature. We’re able to have cooking classes, demonstrations, as well as meetings in there. We’ve even started showing movies in there, too. That was something we always wanted to do but just didn’t have the space.”

The new Seward store also has considerably more storage space and room for refrigerators, freezers and coolers. The expansion in products and services has benefitted Seward.

“Our sales have a little more than doubled. Our final year in our old store, in 2008, we were at $11.9 million in sales. Last year, fiscal year 2011, we posted $27.4 million in sales,” he said. “Sales have definitely gone up and actually a lot more than we thought they would. We conservatively planned for modest growth, but it’s been significant.”

New Pioneer plans to use some of the green technology incorporated into the new Seward building. Seward’s white roof helps defray heating costs, solar panels reduce energy consumption, light monitors adjust the use of florescent lights, bicycle racks and a repair station are available outside, and 90 percent of rainwater runoff is diverted to the store’s gardens.

“One of the hard things about change is, we know what we have and we know people like it and feel connected to it and feel passionate about it,” Ms. Walz said. “And then when you talk about change, it’s really hard because it’s like, ‘Well, what is it going to look like?’ so that’s one of the hard things. It’s good to go out and see other co-ops and see what else is out there.”