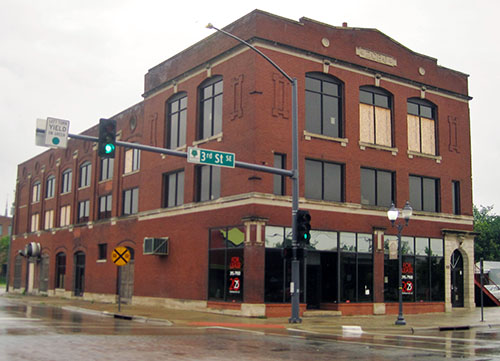 The Chrome Horse chapter is over at the 107-year-old ZCBJ building, one of the architectural pillars of Cedar Rapids’ New Bohemia District, while a new chapter is about to begin.

Standing just south of the NewBo City Market on the 1200 block of Third Street SE, the ZCBJ building is best known today for its last tenant, the Chrome Horse Saloon. It was originally the home of the Western Fraternal Life Association, or Zapadni Ceska Bratrska Jednota, a fraternal benefit association serving families of Czech ancestry, which moved more than 50 years ago to 1900 First Ave. NE.

A fire in July 2014 caused extensive damage to the Chrome Horse, which never reopened. Instead, the owners sold the building to U.S. First Holdings LLC, a real estate investment company associated with local telecommunications entrepreneur Dennis Henderson.  It was then sold in May to 2025 Development, a real estate investment company that includes Mr. Henderson, Joe Ahmann of Ahmann Companies and others.

Plans call for restoring and renovating the fire-damaged building, and potentially developing other areas of the large site, which extends east from Third Street SE to Fourth Street SE, according to Chad Pelley, business development manager at Ahmann Companies.

The building will be renamed “The National,” Mr. Pelley said, and will be renovated for multiple tenants instead the single-tenant configuration leased to the Chrome Horse. The building could potentially house two retail businesses, a restaurant and office tenants, he said.

It appears that leasing the 25,000-square-foot building will not be a problem.

“We’ve had so much tenant interest it’s unreal,” Mr. Pelley said, attributing much of that to the development momentum in the NewBo area, and the building’s prime location near the NewBo City Market and other attractions.

No leasing deals have yet been announced, and Mr. Pelley said 2025 Development was still working on a plan to best utilize space inside the building and on the site.

The Chrome Horse was a magnet for the nascent NewBo District following its establishment in February 2004. The motorcycle-themed bar managed to attract bikers and non-bikers alike with both indoor and outdoor live music events, pool tables and a large draft beer selection. During special music events, the Chrome Horse sometimes featured multiple performing acts and drew hundreds of patrons.

Jennifer Pruden, executive director of the Czech Village/New Bohemia Main Street District, said that while the Chrome Horse will be missed, the plans she’s heard from 2025 Development could make the building a bigger destination than it was before.

One reason for Ms. Pruden’s optimism is that the new owners plan to retain an upstairs performance space in the ZCBJ building with tiered seating, and are seeking a tenant that will book major regional and national acts that could draw larger crowds.

Plans to reconfigure the building into multiple leasable spaces could also make the building a bigger draw by keeping overhead lower for each tenant, and creating a variety of business destinations instead of one, she added.

“I think it syncs in with what we were looking for when we created our revitalization strategy for the area,” Ms. Pruden said. “We’ve become strong in our district for being known for our restaurant, retail and entertainment opportunities.”

The early use of the building was in fact a combination of retail and office use, according to city historian Mark Stoffer Hunter. He said ZCBJ used only part of the main floor, dedicating two spaces to retail shops, and used the upstairs ballroom area as a sort of Czech community center.

The ZCBJ building is one of the main historic architectural anchors of the NewBo district, Mr. Hunter said, along with the Village Bank building across the street and the older CSPS Hall on Third Street. The Czech School building on nearby Second Street, which currently serves as a headquarters for Winifred’s Catering, could someday be another, if renovated.

All of the buildings tie into the early Czech heritage of the area, Mr. Hunter said. An installation of early sidewalk advertisements salvaged in the streetscaping of the area in front of the ZCBJ building includes the names of early Czech businesses that occupied the ZCBFJ hall and other storefronts.

Mark Dukes, a Cedar Rapids sports broadcaster who managed the Chrome Horse for much of its life, said the old Chrome Horse owners may have been reluctant to invest in another restoration of the building after the 2014 fire. The building had already undergone a prolonged and costly process to restore it after the flood of 2008.

The Cedar Rapids Fire Department determined that the fire that damaged the Chrome Horse was due to spontaneous combustion in a pile of rags.