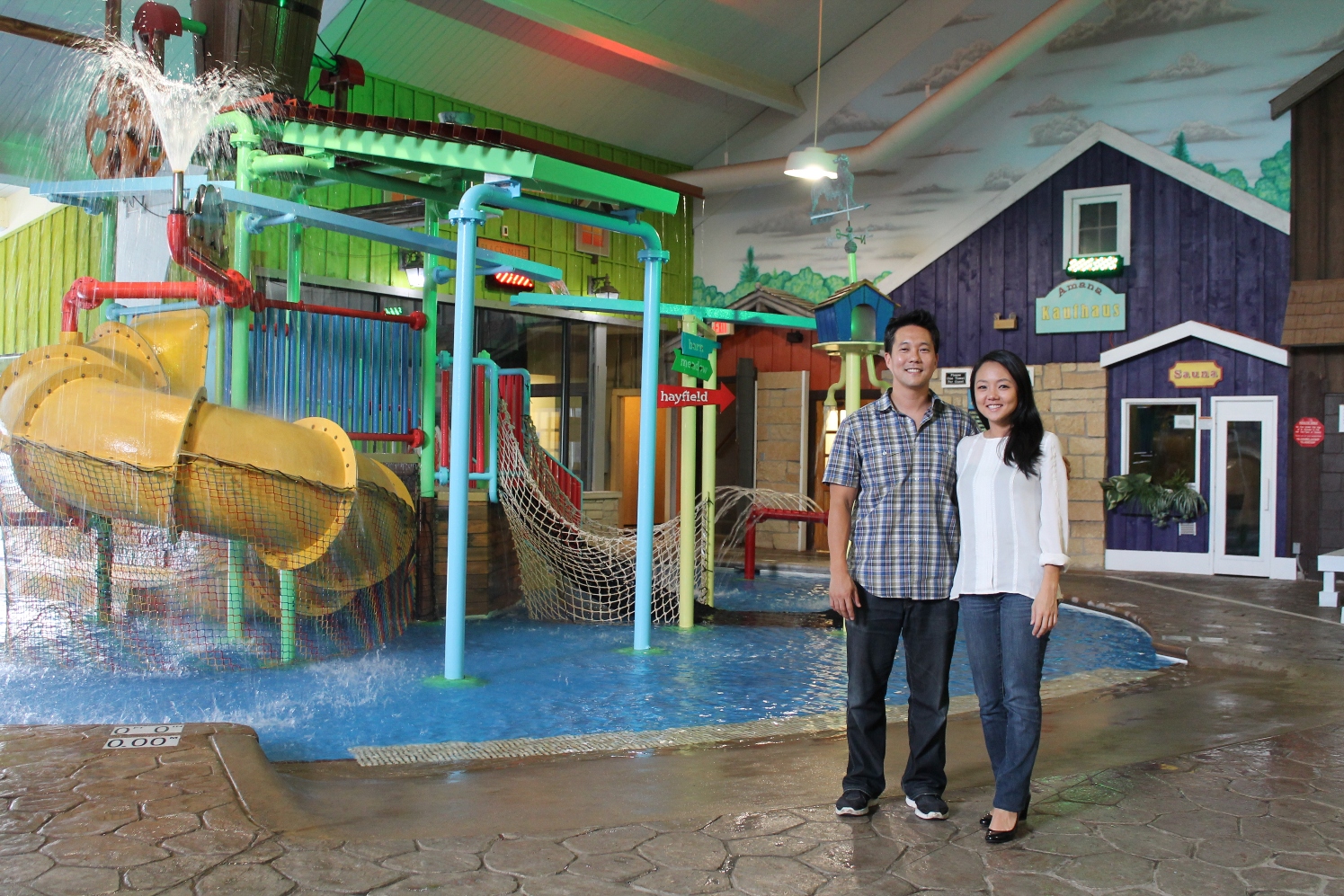 WILLIAMSBURG—Yule and Sae Park were well aware of the struggles the businesses at Interstate 80, Exit 225 have faced in the past couple of years.

But the young couple from Pasadena, Calif., are confident things will turn around at the once-bustling area. Several weeks ago, they closed on the properties on the west side of the exit, formerly known as Little Amana.

“It will take time to bring it all back, but we are confident we can do it,” Ms. Park said.

They purchased the properties from former owner Young Kim in a sale included the Ramada Inn (formerly Clarion Inn), which houses the Wasserbahn Waterpark; Casey’s General Store; the Maid Rite restaurant building; a vacant freestanding building; and a strip mall that houses the Village Winery and several vacant spaces.

“We were fully aware of the problems of the waterpark, hotel and area in general, but we saw a lot of unused potential,” Ms. Park said.

Their first order of business was reopening the waterpark, which was closed by the Iowa Department of Public Health last September due to a long list of health code violations, including lack of chlorine, broken equipment and insufficient water testing.

The closure came after a series of visits by Johnson County Public Health inspectors who were contracted by the state to inspect the waterpark after a March 2013 complaint from a woman who claimed her husband developed an open sore on his arm after swimming there.

“She was concerned that the pool did not smell like chlorine at the time,” the complaint stated. “She also said you could not see the sides or the bottom of the pool. She stated it had a murky feel and the bottom felt dirty/sandy.”

When Mr. Kim withdrew an appeal of a June 2013 closure order from the Iowa Department of Public Health, the waterpark closed indefinitely.

Ms. Park moved to Iowa several months ago to address the waterpark issues while her husband and 3-year-old daughter stayed in California. After repairs were made, equipment updated and a third-party pool management company hired, the Iowa Department of Public Health gave the green light for the waterpark to reopen in late July.

The Parks, who have both become certified pool operators, realize the public may still be squeamish about visiting the waterpark which has had so many well-publicized problems.

“People will hesitate and take their time and I don’t blame them,” Mr. Park said.

They hope to have a weekend-long grand opening soon to show the public what has been updated.

They acknowledge that many of the waterpark’s issues were the result of mismanagement, but attribute a large part of that mismanagement to Mr. Kim’s serious health problems over the past few years. Mr. Kim recently had a heart transplant and is recovering, Ms. Park said.

Now that the waterpark has reopened, the Parks plan to focus on the 43-year-old hotel, which changed affiliation from a Clarion Inn to a Ramada earlier this spring. While many of the 144 guest rooms were renovated in 2010, updates are needed throughout the hotel, including in Seven Villages restaurant, and its conference and banquet rooms.

“Over the next year we will be working on little things,” Mr. Park said. “It’s like owning a big home.”

The vacant properties near the hotel are for rent. Mr. Park would like to see family-oriented businesses in the space, but is testing the market.

While this is the Parks’ first time running a hotel – and working together – Ms. Park’s family has more than 20 years experience owning and operating hotels throughout the country. Her father, who lives in Wyoming, recommended the couple purchase the complex in Iowa County after seeing it for sale.

The couple and their daughter recently moved to Iowa City.

“What better place than the Midwest for our daughter to grow up,” Mr. Park said.

The Parks have received support from the staff, other business owners and nearby communities.

“People just had so much history here,” Ms. Park said. “The staff members are so loyal and people from the community want it to come back.”

The other piece of the Exit 225 puzzle – the east side – is also receiving a facelift after several years of decline.

Earlier this summer, Coralville-based Petroleum Services Company LLC, a division of River Products Co., bought four properties on the east side of the exit: the Amoco gas station, the strip mall, the former Econo Lodge motel and the Ox Yoke Interstate restaurant, which closed at the beginning of the year.

Petroleum Services closed on the restaurant, strip mall and hotel in June and the gas station in late July after weather delayed tank removal and mitigation

D.W. Zinser Company, of Walford, began demolition a few weeks ago. Once it is completed, River Products’ recycle division will salvage the broken concrete and asphalt.

“That will be the extent of work to be done in 2014,” said Tom Scott, president and CEO of RPC Holdings and River Products Co. “Next year, we will take a breath and decide what we are going to do. There will be no construction until late 2015 or 2016.”

The company also acquired Cedar Rapids-based Hawkeye Convenience Stores while in negotiations for the Exit 225 properties. That transaction closed on June 30.

“Because of that, this (Exit 225 development) will be put on the backburner for about a year,” Mr. Scott said. “We think it has potential whether we develop it or somebody else does.”

If Petroleum Services decides to develop the area itself, Mr. Scott said, it will be similar to the Center Point Travel Plaza along Interstate 380, which the company also owns.

The travel plaza, built in 2005, has more than 100 parking spaces for tractor/trailers, buses and RVs and enough parking spaces for more than 90 vehicles. It offers seven diesel fueling lanes and 16 fueling stations for automobiles and pickups. The plaza also has a convenience store, two fast food restaurants and driver amenities, including showers and laundry facilities.

“People of Iowa County have indicated there is interest,” Mr. Scott said.

Whatever Petroleum Services decides to do with the property, many Iowa County residents are pleased to see action on both sides of the interchange.

Mary Ellen Sandersfeld, Amana, who opened Colony Village restaurant in 1967 with her late husband, Russ, has seen both the heyday and decline of the area.

Colony Village, which moved into its current location on the hill south of the east-side properties in 1976, has been a mainstay through the area’s ups and downs.

During the thriving years, all of the hotels and restaurants at the interchange were consistently filled, especially during Hawkeye football game weekends in Iowa City, which is just a short 15-minute drive east along I-80.

While Ms. Sandersfeld was a little sad to see the buildings torn down – including the original site of the Colony Village – she realizes that “times change.”

Joyce Lortz, an employee at Village Winery in the strip mall owned by the Parks, has been impressed with the couple’s ambition.

“I think they will turn it around,” she said.