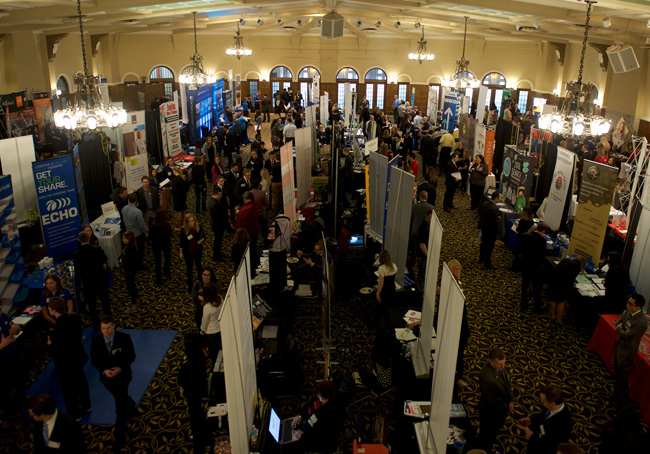 Job fairs at the University of Iowa, like this one last spring, are a popular destination for employers in the Corridor. The UI is now leading other employers on a regional recruiting effort that focuses on dual-income couples.  PHOTO NICOLE OOI

Several Corridor employers have teamed up in an effort to find qualified hires, and in doing so, are paying extra attention to an historically overlooked party: the hire’s spouse.

The regional division of the Higher Education Recruitment Consortium, or HERC, launched in September with 18 higher education and community employers on board. Led by the University of Iowa, those organizations now have access to the HERC job portal, which lists more than 30,000 openings at more than 700 colleges, nonprofit groups, research agencies and similar employers nationwide.

Diane Finnerty, assistant provost for faculty at the UI and interim director of Central Midwest HERC, said that since the regional consortium was established last month, the university alone has posted 720 jobs, about 340 of which remain active. With 88,000 registered users on the site, the consortium has helped expand the UI’s search process.

“It is putting it out into a national audience that we didn’t have access to before, which is super exciting,” Ms. Finnerty said.

The advantages of using HERC are many, she said. Unlike other online job boards, HERC is largely focused on academia and nonprofit work. That narrows the gap between job seekers and employers with a pool of applicants that are more focused – and educated – than general job board users. About 93 percent of job seekers registered with HERC have a college degree, and the majority have a master’s degree or higher.

Yet the real advantage may be the site’s ability to help job seekers team-up to find well-suited employers. The database supports “dual-career” searches, or searches for married or cohabitating professionals who seek two positions in the same geographic area.

By catering to that group, Ms. Finnerty said, employers gain leverage over a significant portion of the modern workforce. According to the U.S. Department of Labor, couples with both spouses working accounted for 48 percent of all married couples last year. Within academia specifically, an estimated 36 percent of university professors have a spouse or significant other also in the education field, according to the Clayman Institute for Gender Research at Stanford University.

UI Tippie College of Business Dean Sarah Fisher Gardial said the presence of dual-career couples at the UI is comparable. Within the sciences, she noted, that figure is likely closer to 50 percent.

“If you think about it, on average, every third hire we do here on this campus – and maybe even higher depending on what field you’re in – you’re going to run into this issue with a spouse,” Ms. Gardial said.

The ability to find employment for one’s spouse is also usually a deal-breaker. The Clayman Institute reports that 88 percent of faculty who successfully negotiated a dual hire at their current job said they would have refused the position had his or her partner not found appropriate employment.

“That’s one of the challenges of us recruiting a dual-career couple here versus if we were in the city of Chicago,” she said. “Even though we’ve got a couple of colleges that are fairly close, in general, we just don’t live in a market that has an awful lot of choices when it comes to academic dual-careers.”

Like most employers throughout the state, the University of Iowa, for example, is also put at a disadvantage by its wage base, Ms. Gardial said. Within education, training and library occupations in Iowa, the median hourly wage this year was $20.30, equivalent to a salary of $42,234, according to state labor data.

Within the seven-county area forming the Corridor, jobs in education, training and library science fared slightly better, with a median salary of $45,373. That amount still falls short of the median nationally, however, which was $47,220 for those professions as of May 2015.

“As a state school, we’re not offering salaries as [they do at] private universities, which tend to be higher,” Ms. Gardial said. “So we often have to sell lifestyle and campus environments.”

Yet even among alumni, employers tend to be wary of out-of-state hires, Ms. Gardial said, particularly those with expansive resumes touting national or international experience.

Ms. Gardial said she knows one colleague, for example, with impressive professional experience at a Fortune 100 company who recently sought employment in Iowa. Despite having numerous international accolades, he often found himself being asked by employers what companies he had worked with in Iowa.

“If I hadn’t heard this consistently, I’d say it’s kind of a one-off situation, but I hear it constantly,” she said. “So [potential hires] feel like what they’ve done on a larger scale isn’t as valued here.”