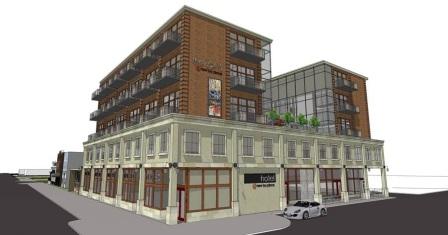 CEDAR RAPIDS – An added story and added city share of the costs didn’t change the Cedar Rapids’ city council’s support for a proposed development in the New Bohemia neighborhood.

The design for New Bohemia Station, to be built on two vacant lots at 1020 and 1028 Third St. SE, has changed since its initial proposal, adding a fifth-floor. Additionally, developer Allen Lerch of Sky’s Edge Development, requested that the city participate in funding the project through 10 years of tax increment financing at 100 percent, an increase from the original request of 10 years at 40 percent.

The cost of the project also has increased, from the original $6.5 million to $11.4 million.

Last year, Mr. Lerch’s project was chosen over another proposal to build at the site in the burgeoning arts and entertainment district, next door to the NewBo City Market, with an expectation that the project at least be under way by now.

Council members praised the multi-use features of New Bohemia Station, including a 225-seat basement movie theater, retail shops, hotel rooms and loft apartments. Concerns raised about recent changes in design, including the height of the proposed building, had diminished somewhat by the time the proposal came before the city council on Jan. 28.

“I just want to make sure it’s the best fit for the neighborhood,” Jennifer Pruden, executive director of the Czech Village/New Bohemia Main Street District, said after learning of the added story.

Citing historic preservation as one of the tenets of Main Street, Ms. Pruden was concerned that the new design could overpower and obscure the smaller, historic buildings in New Bohemia. Nearby landmarks, such as CSPS, 1103 Third St. SE, and the Cherry Building, 329 10th Ave. SE, are each three-stories tall, she noted, and need to maintain their prominence in the neighborhood.

While still acknowledging those concerns, Ms. Pruden later sent a letter to the city council, indicating an overall support of New Bohemia Station.

“The project will be a tremendous asset for the Main Street District, bringing much needed retail, housing, dining and hospitality spaces to our inventory,” she wrote.

“It has to be the most sought-after property we have, for good reasons,” Councilor Pat Shey said, citing attractions such as the cultural venue CSPS, restaurants, Water Tower Place condominiums and more.

Mr. Shey said if the project succeeds, it will be a “huge attraction,” but “if it fails and it’s a white elephant, it will be a big, black hole.” He and other council members questioned the delay, financing and timeline, but voiced support for the concept.

The site housed the former Brosh Funeral Chapel, but initially was the Cedar Rapids station of the Denver-Chicago Trucking Co., built in 1942, before becoming Kelty Radiator Co. Preservationists had tried to save the building, which was flooded in 2008, but could not make the case for a historic designation.

Additional ground tests showed that no environmental mitigation was needed at the site, according to the Iowa Department of Natural Resources. The city received the notice from the DNR in September; the building design was revised in the interim.

Mr. Lerch told the Corridor Business Journal that the fifth floor was added to accommodate an increase in the number of upscale, boutique hotel rooms. The original proposal included 14 rooms in the extended-stay hotel; the new design proposes 40 such rooms, with amenities such as whirlpool baths, kitchenettes and balconies.

Besides 10,000 square feet of retail space on the first and basement levels, a basement movie theater and a 3,000-square-foot restaurant on the main floor, the development will have a 300-seat ballroom on the second and third floors, he said.

According to a new timeline, New Bohemia Station should open in October 2015, with groundbreaking set for this July.

Just 12 parking spots are planned on-site, but Mr. Lerch pointed to a proposed agreement to use city parking, about one block away along the Cedar River, with 170 spaces.