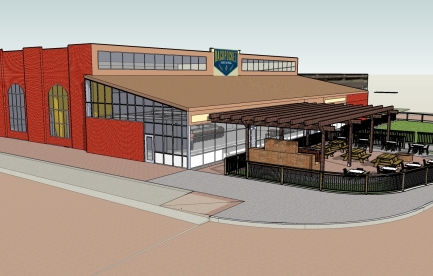 New location will allow business to expand to bottles

CORALVILLE – A McGregor-based brewing company is expanding to Coralville.

McGregor is a town of 876 along the Mississippi River, about 125 miles northeast of the Iowa City area. Owners of Backpocket Brewery, an offshoot of Old Man River Brewery in McGregor, plan to open a new facility in the Iowa River Landing District (IRL) in Coralville.

Backpocket sells mostly German beers in draft form. The expansion to Coralville will include a 25,000 barrel-per-year production brewery that will allow the company to bottle its product. The company’s beers include Slingshot, a dark lager; Jackknife, a pale ale; Wooden Nickel, a Scottish peated lager; Penny Whistle, a Bavarian wheat; and Gold Coin, a blonde lager.

The Coralville City Council during recent months has approved zoning and other similar requests to pave the way for a brewery in the Iowa River Landing District, a commercial area under development at the southeast corner of Interstate 80 and First Avenue. The city made the brewery announcement June 29.

The brewery will also feature a large tap room and beer garden for the public. Plans call for an anticipated opening of the 15,000-square-foot facility in summer 2012, west of the existing north parking ramp. Assistant City Administrator Ellen Habel said the business will be immediately west of the ramp, which leaves room for events like the annual Fry Fest that are held in that area.

The new brewery facility will include a German brew house that will promote sustainability during the brewing process. Its design allows for a reduction of carbon consumption by 60 percent, recapture of water waste and composting of organic waste.

“The Iowa River Landing shared a vision of creating a destination,” he stated in an e-mail. “Besides just brewing beer, we will be operating a tap room that will focus on teaching people about beer, through tours and tastings. We want a place where people will visit us, and the Iowa River Landing was perfect for that. They saw the potential draw and wanted to be a part of it, making it a mutually beneficial endeavor.”

The Iowa River Landing District is a 180-acre area slated for development with projects such as the University of Iowa Hospitals and Clinics’ new outpatient facility. The $73 million, five-story, 150,000-gross-square-foot medical facility will divert 20 percent of the main hospital’s traffic to the IRL