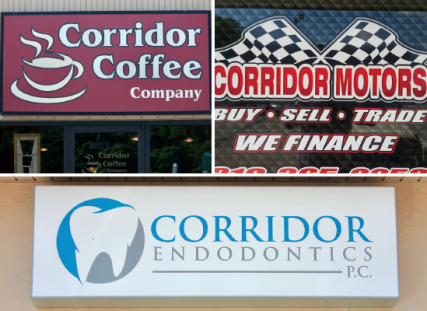 Three local businesses with the word “Corridor” in their names and on their signs. PHOTOS KAITLIN RIGGLE

What’s in a name? It’s an existential question that has arisen at the CBJ offices over the past few months following the roll-out of a new brand for the region’s joint venture and the region itself: ICR Iowa.

While opinions have varied on the new brand (including on our own opinion page), journalistically, we have been most interested in understanding how businesses have been using and identifying with the ex­isting regional brand, Iowa’s Creative Corri­dor. Do they see it as an important regional signpost or a simple marketing shorthand?

Last August, we reported that some 203 entities had incorporated as “Corridor” or used it as a fictitious name, according to Iowa state records, up from fewer than 100 as of a decade ago. That was enough to get a sense that the regional brand was taking hold, but we wondered just how many of those entities actually used the word “Corridor” in their brand or day-to-day business dealings?

The list, available at right, is our latest at­tempt to understand that. Over the past few weeks, CBJ staffers reached out to more than 170 companies and organiza­tions listed with the state as active corpo­rations or found through online searches in an attempt to verify their status.

We were ultimately able to directly verify 91 of those, categorizing them on our list as businesses, brand units of existing busi­nesses (such as “Created in the Corridor”) and legal corporations, or those businesses registered as “Corridor” but doing business under another name. Even after all of that work, there were still nearly 80 organiza­tions that could not be reached, meaning the actual number of organizations using the Corridor tag could be higher.

And while each organization has its own reasons for using the Corridor name, there were some commonalities that seemed to float to the top in our in­terviews. Many of those on this list were smaller startups and new-to-market com­panies, and several owners interviewed said the choice stemmed from a desire to represent they are “local” to the region.

“It was a combination of geographical and ‘joining the family’ – just to let every­one know we’re local,” said Rich Cook, owner of Corridor Insulation, who found­ed his company in August 2012, shortly after the Creative Corridor name was for­mally introduced. “I saw numerous busi­nesses using the name, and I thought it might work for me.”

For Heather Adams with the Corridor Hockey Association, a nonprofit sports league, the name was an opportunity to expand her organization’s boundaries outside of Cedar Rapids and Iowa City, and as far as Waterloo and central Iowa.

“We wanted to be all-inclusive. We have people who travel from all different com­munities. We’re not just about Cedar Rap­ids, even though we primarily play at the Cedar Rapids Ice Arena,” Ms. Adams said.

Nearly all of those interviewed ex­pressed little interest in changing their name to align with the new regional brand, citing existing brand equity and fi­nancial costs, although a few committed to keeping an open mind.

“It [ICR Iowa] doesn’t roll off the tongue as well, but if that’s what the community wants, I guess I’d be open to changing it,” said Raymond Liu, an auto­motive consultant with McGrath Automo­tive who goes by the moniker “The Corri­dor Car Guy.” “I just think ‘Corridor’ has more of a small, tight-knit community feel that the other name doesn’t.”

Considering that the Corridor name seemed to take hold with new businesses looking for a local hook, will the new ICR Iowa brand be reflected in the next crop of local entrepreneurs and business names? Only time will tell.