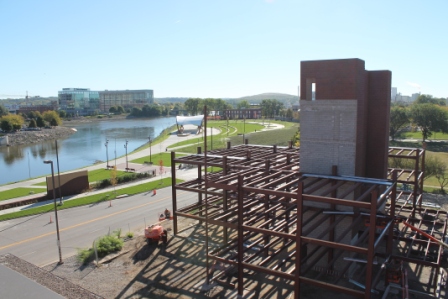 CEDAR RAPIDS – With or without the casino, it will be a changing part of town.

Located immediately off Interstate 380 on the west side of downtown, the Kingston neighborhood is queued up for multiple developments. The first few are already ongoing.

For one, the city of Cedar Rapids bought out dozens of parcels of land in the area after the flood. Much of that will likely not be commercially redeveloped. Then there is the recently-completed McGrath Amphitheatre and public art along the river.

The broader district is known as Kingston Village. Fred Timko of Down to Earth Development is developing at Kingston Square, which is the area between the river, interstate, First and Third avenues. The area along Third Avenue is expected to be designated as a historic district.

“This is going to become sort of the New Bo of this side of town,” he said. “Other than this Kingston Square area, the rest of Kingston Village, the vision of that is to have more residentially developed, as opposed to a lot of commercial or office. The vision is that it will be a complete cross section of types of housing, from market-rate apartments, single family houses, condos, all kinds of housing is what we would like to see over here. If we can get more people living down here, higher density, it will help all this downtown (development).”

The next is Kingston Commons and the rehabilitation of the former Louis Sullivan bank building, 101 Third St. SW. Kingston Commons is a new residential condominium building going up next door, along First Street SW. The two projects are being developed by Mr. Timko  and his business partner.

“New Bo was kind of the shining star after the flood and this area over here needs that kind of boost,” Mr. Timko said.

The question mark is the proposed Cedar Crossing Casino, which if approved by the state, is expected to be located in the Kingston neighborhood, about two blocks from the Sullivan bank building. There are a handful of developers considering or in the process of renovating several of the commercial buildings and homes in the area, as well.

“When we started doing this, four other developers got interested in four other (nearby) buildings. Then the casino came along. That will be a huge impetus to this area if that thing lands over here,” he said. “That will hopefully shift the mindset from the river being the edge of downtown to the river going through the middle of downtown. We’re closer to the heart of the downtown than the federal courthouse.”

Mr. Timko bought the Sullivan bank building in December, before the location of the proposed casino had been announced. Either way, he expects the area to be popular.

Mr. Timko and his business partner renovated the Bottleworks residential building in downtown Cedar Rapids, which is occupied by many young professionals. All the units are sold now and he was looking for a new project. He and his partner bought the Sullivan bank building from Wells Fargo.

The 4-story building was gutted and cleaned out after the flood, although many of the historic details of the 104-year-old bank building remained intact, such as the vault doors, which will be prominent features of a new restaurant that will be announced soon. The larger vault will be used as a private dining room, while the smaller vault will be a wine room.

The bank’s mural has been restored and the original clocks, and stained-glass skylights remain. The light fixtures are replicas created during the 1970s; the originals are at the Art Institute of Chicago.

The floor of the bank is at the 100-year flood level. Some flood mitigation measures have been incorporated into the property, but Mr. Timko said he isn’t worried; the water levels in May and June came nowhere near it.

Adjacent to the restaurant is vacant space Mr. Timko hopes to fill with a retail use, such as a salon/spa, art gallery or similar use.

The upper three floors have been refurbished with new carpet, lighting, ceilings, restrooms and other infrastructure and is being leased as office space. The entire building has been rewired and outfitted with new infrastructure, including a renovated elevator. Fiber optic line is available and waiting to be connected to the building once a tenant requests it.

A big draw of the office space, Mr. Timko said, is free parking. There is an existing parking lot next to the Sullivan building and another one under development at a half-block parcel next to the Kingston Commons. The building is a five-minute walk to city hall and since moving in, he no longer drives to meetings downtown, he said.

“When you go downtown the first things you ask is, ‘where are we going to park and how much is it going to cost?” he said.

Steel is going up for the Kingston Commons building next door. The six-story building will include 17 condo units that are higher-end and will likely appeal, for the most part, to the empty-nester set. There will be parking on the first floor as a flood protection measure, with two indoor spots assigned to each unit, a rarity for downtown residential buildings.

Most units are 1,600 square feet, with two bedrooms and two bathrooms and balconies with views of the river and new amphitheatre. Early buyers will have some say on the cabinets and flooring for their unit. The floorplans are set. The building is expected to be complete in May.

The building is simple and will not include amenities such as a fitness club, Mr. Timko said, because there are two fitness centers within walking distance.