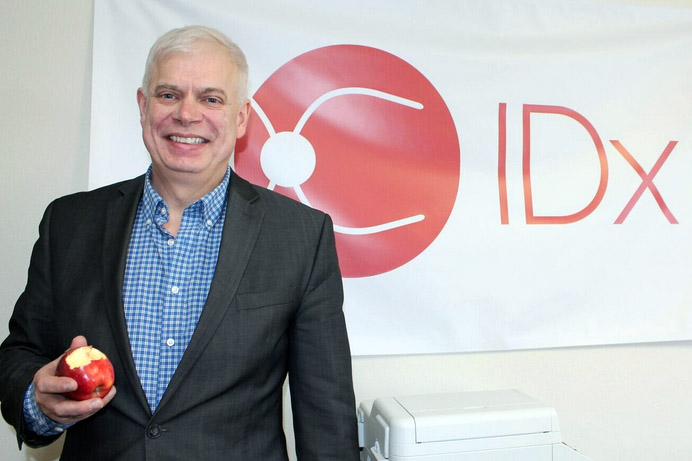 Decades after embracing the potential of AI to diagnose eye disease, University of Iowa retina specialist and IDx President Dr. Michael Abramoff may soon get his bite of the apple. PHOTO DAVE DEWITTE

The clinical trial results from IDx’s first product candidate aren’t out, yet optimism is high that its IDx-DR device could soon be saving the vision of thousands of Amer­icans each year who suffer from diabetes.

The University of Iowa Office of Re­search and Economic Development an­nounced Feb. 5 that the Food and Drug Administration (FDA) granted the UI spinout’s IDx-DR a “breakthrough de­vice” designation that will result in an ex­pedited review of the product’s safety and efficacy. The designation is restricted to technologies that provide for more effec­tive treatment or diagnosis of life-threat­ening diseases and those that cause irre­versible damage.

“It’s the first time for us,” said Marie Kerbeshian, director of the UI Research Foundation, which licensed the intellec­tual property the IDx device uses from UI faculty research. Under the expedited pro­cess, the team at IDx in Iowa City and the UI could know in as little as six months if IDx-DR is cleared to go to market.

The system uses artificial intelligence to automate detection of diabetic reti­nopathy, which causes blindness in some 24,000 Americans each year. With about four hours of training, it can be used by operators with no post-high school ed­ucation, enabling them to tell a patient within minutes if they have early indica­tions of diabetic retinopathy that require treatment by an eye specialist.

Early diagnosis is critical in diabetic reti­nopathy, according to IDx President Dr. Mi­chael Abramoff, a retina specialist, because the disease can be managed if detected early, potentially preserving a patient’s eyesight. If the patient goes undiagnosed until they experience signs of vision loss, he said, the damage is already irreversible.

Diabetes is a growing medical problem that afflicts 9.4 percent of Americans, ac­cording to the American Diabetes Associ­ation, causing an assortment of medical problems from kidney disease to ampu­tations. Diabetes is typically managed through consultation with primary care physicians, who typically refer their pa­tients to opthamologists for monitoring of the potential for eye disease compli­cations because they lack the specialized equipment and knowledge.

Blindness occurs too frequently, Dr. Abramoff said, because 30-50 percent of diabetic patients don’t make it to their eye doctor appointments – often due to a com­bination of travel and time requirements, and even their own physical limitations.

“Everything is managed well [for dia­betics] in primary care except this retinal eye exam,” Dr. Abramoff said. “Between 20,000 and 25,000 people a year go blind – needlessly – from diabetic retinopathy.”

The FDA’s breakthrough device desig­nation set off a chain reaction of events at IDx, which is led by former telecommu­nications executive Gary Seamans. The most noticeable one has been the hiring of more staff so that IDx can quickly move to market once it receives the green light from the FDA. The company, with 25 em­ployees, is poised to expand from its mod­est Iowa City headquarters off Highway 1 into a larger location.

“We’re excited and we think the FDA’s excited,” Dr. Abramoff said. “Hopefully, the FDA being excited means they like what they see. We have no way of know­ing how long it’s going to take.”

The stakes are high and personal for Dr. Abramoff, a physician-scientist at the UI who became intrigued two decades ago about the potential for computer al­gorithms to detect eye disease. The Dutch-born doctor authored more than 300 pub­lications, received 10 patents and applied for six others in the field, all while continu­ing to treat patients at UI Health Care.

Clinical trials involving some 900 pa­tients at primary care clinics scattered across the United States were completed last July. Results of the system’s findings on patients were compared to evaluations of their retinas by a leading international eye institute using high-quality retinal im­ages taken with multiple imaging systems.

“We described how we built the algo­rithm, how we did the clinical trial, how we never interfered with the clinical analy­sis, how we got the independent analysis,” Dr. Abramoff said.

IDx-DR typically flags “abnormal” findings in about 10-12 percent of pa­tients screened, who are referred for treat­ment by eye specialists. The algorithm was developed with a margin of safety which could mean some false positives, but Dr. Abramoff says he’s confident the system is more accurate than he, or any other individual eye doctor, can be in de­tecting the disease.

When word spread of Dr. Abramoff’s plans to automate diagnosis years ago, he was dubbed “the retinator” by some of his peers.

“It’s from the movie, ‘The Termina­tor,’” he said. “It’s a bit facetious, but it’s also serious, because am I destroying opthamologists jobs?”

Dr. Abramoff sees it differently. He says diabetic patients who receive a diabetic retinopathy diagnosis using IDx-DR will no longer skip their appointments with eye specialists, and will give those opthal­mologists the opportunity to provide the treatment needed.

Still, he understands that the use of au­tomation for such an important diagnosis can be an emotionally charged issue.

“There’s a lot riding on this,” Dr. Abramoff said. “People are excited about putting AI [artificial intelligence] in health care, but nobody has done it – at least where it matters.”

While receiving the results of the clinical trials was a long-anticipated moment for Dr. Abramoff and his team, he said it was ultimately anticlimactic because he real­ized how much more work had to be done to get the technology into places where it can help patients. His next big moment will come when he’s finally allowed to talk about those results. That will occur on Feb. 22, when he presents the findings to some of the most preeminent scholars in retinal disease at the annual meeting of the Macu­la Society in Beverly Hills.

A successful market launch of IDx-DR could create momentum for IDx’s broader plans to use AI to detect one of the most common eye diseases, glaucoma, and a range of other diseases affecting other bodily organs.

Ms. Kerbeshian says UI faculty were able to develop the algorithms in part because they had access to decades of pa­tient data from the UI health system that they could use to predict the future of pa­tients from observed conditions.

While companies like IDx could make their founders wealthy, Ms. Kerbeshian said it’s often not the financial potential that drives UI medical faculty members to start companies, but a desire to be more impactful than they can be in treating pa­tients one at a time.

“Through your IP [intellectual prop­erty] research, if that extends to becom­ing a standard of care, it can have such an impact all across the country and the world,” she said.

With the support of strong angel inves­tors, Dr. Abramoff said IDx is fully funded to support the launch of IDx-DR into the market. IDx has also been in conversation with distribution partners such as IBM, which is already working with the compa­ny to introduce IDx-DR in Europe.

The company has also begun conver­sations with investment banks about the possibility of going public to help fund its further development and launch of addi­tional products, he added.