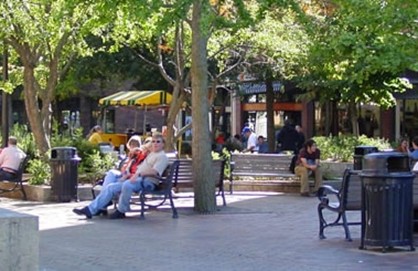 Those who sign on will be agreeing to a $2 per $1,000 of taxable value tax added to their property tax bill

Downtown Association of Iowa City’s SSMID (Self Supported Municipal Improvement District) committee has put together language for a petition to move forward on creating the tax district, which would pay for a position to manage downtown commercial vacancies and marketing efforts.

The petition outlines the SSMID boundaries in detail. The district would extend south to Burlington Street, west to include the Old Capitol Town Center, east to Gilbert Street and just north of Bloomington Street, to include a laundromat and Pagliai’s Pizza.

The boundaries were changed slightly from the committee’s original plan. Initially, the boundary was to extend along the walk way from Iowa Avenue to the northside neighborhood.

“The walkway between Van Allen and Seashore is zoned public, which legally created an interruption in the zone. So we needed to go down (east on) Iowa Avenue a little bit to capture an appropriately zoned property,” said Karen Kubby, a member of the SSMID committee. “One of UAY (United Action for Youth) houses is in the SSMID zone now. It doesn’t really (change anything). And they are tax exempt, so they don’t pay property taxes, so it won’t impact them.”

The zone extends east along Iowa Avenue, extends north on Gilbert Street and west on Jefferson Street to connect and include the northside neighborhood in the SSMID.

“We didn’t want to lose the northside and lots of folks in the northside want to be a part of it,” Ms. Kubby said. “That’s why we had to move (the boundary) so we could have contiguity with the northside.”

Now that the language is spelled out and the boundary lines are drawn for the SSMID, the committee can begin collecting signatures for the petition. If successful, the SSMID will be presented to the Iowa City City Council this fall before it begins its budget planning for the next fiscal year.

Those who sign on will be agreeing to a $2 per $1,000 of taxable value tax added to their property tax bill. If approved, the tax would expire in four years.

“The council each year as they develop their budget will determine what the SSMID levy is,” she said. “Our intent and the intent of the petition, which is very clear is that the council for the first four years would vote for the 2 percent each year. But that will be an annual decision and it will be our job to make sure they’re at $2 because that’s the vision for living out our plan, and the budget that we’ve created will need the $2.”

The SSMID tax will pay for the activities of the DTA, a business development manager, two assistants and marketing. The petition calls for the creation of a SSMID board, which is different from the existing SSMID committee.

If tax-increment financing agreements are created downtown, the SSMID tax will still be collected.

Local economic development agency representatives will select the board members.

“So it’s not the SSMID committee choosing those people,” Ms. Kubby said. “We wanted to create some distance because some of us on the committee may want to apply to be on the SSMID board.”

The board will have representation from large and small downtown businesses, property owners, the northside neighborhood and the University of Iowa. Although the petition spells out ways the money may be spent, it will be the SSMID board that will have the final say.

“We know it’s a risk to put out that many details because we know people can find something small that doesn’t suit them, so they’re against the whole thing,” she said. “But we felt we needed to really outline the plan during this time, in this slower-than-hoped-for economic recovery, when we’re asking people to pay additional taxes for specific purposes. We felt an obligation to be specific and that will make the SSMID board even more accountable at the three-year mark.”

— Three councilors either own businesses or have business interests downtown and would need to recuse themselves from a vote. Therefore, three out of the four remaining councilors would need to vote in favor of the SSMID for it to pass, regardless of a protest petition.

— A market niche study commissioned by the city and chamber three years ago validated the need for a downtown manager. The study did not have a solution to pay for the position. The manager would be a liaison between property owners, businesses and commercial real estate brokers to attract needed businesses to downtown.

— This isn’t the first time SSMID has been brought up in Iowa City. It was discussed when the Coral Ridge Mall was built 13 years ago as a way for the downtown to compete with national retailers. It has resurfaced as the downtown business landscape has shifted in response to the economy and a change in the bar-entry age from 19 to 21. Since that change, a handful of bars have closed downtown.

— The University of Iowa has tentatively committed to contributing $100,000 annually to the SSMID.

— Condominiums are not subject to the SSMID, according to recent state law, which removes a sizeable portion of housing from the SSMID district, a point of contention in previous debates. Apartments would be subject to the tax.

To view a PDF of the petition, click here.