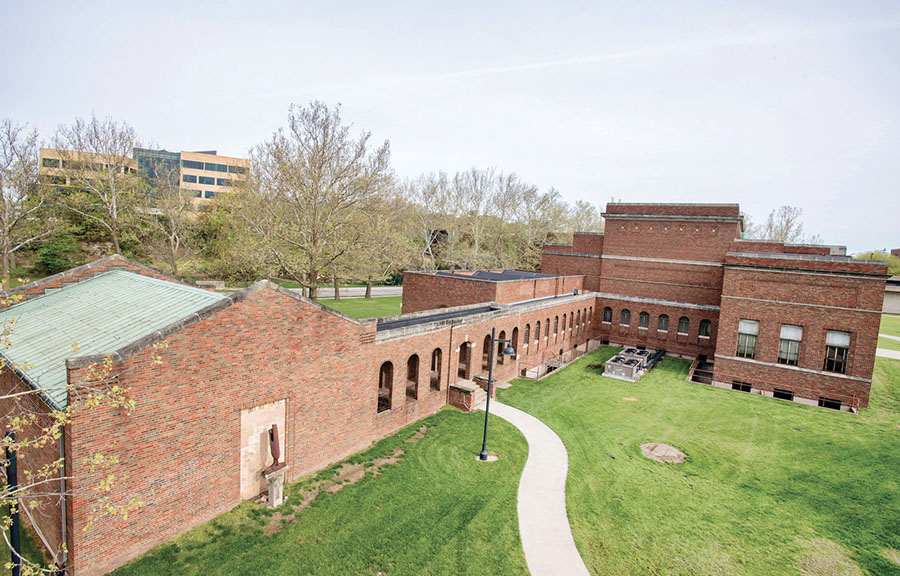 The University of Iowa’s former Art Building, which was mothballed after being damaged in the flood of 2008, will be home of a new innovation center, pending Iowa Board of Regents approval this week. CREDIT UI

A historic University of Iowa building erected in the 1930s to bring the then-revolutionary “Iowa Idea” to life is being reincarnated as the state’s bold idea factory of the future.

In what one UI official is calling a “game changer” that will boost the school’s ability to support the next generation of entrepreneurs and turbocharge economic development, the university late last month announced plans to transform the former Art Building – decommissioned after the flood of 2008 – into a collaborative innovation center bringing together all 11 colleges to “solve problems and change the world.”

“I’m thrilled to be a part of it,” said David Hensley, executive director of the John Pappajohn Entrepreneurial Center (JPEC), which will anchor the new center. “It really is going to be a campus-wide initiative generating economic development across campus, across the state and across the globe. And when you take that coupled with what’s happening in the region – from the [Iowa City Area Development Group] and NewBoCo to ICR Iowa and others – the cosmic tumblers are coming together to position the university for the future and build this ecosystem that’s going to take the community to the next level.”

The UI, which placed the innovation center project on temporary hold as part of its five-month building moratorium, will ask the Iowa Board of Regents for for­mal permission to convert the Art Build­ing at its Sept. 12 meeting. The project, expected to cost between $20-$25 million, will revitalize all 53,000 square feet of the flood-ravaged building and be funded through private donations.

Innovation centers have become some­thing of a trend on university campuses, with Carnegie Mellon, Brown University, the Rochester Institute of Technology and the Universities of Connecticut and North Carolina at Chapel Hill among the institu­tions that have established or announced plans for them, according to the Chronicle of Higher Education. Iowa State Universi­ty’s $84 million glass-encased Student In­novation Center is set to open next year, replete with classrooms, collaboration and meeting space, a test kitchen, a store selling products made at the center, and fabrication areas for electronics, wood­working, textiles and other materials.

UI officials say their innovation center will be a bit different, eschewing the usual futuristic architectural style of such cen­ters in favor of honoring the university’s long history of inventiveness and creativ­ity. The Depression-era building was con­ceived as an arts colony that would em­brace the Iowa Idea: the concept that art history and art creation should be joined together under a single roof instead of be­ing taught separately.

The atmosphere in the building en­couraged groundbreaking art, including the works of painter Grant Wood and sculptor Elizabeth Catlett, the first African American to be awarded a Master of Fine Arts degree in the United States. Now the UI hopes it will inspire groundbreaking inventions and big ideas.

“Once restored to its original grandeur, the Art Building will be home to the next evolution of the Iowa Idea and continue the heritage of 170 years of research and discovery at the university,” said Steve Mc­Guire, director of the School of Art and Art History, in a news release. “The Iowa Idea will expand beyond the arts to encompass engineering, health care, the liberal arts, law, business, entrepreneurship and other disciplines on campus.”

“I think it’s a really neat idea from a number of different angles,” said Kim Casko, president and CEO of the Iowa City Area Chamber of Commerce, and part of a group of entrepreneurial, busi­ness and community leaders who helped UI officials with their visioning process for the innovation center last year.

“To use a space that’s already there, decommissioned after the flood, is a wise use of funds,” she added. “Everyone thinks you need a new shiny building to house an innovation center, so repurpos­ing an existing building is both effective and efficient. It’s also a great idea from a historical perspective, because it’s a big piece of the whole Iowa Idea and was kind of an innovation center of its day with a great story to it.”

Mr. Hensley said he and Tippie Col­lege of Business Dean Sarah Gardial were “blown away” when they first toured the site. Not only does the Art Building, locat­ed on the banks of the Iowa River at the foot of the new Hancher footbridge, have a rich history of innovation, he said, but it’s in a central, accessible location between the undergraduate campus and the univer­sity’s health and professional colleges.

“We’re very excited about the space and believe this is a tremendous opportunity,” he said, adding that the new facility comes at a critical time, with JPEC running out of space to house would-be entrepreneurs and entrepreneurship majors. The UI now offers a BBA in entrepreneurial manage­ment and a BA in enterprise leadership, as well as an entrepreneurial certification program open to any student.

Mr. Hensley said redesign and con­struction is expected to take about two years, with the building ready for use by the 2021 spring semester. In the mean­time, the university will be forming a committee of faculty, students and com­munity innovators who will spend the next 12-18 months reviewing existing assets and resources and making programming recommendations.

“We’re not waiting for the structure to open,” he said. “By the time the building opens, this will be a much more enhanced program.”

Ms. Gardial was unavailable for comment before the CBJ’s deadline, but said in a release that the goal was ensuring the innovation center “is a welcoming place for potential innovators and entrepreneurs from all across campus, students and faculty in every college and department, and from around the state of Iowa.”

The center also will be the hub of the university’s economic development efforts, a prospect that excites Jennifer Daly, president and CEO of ICR Iowa, the regional joint venture formed to work on workforce and business attraction initiatives.

“The outcomes of this type of center could include an increase in new companies launched in our region, stronger companies benefiting from University of Iowa innovation and talent, and growth in talented people who want to live, work and learn in our region,” said Ms. Daly who also served on the leadership team envisioning what the innovation center should be.

While the university has a lot of space devoted to entrepreneurial activity, “what they felt was lacking was space not owned by a specific college, a space truly designed to bring multiple colleges together around a central project or problem,” Ms. Daly said, adding that much of the focus of the leadership team centered around “how do we help break down some of those silos and create opportunities for collaboration? It takes lots of people with different skillsets around the table to solve problems and that is not necessarily how universities are structured.”

“I’ve been at the University of Iowa for almost 20 years and I’m really seeing a huge opportunity,” Mr. Hensley said. “Innovative people from a wide variety of disciplines are coming forward and wanting to be part of this. It’s a game-changer.”