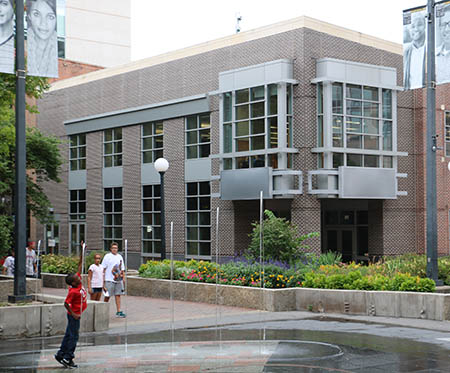 A prime location in downtown Iowa City could become home to a new collaboration between the University of Iowa and the Iowa City Area Development (ICAD) Group, which organizers hope will foster partnerships tied to technology, business and education.

The space, currently being referred to as MERGE, would be located on Iowa City’s pedestrian mall at 136 S. Dubuque St., which had previously housed The Wedge pizzeria until it closed in the fall of 2014. Since then, the space has served as a holiday pop-up store, and more recently as the headquarters for this year’s EntreFEST.

The entrepreneurial spirit at the space is likely to continue next year with the possible opening of MERGE, the working name for a two-floor, joint partnership between ICAD and the UI’s Office of Research and Economic Development.

The proposed center would support business partnerships forged through programs such as UIPartners and its subsidiary, Dev/Iowa, which provide technology services and tech training for small businesses. It also is being designed to incorporate faculty, staff and post-undergraduate students working with the UIVentures program, which provides entrepreneurs with mentoring, research and funding assistance.

“In 30 years, I want people to say the world changed because we created this space,” ICAD President Mark Nolte said. “That’s our goal.”

Dan Reed, UI’s vice president for research and economic development, said the space would fulfill a core part of his office’s mission by uniting the university with businesses, cities, and local and regional economic groups.

“Because you have to bring in all the stakeholders; we collectively have to build an ecosystem,” said Mr. Reed, who worked as corporate vice president at Microsoft prior to coming to the UI in 2012. He said that while there are many tech companies and innovative researchers working in the Corridor, most of those operations are geographically spread out, to the detriment of the greater business community, when compared to an area like Silicon Valley.

“That’s an incredibly dense network, where people meet one another in all kinds of circumstances outside work,” he said. “We’re trying to build the density of the community, and that means increasing the number of venues where people can interact, entrepreneurially and socially.”

The space would include the ground level floor as well as the basement level, which is currently occupied by University of Iowa Health Care. Mr. Nolte said those offices are used for software training by UIHC staff, and that those operations would be relocated to the Iowa River Landing UI Health Care offices.

Mr. Nolte said the incorporation of the basement level will add needed scale to the project, which he also hopes piques the interest of passersby. The space at the northeast corner of the Dubuque and College streets butts up against the Iowa City Public Library, which occupies the second story, and is adjacent to dozens of commercial outlets including the Sheraton Iowa City Hotel.

The building is also two blocks from the UI College of Engineering, which Mr. Reed hopes encourages additional community and business outreach.

“It’s that free-flow of movement that we want to try to create, as opposed to having the artificial separation that sometimes exists between ‘I’m doing research and teaching’ or ‘I’m working on a startup,’” Mr. Reed said.

Unlike the Bedell Entrepreneurship Learning Laboratory on campus, MERGE would not be focused on undergraduate student startups, which cover a wide range of business applications at the learning lab. Instead, it would target computer science, engineering and design endeavors, although David Conrad, assistant vice president for economic development, noted it will also cater to a wide range of tech interests.

The community at large will also have a presence, with both entrepreneurs overseeing businesses in the incubator stages and professionals from established businesses working there.

“One of the things we’ll try to do is blur the lines between the two,” Mr. Nolte said of the university-community hybrid, which is part of a broader university movement to “lower the drawbridge” in order to allow more public participation.

Mr. Nolte said the project is still in the planning stage, which includes reaching out to potential business partners, who would submit development proposals.

ICAD also is still seeking funding for the project, the cost of which should not exceed $1 million, he said. Mr. Nolte said the group is applying for federal Economic Development Administration grants, which he hopes will cover a “significant” portion of the building’s renovation, technology and office costs.

The project is still subject to approval by the city, the staff of which were drafting a proposed lease for the city-owned space as of late last month. Mr. Nolte said the project will not receive any direct economic incentives from the city, though rent for the space has not yet been determined.

Mr. Nolte said the location may also become ICAD’s headquarters and possibly replace the current IC CoLab, both of which are located about two blocks southeast near the corner of Court and Linn streets. He said he hopes to have schematics with details of the site’s interior completed in September, with a targeted opening sometime next spring.