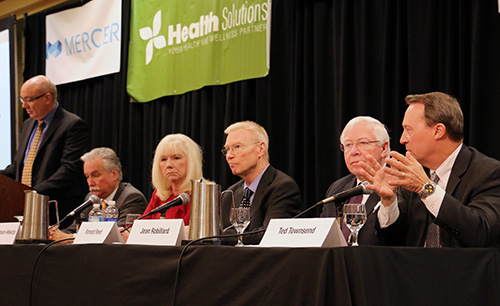 The leaders of the Corridor’s hospitals and health care systems met for a panel discussion at the CBJ’s 2016 Health Care Summit, with the intent of digging into some of the biggest health care issues of the day. The conversation did not disappoint. Over the course of an hour, our expert panel, moderated by Scott Fisher of McCrossen Consulting, analyzed everything from the state’s pending Medicaid transition to “Death with Dignity” laws. What follows is a sampling of thoughts on some of the biggest topics of the morning, as shared by Tim Charles of Mercy Medical Center, Judy Johnson-Mekota of the Iowa City VA, Ron Reed of Mercy Iowa City, Jean Robillard of University of Iowa Health Care, and Ted Townsend of UnityPoint Health Cedar Rapids. Weigh in with your own take on Twitter, @CBJournal #CBJHealth.

What are your greatest concerns for 2016?

Ted Townsend:
“I am very, very concerned about access to the Medicaid population under this [state Medicaid privatization] change, because I think it’s going to become increasingly unaffordable for many providers, particularly independent, smaller providers, and I worry that they will just reduce if not shut down access to this population.”

Dr. Jean Robillard:
“I’m very concerned about … mental health. It’s not viable to put psychiatrists in every community. It will never happen, but it’s probably viable to … [provide access to] primary care physicians who understand some of these issues.”

Judith Johnson-Mekota:
“You’ve certainly heard many stories about veteran suicide, homelessness, etcetera, so mental health is certainly a concern for us, and we’re really trying to target our efforts in providing care, not only within our walls, but out in the community as well. It’s vitally important that we have community partnerships.”

How do you transition from a fee-for-service model to a fee-for-value model?

Ronald Reed:
“You have to make a decision at some point that you’re going to move in that direction, and accept that you may not make the same fee-for-service payments that you’ve made historically. I think that within the next five years, that we will move [it] to be the major form of payment in the United States, both for Medicare and for large portions of insurers like Wellmark.”

Tim Charles:
“You’re going to see within Mercy more physicians who are in leadership, more nurses who are in leadership [and] you’re going to see less people like me. And the reason is that, honestly, this is such complex work that we have to have individuals who have that core understanding to be able to help drive the transformation that is underway.”

Is universal health care as supported by Bernie Sanders realistic or not at all?

Judith Mekota-Johnson:
“Being in a national health care system, there are a lot of advantages to that. Certainly standardization and other economies of scale are associated with being in a system. But there’s also certainly a downside, as with any system, and I think you just have to take a critical look.”

Tim Charles:
“If we were able to have a line of sight to [universal coverage] in way that didn’t totally take apart the market – because market really works for us in this country … I have a hard time believing that we wouldn’t rally behind it. The problem is, I haven’t heard anybody who’s been able to articulate how we get from here to there.”