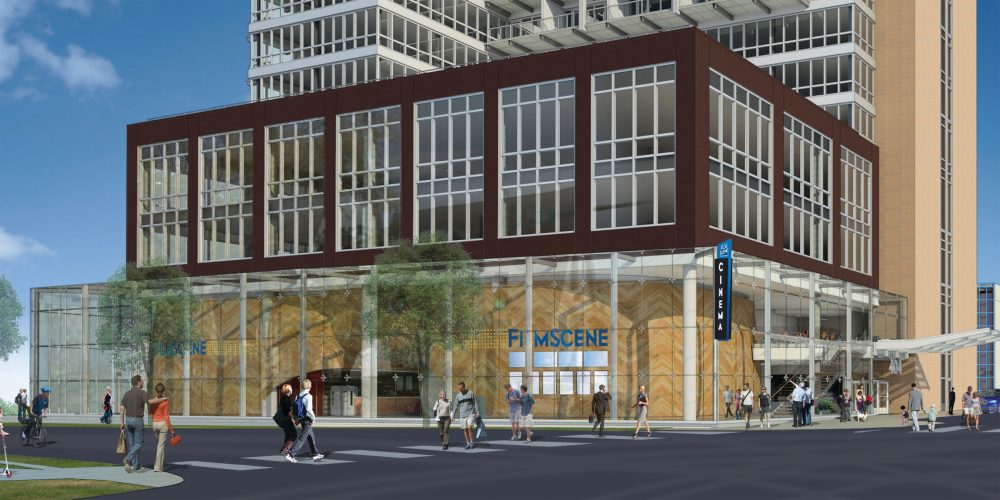 The second generation of FilmScene features a unique twist on the traditional movie marquee, making use of the Chauncey building’s glass facade to put its name in lights. CREDIT ROHRBACH ASSOCIATES

With a landmark three-cinema arts facility set to open in Iowa City’s Chauncey building later this year, the leadership team at FilmScene has plenty on its plate. But still hungry for more, the nonprofit is teaming up with the Englert Theater in hopes of realizing another not-so-modest goal.

“This is a community that values collaboration, that values people working together to achieve big things,” said FilmScene Associate Director Andrew Sherburne of the joint Strengthen Grow Evolve campaign, launched this past weekend with a program at the Englert. “Our big, broad, visionary dream is that we want to be the greatest small city for the arts in America.”

In the short term, the campaign will fund the revitalization of FilmScene’s Scene 1 cinema on the Ped Mall, and preservation and enhancements at the 106-year-old Englert, including marquee renovation, new seating, better sound and lighting, and a solar installation. It will also help pay for the new FilmScene facility, as well as education and outreach, the hiring of a new community engagement coordinator and three arts festivals: the existing Mission Creek and Witching Hour festivals and the new (re)Focus Film Festival set to launch in 2020.

The initiative’s long-term goals are loftier, however.

“We have a deep goal of ensuring that every kid in the school system engages in our spaces at least one time before they graduate,” said FilmScene Executive Director Joe Tiefenthaler, adding that the two venues offer year-round arts education workshops targeted at all ages.

Englert Executive Director Andre Perry said that collaborative effort will start with Iowa City organizations like UNESCO City of Literature, Riverside Theater, Public Space One and Hancher, “but the hope is it is successful, and something that grows across Johnson and Linn counties.”

“When you look at the landscape as it exists, from getting Hancher back and Voxman [Music Building] opening up downtown to preserving and modernizing the Englert through this campaign and opening up [the expanded] FilmScene, getting to that next level is aspirational but realistic,” Mr. Tiefenthaler said, adding that Iowa City made Thrillist’s “Best American Cities for Creatives (That You Can Actually Afford to Live In)” list last month, joining the likes of Albuquerque, Nashville and Baltimore.

“We want to be able to tell the rest of the country what we have here … to see a big sign at the Eastern Iowa Airport that says, ‘Welcome to the greatest small city for the arts.’”

Earning a national reputation as a creative haven has implications far outside the artistic community. It also brings real money, through crowds of people eager to visit, spend the night, shop, eat out, or even settle down for good.

According to a 2017 economic impact study, the Englert and FilmScene alone generated $3.2 million in annual spending, with about three-quarters of patrons reporting they also shopped or dined out when attending events, and the average patron spending between $32–$34.

Mr. Sherburne estimated the annual economic impact would reach past $4 million after the opening of the new 225-seat theater in the Chauncey, and grow to $5 million by the following year – “an incredible statistic in a way, because the fundraising community would be repaid in under two years.”

Then there is the harder-to-measure impact of fostering a thriving arts scene in a region desperate to retain its young people and attract new workers.

“Everything in economic development right now centers on answering the question, ‘How do we attract the next generation of workers?’” said Mark Nolte, president of the Iowa City Area Development Group. “Having a vibrant arts scene is a critical component to this end.”

“When people ask us, ‘Why are you doing this,’ obviously we both have immediate needs, but it’s all about how we make this a more attractive place to live, work and visit,” Mr. Perry agreed. “What makes this place, for lack of a better word, cool?”

Modern elegance meets classic retro at the reimagined FilmScene, which puts a contemporary stamp on movie house staples from the box office and concessions area to the marquee outside.

“It’s a modern, state–of–the–art building, so we wanted something that felt at home in that building, as well as something that evokes that emotion you get when you step into a movie theater,” said FilmScene’s Andrew Sherburne, adding that while respecting the glassy, futuristic space, “we’ve worked to kind of bring those traditions through.”

Designed by Rohrbach Associates, the space uses materials and design elements intended to marry old and new, down to the lighting, which incorporates classic bulbs to illuminate a modern concessions area, and is used elsewhere to pay homage to the neon theater signs of the past.

Highlights of the new FilmScene, which will bring the nonprofit arthouse’s total theater capacity to 325, including its current location on the Iowa City Ped Mall, include:

A twist on the movie marquee: Because traditional marquees like the Englert Theater’s fall outside today’s updated city code, designers put the Chauncey’s glass façade to work, affixing FilmScene’s name in lights to the wood-wrapped pods that house the theaters and face the street. Below that are displays listing movies and screening times. “It’s kind of classic cinema, while being something modern,” Mr. Sherburne said. “It’s one of the many pieces where our space is just like a degree or a grade away from what is thought of as traditional movie–going space.”

Double feature: Film Scene’s two main theaters will be housed within wood-wrapped pods. Inside, geometrically-shaped acoustical panels colored in variations of the theater’s blue and black logo replace the traditional rippled curtains surrounding the screen. The panels are lined in LED lights, “so that instead of traditional sconces, the lights that go down when the movie starts that will around those shapes,” Mr. Sherburne said.